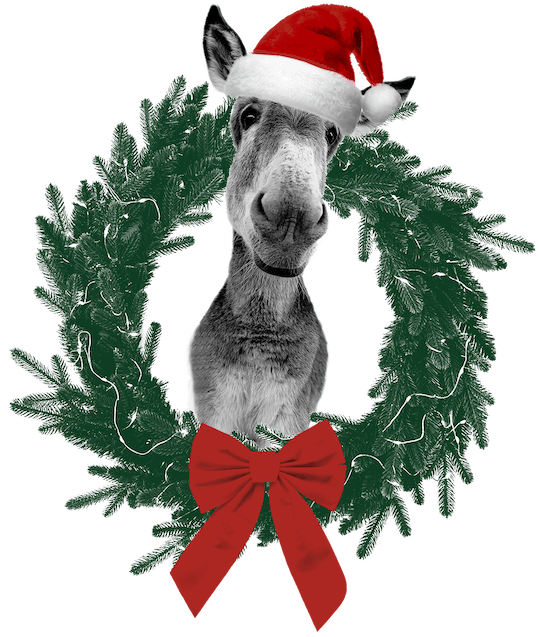 This staple of Italian-American Christmas has gained popularity in recent years, but still too few people are aware of this absurd earworm.

I don’t remember what prompted me to bring up a Christmas song in September, but I’ll never forget the look on my husband’s face when I raised the subject of “Dominick the Donkey (The Italian Christmas Donkey).” A joyless, blank stare.

“Dominick the Donkey,” I repeat emphatically, the way Samwise Gamjee says “po-tay-toes” in The Lord of the Rings. A tone that says “Did I stutter?”

“What are you talking about?” he replies.

Nothing. Just those same dead eyes without so much as a glimmer of recognition. Slowly it dawns on me in a heady blend of humor and horror. “Is this just an Italian thing?”

Normally I would take him at his word. It wouldn’t be the first time I’d assumed universality of a very specific cultural tradition. (It turns out that not everyone gets those huge hollow chocolate eggs elaborately wrapped in colorful cellophane on Easter. Just like how most people don’t have a massive antipast’ at Thanksgiving or struffoli after Christmas dinner.) I’ve come to rely on him to be my cultural wind vane, pointing me in the direction of the American mainstream untouched by Italian influence. But “Dominick the Donkey”? No. Surely he was the weird one. I felt it in my bones. OK, “Dominick” isn’t “Jingle Bells” or “Silent Night” or even “Rocking Around The Christmas Tree” but people knew Dominick... right?

I asked Twitter. The answer wasn’t the resounding success I’d hoped for, but a success nonetheless.

A pretty even split didn’t prove my point but it did help my case...

Still. It felt odd to me that only about half of my self-selected group of respondents was familiar with this ever-present aspect of my childhood holidays.

The song was performed by Lou Monte, a first-generation Italian-American from New Jersey who made a name for himself signing novelty songs in a mélange of English and Italian dialect (specifically Sicilian and Calabrese). His first hit, “Lazy Mary,” is spin on the bawdy “Luna mezz’o mare,” and is sung primarily in Italian. (You’ll recognize various versions from, among other things, The Godfather, a 1998 commercial for Prego tomato sauce, and the seventh inning stretch at a Mets game.) Four years later, Monte would release his most popular song, “Peppino the Italian Mouse,” which reached #5 on the Billboard Hot 100 and sold over a million copies. (Much to the chagrin of my younger brother, who was forced to sing this song at every family gathering between the ages of 4 and 14. Sorry Scott.) Nothing in Monte’s lifetime would top the success of “Peppino,” though he continued to release this brand of silly, Italian-themed music until the 1980s.

“Dominick,” a song rumored to have been financed by the Gambino crime family (you didn’t think we were going to talk about a song full of Italian stereotypes without talking about the mafia, did you?), fell between his first hit and his biggest in 1960. It tells the story of a kindly little donkey who helps Santa make deliveries throughout Italy (the reindeer can’t handle all the hills) to the delight of all the little Italian children. They celebrate their gifts of new clothes (made in “Brook-a-leen”... ... Brooklyn, they’re made in Brooklyn. It’s a joke because Italian accents are funny, apparently!) by dancing a tarantella with their aunties and uncles. What is best known about the song, however, is the enthusiastic, ear-piercing refrain of “Jingity-jing HEE-HAW! HEE-HAW!” In fact, if you mention “Dominick the Donkey” to people who know it, to a person, they will recite that part in response. (At least everyone I talked to when writing this article.)

“Dominick” never cracked the Billboard Hot 100, but it did come close. For decades it enjoyed a cult status, mainly in Italian-American homes but also on some radio stations, lurking at the edge of Yuletide popularity until 2011, when BBC Radio 1 host Chris Moyles urged listeners to help get the song on the UK Singles Chart. It reached a respectable #3. It currently boasts 42.5 million listens on Spotify. So, clearly, it’s not just an Italian-American thing, despite what my husband says, but it’s clear that it holds a special place in the hearts of my paesan.

For me, no discussion of Italian-American tradition is complete without consulting my family. Their recollections of the song range from “adorable” (my grandmother) to a fun community activity (my grandfather, who recalls a particularly spirited performance by a neighbor), “embarrassing” (my mom) to “hilarious” (my dad). They all associate it with childhood, either their own or something they played for their kids and grandkids. I hear multiple stories of sitting around the living room, or in a grandparents’ basement listening with cousins and siblings and parents. When I ask questions about why we kept listening to it, why they think it resonates with Italian-Americans more than other people, or what they think it says about Italian-American culture, they don’t have clear ideas. The subtext of most of their answers is (kindly) “Jamie, why are you overthinking ‘Dominick the Donkey?’”

I don’t want to overthink “Dominick the Donkey.” This is not a song that lends itself to philosophizing. It’s about a donkey in a derby hat giving presents to little Italian kids. It’s a novelty song from an era where novelty songs were a thing. But that’s kind of what baffles and interests me: this is now a 62-year-old novelty, which is in and of itself a contradiction. What about the grating-yet-endearing “hee-haw, hee-haw” kept it going in our living rooms, parlors, basements, and church parties for decades? This song isn’t an authentic expression of our Italian heritage (actual Italians from Italy are positively baffled by this ditty), but I feel like it is an expression of something authentic about our experience as Italians in America.

There’s this thing that happens sometimes. A person will bring up some aspect of Italian-American culture. Let’s say pizza. Or how we say certain words, like “mutzadell” instead of “mozzarella.” Then someone else — sometimes Italian, sometimes not — will roll their eyes and say something like “Well that’s not what pizza is like in Italy” or “It’s not ‘mutzadell’ it’s mozzareeeelllaaaaa.” It always bothered me because, on top of being pretentious and obnoxious (I’m offering you cheese, don’t correct my pronunciation, which is valid, by the way) it denies the specificity of Italian-American culture. It’s beautiful and joyful and in many ways very silly, which I say with love. (There’s just no other way to describe a group of people with a food called “gabagool.”) We’re passionate about the specific ways our heritage has developed, thrived, and maintained tradition in America. We treasure it, and we get a kick out of seeing it reflected back at us.

Which brings me back to Dominick. He’s pretty dumb, and kind of annoying, and not Italian-Italian, but he’s ours. For whatever reason, we held onto him longer than most of the country and at this point it just wouldn’t be an Italian-American Christmas without him. And so, being Italian-Americans — a people known for their hospitality (and for feeding you regardless of whether or not you’re hungry) — we welcome all of you to, Italian or not, to join us in celebrating the ridiculousness of “Dominick the Donkey” this holiday season.

More Like This
The Purple Wiggle Is A Total Thirst Trap & Moms Are Drinking Him Up
10 Parenting Lessons We Learned From Red & Kitty In 'That '70s Show'
The Best Valentine’s Day TV Episodes For Kids
Freeze! The Single From The New 'Bluey' Album Just Dropped
What Parents Are Talking About — Delivered Straight To Your Inbox