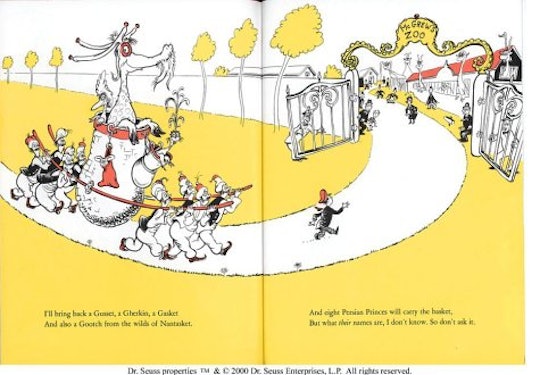 These Dr. Seuss Books Will No Longer Be Published Or Sold

Dr. Seuss Enterprises said the books "portray people in ways that are hurtful and wrong."

Traditionally, Dr. Seuss' birthday coincides with National Read Across America Day, a day when reading is celebrated and encouraged among children. This year, however, the company that oversees the work and legacy of the late children's author Theodor Seuss Geisel, has marked the day in part by announcing it will stop publishing six Dr. Seuss books due to racist imagery.

As part of that action, Dr. Seuss Enterprises announced it had worked with a panel of experts to review its catalog of published titles and decided not to license or publish six books from its list: If I Ran the Zoo, McElligot's Pool, On Beyond Zebra!, Scrambled Eggs Super!, The Cat's Quizzer, and And to Think That I Saw It on Mulberry Street, which was the first book to be published by Dr. Seuss.

"These books portray people in ways that are hurtful and wrong," the company said. "Ceasing sales of these books is only part of our commitment and our broader plan to ensure Dr. Seuss Enterprises' catalog represents and supports all communities and families."

Dr. Seuss Enterprises decided it would pull the six books from its catalog of titles last year after hearing feedback from readers, teachers, academics, and specialists, according to the Associated Press. Although Dr. Seuss remains one of the most popular children's book authors, his work has drawn increasing scrutiny and criticism in recent years — specifically, over the way Seuss portrayed minority groups such as Blacks and Asians.

In And to Think That I Saw It on Mulberry Street, for example, one character is described as "a Chinaman who eats with sticks" and depicted in the book's illustrations as having lines for eyes and running while eating rice from a bowl with chopsticks and wearing traditional Japanese Geta sandals. If I Ran the Zoo contains problematic depictions of both Asian and African people, including two characters who are said to be from Africa drawn wearing only grass skirts and three heavily stereotyped Asian characters shown in subservient roles.

But it isn't just the illustrations of Dr. Seuss' children's books that have come under scrutiny. Elements of the author's past and personal life have also drawn criticism, according to NPR, which noted that during college, Seuss wrote and performed a minstrel show while wearing blackface. Additionally, he drew a number of political anti-Japanese cartoons during World War II and was ultimately a supporter of the forced relocation and incarceration of Japanese Americans in internment camps.

Members of Seuss' family have said they believe that were he alive today, the cartoonist would acknowledge the argument that some of his work contained racist or offensive stereotypes. "I think he would find it a legitimate criticism," Seuss' great nephew Ted Owens told The New York Times in 2017. "I remember talking to him about it at least once and him saying that things were done a certain way back then. Characterizations were done, and he was a cartoonist and he tended to adopt those. And I know later in his life he was not proud of those at all."

Still, the National Education Association has, over the last four years, attempted to untangle its Read Across America program, once synonymous with Dr. Seuss, from the author. This year's calendar of book recommendations does not include a single Dr. Seuss title and President Joe Biden made no mention of Seuss in his Read Across America Day proclamation.