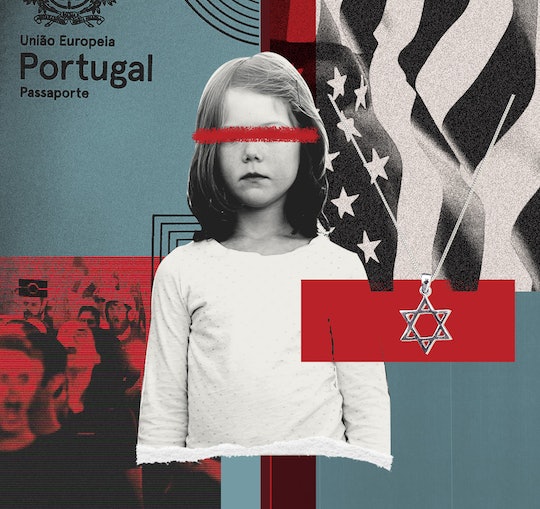 I’m Getting Dual Citizenship For My Jewish Children, Just In Case.

Antisemitism is on the rise. Are my children safe in America?

Growing up in the ‘80s in a predominately Jewish neighborhood in Philadelphia, I was surrounded by lessons about antisemitism. From an early age, I attended Hebrew school three times a week. Along with the basics of Hebrew and Jewish traditions, we were taught that Jews had never really been welcome anywhere. One Hebrew school teacher told us that growing up, she was the only Jewish child in her school, and the other kids thought she had horns under her curly hair and that she always wore skirts to hide her tail. Another reminded us constantly that most of us never would have lived in the United States if our grandparents had not been forced to flee Europe.

Holocaust survivors came to speak to my class at least a couple of times a year. My generation, we were told, bore a particular responsibility to hear the survivors’ stories because we would be the last generation to see them alive, to see the tattooed numbers on their arms for ourselves. Growing up, the Holocaust did not seem like a historical event that took place an ocean away decades ago. It felt real and present.

We were taught to never forget, to remain ever vigilant against the rise of fascism and antisemitism. By doing so, we thought, we could ensure that not only would Jews remain safe in America, but that other persecuted groups would be protected as well. We repeated the phrase “Never Again” and believed it to be true.

By the time my oldest was in preschool, we began to attend synagogue only when an armed guard was present.

I grew up and moved away from my insular Jewish neighborhood. I got married and had four children of my own. I gave three of them names from the Old Testament, not worrying when they were born in the early 2000s that their Jewish names might later make them targets. My family lived in a liberal bubble in northwest Washington, DC, one that is mostly welcoming and accepting.

But we started hearing reports of antisemitism, and by the time my oldest was in preschool, we began to attend synagogue only when an armed guard was present. Then there seemed to be a tipping point after 2016, when my children were ten, nine, seven, and two. Donald Trump had recently been elected and in August 2017 at a rally in Charlottesville, Virginia, white supremacists chanted, “Jews will not replace us.”

In October of that year, there was a massacre at a synagogue in Pittsburgh and then another deadly shooting at a synagogue in California in 2019. As the director of the Anti-Defamation League, Jonathan A. Greenblatt, said in a statement in 2018, “A confluence of events in 2017 led to a surge in attacks on our community — from bomb threats, cemetery desecrations, white supremacists marching in Charlottesville, and children harassing children at school.”

In 2019, my own daughter was one of the harassed. Even in our relatively liberal neighborhood, two children in her fourth grade class openly displayed antisemitism, one by declaring he was Nazi and the other by drawing swastikas. Whether or not these children understood the implications of their conduct, my daughter found both actions threatening and unsettling. Her school chose to wait to address these incidents with the class until several weeks after it took place — and almost inconceivably, did so on Rosh Hashanah, a High Holiday on which most Jewish children were absent from school. But my daughter, coming from a long line of Jews who had survived antisemitism, responded by wearing her Star of David necklace to school every day, even though she never again felt comfortable in that classroom.

Antisemitism continues growing to unprecedented levels in this country. A quarter of Jews in America report being the victim of antisemitism in recent years while an even higher number report changing their behavior so that they would not be identified as Jewish, according to a 2021 American Jewish Committee survey. Rabbis across the country are now learning tactical maneuvers due to the increase in violence in our communities. In January 2022, a man took hostages at a synagogue in Colleyville, Texas; this summer, disturbing antisemetic propaganda was found in neighborhoods in Nashville, Tennessee, Brigantine, New Jersey, and more across the country; a new CNN documentary covers the subject as a whole.

My children’s features reflect their father’s Nordic heritage, so in an antisemetic attack, they might be assumed not to be Jewish — and I tell them that if violence ever does break out, they should stay with their blue-eyed, fair-skinned father and pretend they don’t know me.

I am raising my children in a very different country than the one I grew up in. Nearly all Jewish parents I know have given their children “the talk,” where we discuss what we will do if someone with a gun gets into a synagogue. My children’s features reflect their father’s Nordic heritage, so in an antisemetic attack, they might be assumed not to be Jewish — and I tell them that if violence ever does break out, they should stay with their blue-eyed, fair-skinned father and pretend they don’t know me. As someone who normally encourages their children to be proud of their heritage, it pains me to tell them these things — but I wouldn’t take any chances in that type of situation. These are things I never worried about as a child.

I was beginning to believe that Jews would never truly be welcome or safe right here in the United States. I started to look for a backup plan in case things continued to get worse. I obtained Polish citizenship for my family in 2020, based on the sheer good luck that my paternal grandfather had left Poland before the rise of the Third Reich, so he was not murdered by the Nazis like his sister and so many other members of our family. But Poland was experiencing a surge of hatred as well.

I learned about Portugal’s Law of Return, which allows descendants of Sephardic Jews expelled from the Iberian Peninsula from 1492 through 1496 to obtain Portuguese citizenship. Ancestors on my maternal side had fled to Turkey after these expulsions took place, before coming to the United States in the early 1900s.

Here, I thought, was a country wiling to acknowledge its antisemitic past and to atone. It felt like reassurance that my children would have somewhere to go that would have them, not despite their being Jewish, but specifically because they are Jewish. Just days after I submitted an application for Portuguese citizenship, there was another shooting inside a synagogue, this time in Texas. This made my application seem even more urgent, the need more real. It will probably be four years or more before my family’s citizenship process is complete. My children’s father, who is not Jewish, cannot fully grasp what led me to make this decision, but he is supportive and other members of my family are gathering the documents they need to apply for citizenship as well.

If things continue to devolve in the United States, Europe may become my family’s home once again. Dealing with these ongoing threats, I take deep pride in my ancestors, realizing what they had to survive to make it possible for me to be here today. Beyond just surviving, they never hid their identity or converted, even though it would have been easier and safer to do so. I know that my daughter, whose instinct was to wear her Star of David proudly when faced with antisemitism, has inherited the fierce sprit of all the Jewish women who came before her and refused to back down. Whether her future lies in the United States or Europe, I know this strength will serve her well.

More Like This
Home Reno Culture Makes Me Feel Like I Live In A "Before" House
I’m A Mom Who Will Never Own A Home
How Do I Date As A Widow Without Guilt?
Introducing My Boyfriend To My Kid