Your One Wild Precious Life 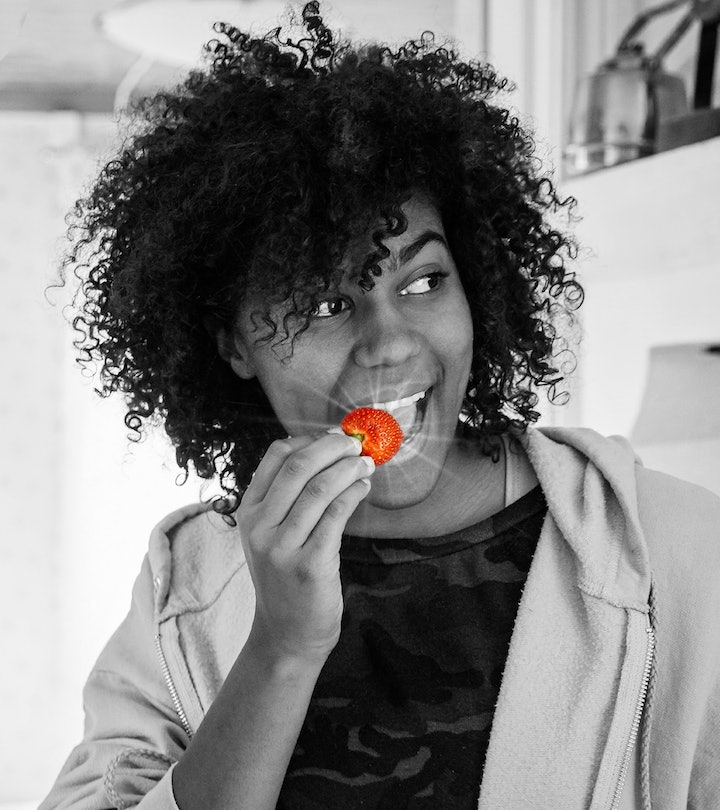 Kid scraps may be one of your main food groups, but it’s time to take back fruit.

Today, I’ve eaten three servings of fruit. That’s right: a mangled quarter slice of watermelon, a hunk of peach aged on the kitchen counter, and two slivers of apple with just enough leftover ketchup clinging to the edges to trigger my gag reflex.

Was grazing off my 5-year-old’s plate and an abandoned cutting board my only option? No. In fact, there was an entire container of organic raspberries sitting in my fridge only feet away, just calling out to be consumed. So why am I relegated to scraps? Who is this horrible troll depriving me of proper nutrients and forcing me to eat the dregs?

The truth is, for reasons I am intent on facing, this has become a habit of mine: I save the good fruit for my kids, leaving myself with the sad scraps, the brown bananas, the soft apple that’s languished in the fridge.

Just before the pandemic started, I attended a wellness reset in New York City. It was a chance to spend some of my precious free time sitting in a circle in overpriced yoga gear with a bunch of other moms and complain about how little time we have. I loved it; it was led by Katia Herman, an old friend and a wellness coach specializing in supporting burnt out moms (aka all moms). One week, she assigned us the task of eating more fruit. Simple enough — you’d think.

At our next weekly meeting, I revealed, with a hand clasped over my eyes in shame, that I basically couldn’t do it. During the process, I’d realized that I don’t eat the pricey organic fruit I buy. I leave it for my children and even my husband, who doesn’t seem to have any issue with sprinkling a few berries over his yogurt.

“Wait, you do that too?” One woman said as another began to nod. “I thought I was the only one!”

After that revelation, I began to wonder: Why? Why don’t we eat the damn fruit? I asked women I knew in real life and online and I developed a few theories.

The patriarchy made us do it.

Not to crack open the Pandora’s box previously uncovered by “peach mom” (you can refresh your memory of this particular internet brouhaha here), but let’s just say fathers don’t seem to suffer from the same inhibitions about fruit consumption. Mothers have been conditioned to put themselves last. We revel in watching our children eat the fresh produce. By holding ourselves back we are finally doing something right.

When I spoke to Herman herself about my fruit issues, she concluded it was a lack of entitlement, pure and simple. We, as women, don’t feel entitled to the fruit.

“It’s the same reason women don’t ask for raises and apologize constantly for nothing,” she said. And just as we need to get brave and demand what we deserve, we need to shove those free-range kiwis in our faces.

Let’s be honest: Those berries are not cheap. Women in households with children do about 80% of the food shopping, according to a Pew Research Center analysis of Bureau of Labor Statistics data. As the primary grocery shoppers, we’re painfully aware of how much fruit costs. The same way we save our good jewelry for… never, we parse out berries like tiny diamonds.

Plus, eating all the fruit means all the fruit is gone, which can be another reason to skip it. “Maybe I don’t eat the fruit so I don’t have to go to the store so often?” speculated Boston-based mom Adryn Sumner.

Chocolate tastes better, and you don’t have to wash it.

I’m tired. Are you tired? Washing fruit for myself seems extra. Washing anything really. That’s also why I often eat food over a paper towel instead of on a plate.

Fruit takes effort, and bottom line, I don’t have the energy. I’ve wasted it all playing Sleeping Queens and begging my kids to stop hitting each other with Squishmallows.

What better way to martyr ourselves than giving ourselves scurvy? Might win us a few days of rest and sympathy. Arghh!

We’re overcompensating for our childhoods.

If your parents fed you Cheez Whiz (not a food) or, conversely, if you had health food-obsessed parents like mine, carob (also barely a food), maybe we’re looking to do things differently. After all, we began this parenting process during the height of helicoptering, when serving a pear that hadn’t been peeled and cubed became tantamount to negligence. I’ll never forget the time I tried to serve my son a peeled clementine with some “white stuff” still on it. It’s a trauma from which neither of us may ever heal.

So we not only serve our kids fruit, but the most perfect version of it. Now, we’re like, “Whoops, our kids are picky monsters who don’t know how to do anything for themselves. We’ll do better next time!”

The planet is on fire.

The most common reason mothers gave me for not eating the good fruit? Waste. We forgo the good stuff because we know we’ll have to eat the leftovers.

“I’m trying so hard to have it not go to waste that I’m like the fruit police,” admits Oakland, California-based mom Rachel Leonard. “In the end, I’ll eat what’s leftover, which inevitably are the worst remaining parts.”

I feel this one — I really do. I am also hyperaware of wastefulness and hate to see a forlorn piece of mushy peach abandoned on a plate. I don’t want the methane from my kid’s rejected, rotting food in a landfill contributing to global warming. But I’m just not sure our climate future rests on my decision to forgo raspberries for bruised apple slices.

Brooklyn-based mom Renanit Levy says she doesn’t just eat the good fruit, she hoards it. “You have to put your own oxygen mask on first and sometimes the oxygen mask is an organic plum.”

So the next time those raspberries take their place on the shelf in my fridge, I’m going to answer their siren call, repeating my new mantra: Just eat the damn fruit.

More Like This
Why You Should Go Ahead And Have That Fourth Baby
These 30 Walmart Appetizers Are Super Bowl Snack Goals (Get It?)
14 Recipes For Sick Kids When Everyone's Tired Of Canned Soup & Crackers
25 Cookie Recipes Without Eggs That Are *Still* Delicious
What Parents Are Talking About — Delivered Straight To Your Inbox