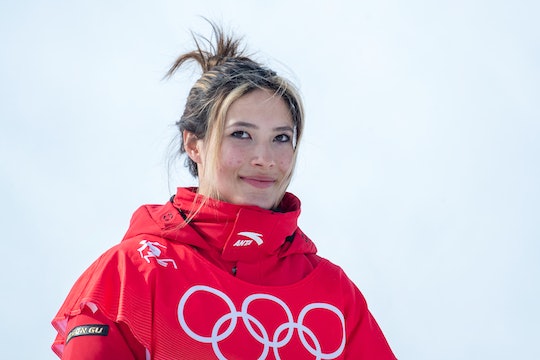 Moms really are the best coaches!

Fresh off a gold medal in the big air event, Eileen Gu, the American-born freestyle skiier representing China in the 2022 Beijing Olympics, thought a second medal this year was out of reach. Things went off the rails in the slopestyle final... literally. She fell backwards off the rails in a disastrous second run, which plunged her into eighth place. So the 18-year-old did what lots of us do when we’re feeling lost and hopeless: she talked to her mom. The pep talk clearly worked, not only launching to the podium but all the way to a silver medal.

Speaking to CNN, Gu says she wasn’t “fully in the zone,” which her her mother, Yan Gu, could see. “My mum knows me very well and she knows the way my brain works with pressure,” she said. “I perform well under it. ... So I talked to her after the first run. She was like: ‘Pretend your second run is your third run, pretend you have no more chances.’”

What followed was a truly spectacular display of skill and style. Gu appeared to be flying over the slopes, executing each spin, jump, and landing to near perfection. In fact, even after her less than stellar second run, the score put her less than a point away from gold, which went to Switzerland’s Mathilde Gramaud.

But even so, if Gu medals in the ski halfpipe, which she is favored to do, she will be the first action sports athlete in the Winter Games to win three medals in one Olympics. For now, though, she’s enjoying her second victory.

“I felt happy,” she said in a press conference after the event. “To be able to put down a run and show people what's possible when you're under pressure, is another thing that I'm proud to represent. So yeah, I'm proud of myself. And I'm happy that everybody was here to witness it.

It’s OK, Eileen: moms are used to daily, child-induced heart attacks. It comes with the territory.

More Like This
Ketanji Brown Jackson Spoke Directly To Her Daughters In Her Powerful Opening Statement
6 Takeaways From The White House’s First-Ever Parents Press Conference
Catherine Reitman Calls It Like She Sees It: “Being A Working Mother Is Impossible”
Ginger Zee Had A Perfect Response After A Troll Asked Her "Who's Raising Your Kids?"