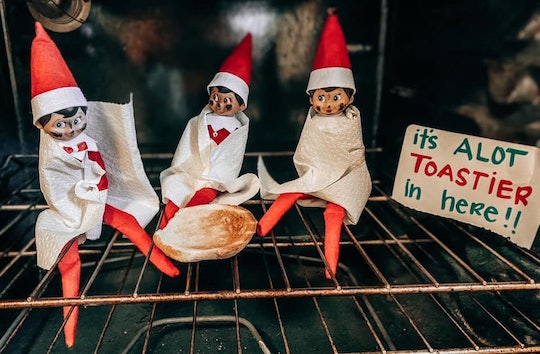 This Dad Accidentally Roasted His Kids' Elf On The Shelf Display

Parents have a lot of feelings about Elf on the Shelf. Some of us refuse to bring them into our homes. Others welcome them happily every December. And some of us go viral for cooking Elf on the Shelf in the oven. Well, you do if you're Chelsea and Matt Hightower of Overland Park, Missouri. Some important information up front: they didn't do it on purpose; everything turned out OK; it was absolutely hilarious.

The Hightower family has three elves, Jingle, Belle, and Magic, who, like so many shelf-elves, love wandering the house and settling into cute little tableaus that delight the family's three children, Braelon, 9, Mattilyn, and Quinlan, 4. The day before... let's call it "The Incident," the elf trio had spent the day in the refrigerator. Naturally they wanted to warm up and headed over to the oven. "It's A Lot Toastier In Here!" their sign declared as they sat around a toasted bun, looking cheery and wrapped in paper towel blankets.

Little did they know that it was about to get even toastier.

Chelsea headed out to run some Christmas errands (and, yes, catch some "me time") at Target for the day. Shortly after leaving, she got a call from her husband, Matt. "Babe I feel horrible." There was a long, awkward pause. Then the gruesome confession. "I cooked the elves.”

It was an elf massacre. The charred remains of Jingle, Belle, and Magic hilariously... I mean... tragically stared out from the oven.

But it's OK! "Three Targets, two Michael’s, and two Barnes and Nobles later I located all three elves," Chelsea tells Romper. "The tricky part was how all our elves were different, and my kiddos would have noticed a change. So we do what we parents do to keep the magic alive."

The Hightowers told their kids that the elves were quickly taken to the "Elfspital" where they made a swift recovery. Indeed, Jingle, Belle, and Magic were last photographed on the kitchen counter, bandaged but no worse for the wear.

"The Incident" resonated with parents all across Facebook, probably because it at once represents parents' deepest fear ("Oh no! I cremated our elves! My kids are going to be traumatized!") and deepest wish ("I hate these elves and want to set them on fire!") Chelsea's post has been shared hundreds of times and has caught the attention of media outlets across the country. The family has taken viral fame with good humor. "My husband and I laugh because of all things to go viral for we’re known as the parents who baked the elves!" Chelsea says. "I feel this incident fits in with how 2020 has gone this far."

To all the parents out there, the Hightowers, along with Jingle, Belle, and Magic, have an important and timely message, "Bake cookies... NOT elves!"