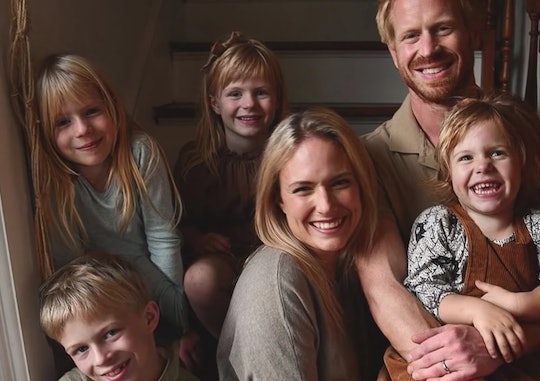 The Hidden Way blogger was 16 weeks pregnant with her fifth child at the time of her passing.

“A few days ago we learned from the state Medical Examiners Office that the official cause of death was a pulmonary embolism,” Mitchell’s family wrote in an update to the GoFundMe campaign established shortly after the influencer’s death. “Although it is challenging to wrap our heads around how this could have happened, we know all first responders and medical personnel did everything they could to help.”

Both Mitchell and her unborn child died unexpectedly on Dec. 22 after collapsing at home. "Em was having her morning coffee and toast when she suddenly became unresponsive,” a friend of the family wrote in the GoFundMe campaign’s initial message. “Despite the prompt attention of her children, husband, father and other medical personnel, all valiant efforts to resuscitate were unsuccessful."

According to the Mayo Clinic, a pulmonary embolism is the blockage of a pulmonary artery in the lungs that is most often caused by one or more blood clots having traveled up to the lungs after forming in deep veins in the legs.

Mitchell is survived by her husband Joseph and four children Finn, Isla, Edie and Lulu. The couple's fifth child, which they had reportedly planned to name Joey, did not survive Mitchell's unexpected passing, according to TODAY.

"Our hearts are broken and her joyful presence will be greatly missed by so many," a statement shared on the Mitchell family's GoFundMe campaign read. "Em made a big impact in so many people’s lives, and this loss is incomprehensible for anyone who knew her. Our friend was a dedicated mom and wife, she had a heart for the Lord, and loved her children so dearly."

Over the last few years, Mitchell had been writing about her journey through motherhood, which included homeschooling her children, on both her blog The Hidden Way and her accompanying Instagram account @the.hidden.way. On Instagram, where she often shared photographs of her kids playing in the yard or hard at work in the family's homeschool room, Mitchell had 160,000 followers.

In her most recent Instagram post, Mitchell revealed she planned to welcome her fifth child via a C-section. "My plan was never to have five c-sections," she wrote. " But you can be sure I’m darn thankful for them. Even if I did grieve with my first at missing out on what the ‘real motherhood experience’ was supposed to be."

She went on to explain that there was no right way to become a mother and that no method of bringing a child into the world was better than another. "However, your baby gets here, just know YOUR EXPERIENCE is valid and worthy," she wrote. "YOU are no less a mother if you needed emergency medical intervention, had a planned c-section, or an epidural. You aren’t a ‘better’ mother if you had a home birth or an unmedicated vaginal birth. And if you grew your brood through adoption or surrogacy or family blending? Those are YOUR babies and YOU SIT PROUDLY at the table of motherhood.⁣⁣It’s not a competition."

A friend of the Mitchell family said funds raised via the GoFundMe campaign started shortly after Mitchell's death would go towards helping her husband and four children "adjust to life without" Mitchell and help cover the costs of the children's education in 2021.

This article was originally published on Jan. 4, 2021