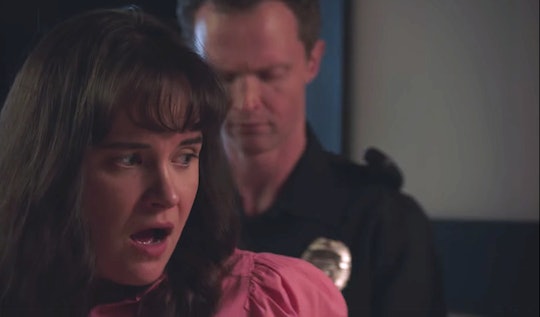 “MAGA-GOP want women arrested for having an abortion. This is what that looks like.”

As midterm elections draw nearer, many Democratic candidates are making abortion a central component of their campaigns in the wake of the Supreme Court’s overturning of Roe v. Wade, which ended federally protection abortion rights. A new campaign ad for California Congressman Eric Swalwell has taken a particularly dramatic (though not unprecedented) approach to the issue of protecting reproductive rights by imagining a scenario in which having an abortion was criminalized in a new ad titled “Lock Her Up.”

“MAGA Republicans want women arrested for having an abortion,” the congressman wrote in an introduction to the ad on Instagram and Twitter. “This is what that looks like. #LockHerUp.”

The ad features a family — a husband and wife with a young daughter and a baby — having a cute family dinner. Soon, however, flashing lights are visible and there’s an unexpected knock on the door. The couple opens the door to two grim-faced police officers.

“Mary Anderson,” one says, “I have a warrant for your arrest.” Her crime? Terminating her pregnancy. Confusion, anger, and sorrow ensue before the woman is handcuffed and ushered away. As the scene ends, a black screen reads “Elections have consequences. Vote Democrat on November 8th. Stop Republicans from criminalizing abortion everywhere. Protect women’s rights and freedom.”

The new ad, “Lock Her Up” imagines an America where abortion is criminalized.

The ad premiered on MSNC’s The Reid Out, where Swalwell described the ad as being informed by his experience as a prosecutor. “When I looked at the Republicans’ abortion laws ... I thought ‘Well, what is this going to look like as it plays out across America’ and it’s that scene right there,” he said. He also noted that it was important to him to depict a family in the narrative, since abortion is a subject that affects not just individuals but families. In fact, the majority of women who have an abortion already have at least one child at home.

For some voters, it would seem, the ad has hit home, with many describing “Lock Her Up” with words like “poignant,” “powerful,” and “brutal.” While some on social media have derided the ad as a “scare tactic,” and “leftist fan-fiction,” (and indeed, despite consequences for abortion providers no state currently prosecutes those who have abortions, though legislation has been introduced in some states) others reacted to the content of the ad positively, noting that arrest was an appropriate outcome those who have had an abortion. “Add a lethal injection scene to the end and it’d be perfect tbh,” tweets @CL0WNPlECE.

And yet polls show that exceedingly few Americans view the complete abolition or criminalization of abortion as ideal. Research from the Pew Research Center shows that a majority of Americans believe abortion should be legal in all or most cases. Even accounting for the most extreme views, abortion rights advocates have a considerable edge: only 8% believe the procedure should always be illegal as opposed to 19% who believe it should always be legal. Democrats are banking on polls like these as they put their support for abortion rights front and center in their campaigns.