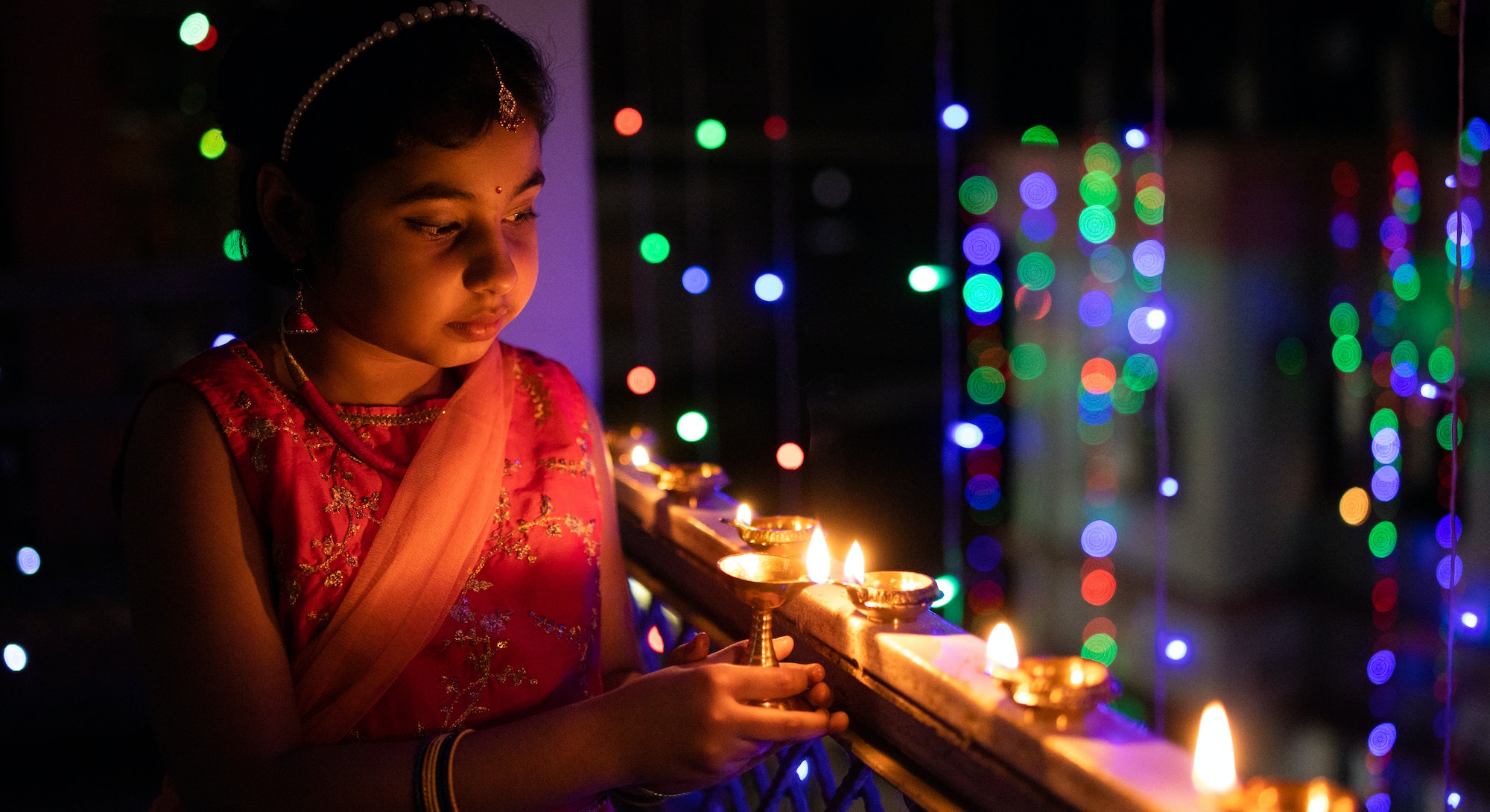 The “Light Vs. Dark” Story Of Diwali Really Needs An Update

This binary is oversimplified at best, and our children deserve better.

Come fall, traditions and festivities connected to our cultural lives, past and present, fill our homes. In mine, conversations are abuzz about Diwali, the South Asian festival that falls on October 24 this year. As always, descriptions of Diwali are flooding the online parent groups I’m a part of. “The Festival of Lights symbolizes the victory of light over darkness, good over evil, and knowledge over ignorance,” goes the refrain. “Not correct,” replies my inner voice.

I grew up in a polytheistic Hindu household and this stock phrase makes me uncomfortable on many levels — first and foremost because of the reiteration of that insidious dynamic: lightness and whiteness symbolize “good” and darkness and blackness symbolize “bad.”

The narrative is oversimplified at best, and dangerous at worst. For context: Diwali is based on the Ramayana, an epic poem written nearly 2,500 years ago that is one of two main religious texts for Savarna Hindus, many of whom read the story like a historical event. Diwali is just one of the myriad names and interpretations of the religious celebrations occurring right now on a shared lunisolar calendar, stretching from the Caribbean to Southeast Asia.

In the version I grew up listening to, the story has two main protagonists. Rama, the King of Ayodhya, and Ravana, the King of Lanka, are both celestial beings, Rama a god and Ravana an asura, a type of being that is an enemy of the gods. Though they are not human, both have been endowed with earthly qualities — the first virtuous, and the second evil. The conflict arises when scholar-turned-egoist Ravana, overtaken by lust and power, abducts and captivates Rama’s wife, Sita. The ever-mindful Rama, who represents an ideal personhood of sorts, follows Ravana in search of Sita. Ultimately, he kills Ravana, rescues his wife, and returns to his kingdom to find his city lit up for their welcome.

Today, communities celebrate this with the symbolic lighting of candles and clay diyas — hence, the “festival of lights” — but I contend these lights are a welcome ritual, and not a celebration of Rama’s triumph over “darkness.” The Diwali story we hear in the mainstream today makes Rama a “flawless” god, and Ravana a “demon” king. In illustrations, they are usually represented as literally dark and light brown. But historians argue that this interpretation is far from the Ramayana’s earlier versions.

“The asura was meant to be an allegorical figure that represents a certain quality, and not a member of a community,” renowned poet, translator, and scholar, Professor H.S. Shivaprakash, tells me. But, he says, “In certain situations, a certain community becomes identified with the asuras. When that kind of dangerous translation happens, we have to watch out.”

Even as a brown-skinned person, I'm taught by the broader culture to view those dark like me, or darker than me, as less than — the prevailing message constantly framing darkness as lazy, ignorant, incompetent, “illegal.”

What Shivaprakash is asking us to pay attention to is the fact that like languages, cultural narratives are living — they change with time. Over hundreds of years, the Diwali narrative has absorbed the dominant views, those of the upper castes, or the colonizers. It has absorbed the collective beliefs of the times — like slavery and scientific racism — that infiltrated the local cultures through trade and travel. When stories like this merge with our colorist beliefs in modern society, our bias towards people with darker skin reveals itself, particularly if they are working class, “lower” caste, Dalit, or don’t conform to Eurocentric beauty ideals such as sharp facial features, straight hair, and lean bodies. Even as a brown-skinned person, I'm taught by the broader culture to view those dark like me, or darker than me, as less than — the prevailing message constantly framing darkness as lazy, ignorant, incompetent, “illegal.”

In more recent times, media and popular culture have furthered this narrative for our children. Since the 1970s, TV series, comic books, videos, games, and children’s toys and books have adapted the story of Ramayana to a colorist and racist global media culture. The wildly popular Indian illustrated children’s book series, Amar Chitra Katha (ACK) — launched in the late 1960s to keep a new generation of kids connected to their cultural heritage — is just one glaring example. The Atlantic drew attention to colorism in ACK a few years ago, amplifying what academics had been documenting for some time. In nearly all the stories, “good” characters are represented as fair-skinned, points out writer Shaan Amin (while noting that “canonically dark-skinned gods are shaded blue”).

“By contrast,” he writes, “‘Demons,’ ‘ruffians,’ and ‘ruthless killers’ are given dark brown skin.”

ACK comics are popular among the diaspora, too, while other parents turn to online resources. On YouTube, where one video has amassed close to 6 million views, you can see representation styles similar to ACK comics.

Suhani, 10, a colleague’s daughter, has been reading Indian comics since she was little. In a conversation with me, she describes the people depicted in ornamental detail. She keeps returning to the fact that gods are peach-skinned, even when most Indians are brown. With utter disbelief in her voice, as if to say why do I have to explain this, she says, “All light-skinned people are European. You’re basically saying your gods are European.” She points out to me the stark difference in skin colors of gods and asuras, and says she'd like to urge children’s bookmakers to use a similar palette of browns for both gods and asuras.

Children love and learn from stories. Their sense of ethnic, cultural, and racial pride comes from these stories, which in turn inform the stories of “home” and “belonging” they tell themselves and others. How does the message of light and good vs. dark and evil settle in with their daily life, a place in which anti-Black, racist, casteist violence overwhelms news cycles, and if educational researchers are right, their schools as well?

My son, whose quest to identify as “different or same” in a predominantly white school began at age 4, is all too aware of skin color-based representations. He came home one day and described what appeared to be a racist incident involving his friend, whose skin was darker than my son’s. Then, facing his palms towards me, he said, “But, look at me, Mama, I’m light brown.”

He’s 10 now and tells me, “In TV shows or movies they always show white always wins and the Black person is in jail, saying, ‘Please let me go!’” He’s conflicted about Diwali: he sees the story of Diwali as racist — but he is determined to not cancel an age-old festival.

Focusing on the complexity of the characters, I think, is another way to undo the damaging binary of “light” vs. “dark.”

I realize that it’s up to me to bridge the gap between what I have learned and what my son is learning about Diwali. Conscious parenting allows us to reflect on traditions and language choices, and “transform” them, too. As parents, we have to move from parental ambivalence to creative, thoughtful, and inspired parental agency. As a little girl, I never rejoiced at the climax leading up to Ravana’s death. I came to view it as a passing on from the trappings of egotism and arrogance. Focusing on the complexity of the characters, I think, is another way to undo the damaging binary of “light” vs. “dark.”

I ask my son to take part in a mini art project with me, and tell him my version of the story — in which Rama and Ravana live in heaven and, just like in fiction writing, or enactments of a play, they have each been given a character to perform before an audience on Earth. I expound on the fact that Ravana was a scholar and a good friend of another god, Shiva. That he is neither “dark” nor “bad” even if the story that is becoming popular makes it seem so.

“Rama and Ravana are god and asura,” I say. “They can each be heroic and villainous — do they need to be ‘hero’ and ‘villain’? You know we’ve talked about how a ‘bully’ is not a bad person, even if what they’re doing might be wrong?” We sit down with our art materials, tasked with drawing a scene that resolves the conflict between the two narratives. My son hands me a marker to color Rama and Ravana in a medium brown, whom I’ve shown engrossed in deep intellectual debate.

My son’s drawing is much better. He draws a bountiful image of heaven, with two palatial dwellings on either side of the top half of the page. A shared garden sprawls between the two palaces, with a lush multi-tiered fountain and trees swaying in the breeze. In the lower quarter of the page, he depicts the Earth, with “nukes, and missiles and stuff,” falling into disarray. Back in heaven, Rama and Ravana are seen on their balconies: Rama is with one member of the Holy Trinity (Vishnu), and Ravana with another (Shiva). The text reads: Ravana is misunderstood because neither Rama nor he are good or bad. Even if they are “good god” and “bad god.” Changing his handwriting slightly, as if to show a change in font, he declares, Diwali is the Festival of Lights. And a celebration of Good over Evil.

His minimalistic editing skills aren’t lost on me. He unlinks the story about Diwali from the problematic light/dark aspect and the messages that come with it.

Of course, other parents who celebrate Diwali can make narratives for their own children that are tied to their subcultures, geographies, religions, and castes. Questions will emerge from this lesson, and that’s a good thing — and it’s a way of thinking that can apply to so many other instances. Is the girl who cheats on class tests to avoid getting into trouble at home “a cheater”? Is Tesla and SpaceX founder Elon Musk, who does not pay his taxes, but works hard and is very smart, a good guy? Does a TV show that uses Black or non-Black people of color as comic relief make you laugh?

As parents, we have to help our kids process and cross-reference these narratives with their daily living contexts. Perhaps that’s just one more way we can prepare them to deliver to us that promised, equitable society that we are trying so hard to build. That is something worth lighting a diya for... and every bit the Diwali my family and I will be celebrating this year.