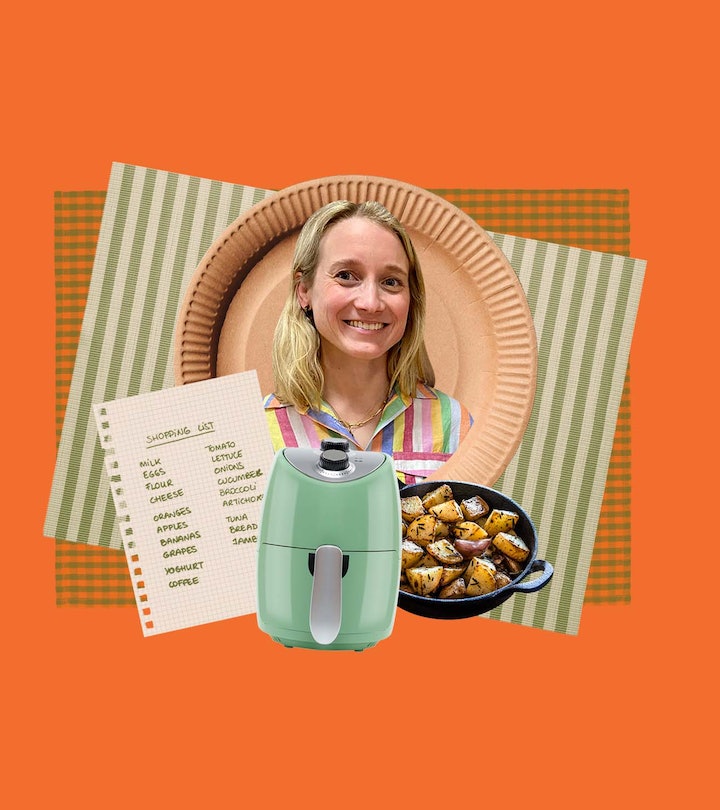 Grace Farris Wants To Talk About Her Air Fryer

The doctor, mom of two, and cartoonist shares how her family eats.

As a doctor and the mom of two young boys, Grace Farris was busy enough. But she’d always drawn for fun, and eventually her illustrator’s eye turned to sketching vignettes of daily life with two children under 5. In 2017, she began to share her comics with friends as @coupdegracefarris on Instagram.

You can probably guess what happened next: Those friends shared with friends of their own, and so on. “At first I thought what I was drawing was unique to me, but it resonated with people,” she says. “That’s when I started to think about exploring motherhood through comics.”

And now Grace Farris, M.D., an assistant professor at UT Austin’s Dell Medical School, is also an author. Mom Milestones: The TRUE Story of the First Seven Years turns the idea of a baby book on its head, marking key moments in a mother’s life rather than her child’s. Naturally, that includes plenty of gently humorous looks at just getting your kid to eat. Y’know, the way mothers do.

Here, Farris tells Romper about her family’s approach to food — who does the cooking, how they handle picky eaters (she’s got some), and why she’s become an air fryer evangelist.

Your book looks at the first seven years of life as a mom. How has your cooking changed over the years?

I remember getting really into chopped salads with a newborn. My mom introduced me to those, as a way to get lots of nutrients and feel more energetic. That was 10 years ago, when kale was coming back. We were living in a city, Boston and then New York, and two years ago we moved to Austin. I think that’s the biggest change in our eating — we didn’t do a lot of grilling before, but now there’s a grilling culture and we have outdoor space. Since we moved here, my husband does a lot more cooking. I still do a little, but it’s scaled back.

Do you want to talk about the air fryer now?

I’ve had a very fraught relationship with the air fryer. At first, it was just taking up a huge amount of counter space, but then someone said to me, “All I want from life is for everything to be a little bit crispier.” And now I’ve taken that approach. It’s great for reheating, and it’s super-fast for the kids’ chicken nuggets. And I have made a ton of roasted potatoes. I worked as a doctor during the beginning of the pandemic in New York. I would come home and roast potatoes, and my husband would be like, “Are you just having potatoes?” That was my big coping technique, or one of them.

Tell me about your approach to meal planning. Do you plan on Sundays, or are you more of a winging-it kind of family?

I would love to do meal planning. I definitely understand how it’s useful. I’d love to do Meatless Monday, Taco Tuesday, but no, that doesn’t happen. I’ve had to psychologically lower the bar for myself, because you can get caught up in a lot of aspirational motherhood ideals. And for me that would be trying to roast a chicken and using it in various ways throughout the week. We do a lot of rotisserie chicken.

You have to be honest with yourself about what types of things bring you joy. I realized over the last two years that my husband enjoys preparing dinner, while I find it to be a lot of custodial work, a bit of a grind. Especially when you pair that with packing the school lunch and cleaning out the school lunch, and heating up a frozen waffle in the morning.

Do you have picky eaters?

Definitely. I feel guilty because I think I facilitated that. I’ve been doing a short-order cook situation. As they’ve gotten older, they’ve become a little bit less picky — I think you could draw a sinusoidal wave of how picky they are. When they were 2, they would eat everything, and then as they realized they could control stuff, they would be pickier. Now they’re getting older and it’s a little bit better again.

Did you do anything to address it?

I think I’ve tried every technique, like putting everything in tiny ramekins. It seems like the more social it is, the better. If there are a lot of people sitting down with communal serving dishes and whatnot, that has a different effect than just the immediate family. And of course, during the pandemic that was rather limited. It’s been nice, now that people are able to get together more.

What’s your attitude towards leftovers?

I think they’re great. The problem is, sometimes you just forget about them, or something will come up in the evening. I work a fair amount of evening shifts, too. I do think the air fryer is a nice option for heating up leftovers, or even the French fries the kids didn’t eat that are in a takeout box. That’s what an air fryer is made for.

In terms of meal prep and cleanup, is it a family thing? Do the kids pitch in?

We both do some, it’s split between the two of us. The kids, no, we have not been successful at involving them. Let me know if you have any tricks.

What’s a typical weeknight dinner look like for your family?

Our most successful dinners will be if my husband’s grilled something, usually a steak or marinated chicken. The kids are usually into that. We’ll have a salad with it and maybe some potatoes.

What’s one recipe you have memorized?

I have a standby chopped kale salad. I used to make it as a nursing moms’ salad when I had tons of friends having babies. I’d bring it to them with cookies or ice cream, so it wouldn’t seem like it was a weight-loss thing. I chop up a bunch of kale and add walnuts and tiny cubes of cheddar, potentially some ham, and then I toss it with the Money in the Bank salad dressing from Dinner, a Love Story.

What’s your comfort food? What do you eat when you’re stressed?

What’s a food you buy for your kids but can’t help eating yourself?

What’s one thing related to food you swore you’d never do as a mom, and now you find yourself doing it?

I’m not sure if this was before I was a mom, but I really like the direction of Virginia Sole-Smith, not making food feel connected to anything moral. But now we’re in a stage where the kids will be hungry at bedtime. That’s where I struggle the most, how much to let them eat right before bed. Usually I’ll give them some uber-healthy options because I’m not convinced the hunger is real — they’re just trying not to go to bed. The biggest thing is to try not to make them feel bad about eating certain things. That, I definitely want to avoid.

What was food like in your home when you were growing up?

Both my parents cooked, but never anything elaborate. We had classic ‘90s meals like spaghetti with meat sauce, simple chicken. And then as Seinfeld entered the vocabulary, we would have a big salad for dinner, like Elaine had. And I was the Oreo queen in my family. When I went away to college, they realized who was eating all the Oreos. We didn’t have a lot of dieting culture, but I definitely absorbed all the ‘90s advice, like “if you’re hungry have a glass of water,” which is kind of bogus.

Do you have a go-to meal you pull out when everybody’s tired and cranky?

I have a pretty common one, which I’ve named Gala Apple Pasta. It’s for when we haven’t been to the grocery store in a while and we’re almost out of options. I’ll make spaghetti or angel hair with butter, then slice up an apple on the side for our kids. And then I’ll have a salad with it, and put apples on my salad. I think there’s an aspect of preparing the kids' pasta they seem to like, the sense that somebody’s taking care of them.

If your kids oversaw the menu, what would your family be eating?

This last question is just for you. Say your husband has taken the kids somewhere. You get to eat whatever you want. What would it be?

That would revolve around me steaming an artichoke and making a variety of dips. That’s definitely something where I think, “I’m going to have a nice evening with an artichoke.”

In Family Dinner, Romper chats with notable people we like, to find out how their family does dinner. This interview has been edited and condensed for clarity.

More Like This
What I Want To Tell My Kids About Anxiety When The World Feels Unsafe
Infertility As A Stepmom Means Double The Alienation, But So Much Love
'Everything Everywhere All At Once' Was Like Peering Into My Mother's Psyche
Here’s What You Need To Know About That Viral 1960s Baby Formula “Recipe”