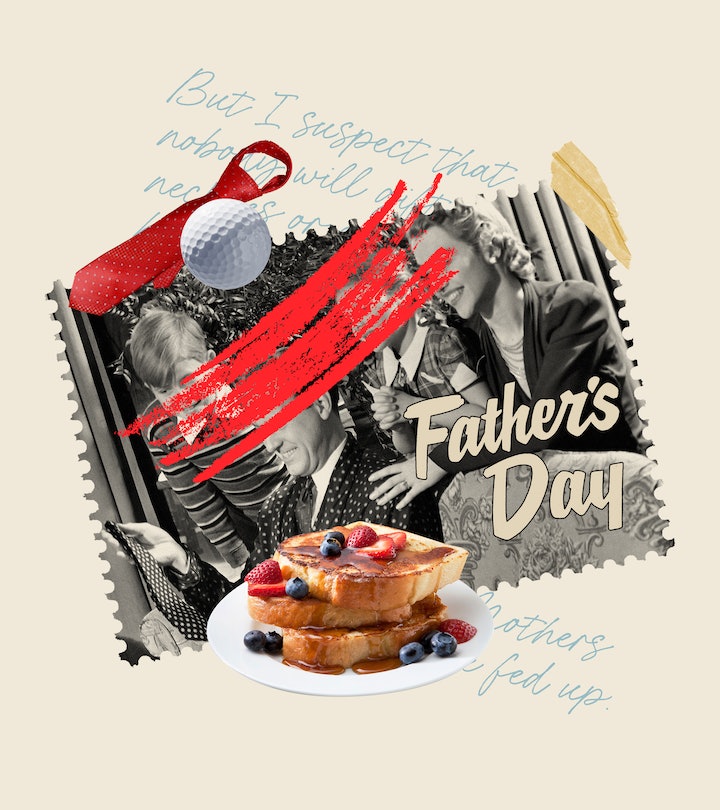 Time’s Up For Father’s Day

The signs of an impending drop in the popular opinion of fatherhood have been clear for a while.

My father always cooked breakfast on Sunday mornings. He submerged half-inch thick slices of challah, leftover from Shabbat, in a cinnamon-heavy mix of beaten eggs and sour cream. The hard thing about French toast is mastering the art of the dip — too much time in the batter and it gets soggy, too little and the center remains stale, bland, and dry. My own dad’s technique was inconsistent, and the cheap Teflon-coated aluminum griddle pan he used was bad at evenly conducting heat. But for little kids, all French toast — undercooked or heavily browned — is perfect once it’s drowned in maple syrup.

I remember standing beside Dad at the stove, watching slivers of margarine sizzle and melt into oil. I had so much admiration for my father in his role as breakfast king. Many years later, I owned and operated a high-volume diner in Philadelphia’s Reading Terminal Market. By then, I was a father to two toddlers and in my warped imagination, I was like the archetypal hero-prince ascending Dad’s breakfast throne.

Surrounded by vinyl, chrome, Formica, and neon, I played host to thousands of Mother’s Day and Father’s Day celebrations. These are two of the busiest days of the year in the diner business. Folks would wait in line for French toast and bacon while Patsy Cline blasted from an antique Wurlitzer jukebox. Every year, I would swagger through the dining room, telling customers that both Hallmark-holidays looked exactly the same from my perspective.

I knew that the breadwinner-fathers loved it when I reinforced their delusional narratives of paternal martyrdom.

It wasn’t true. Mom was usually at both events, carrying extra handy wipes, thinking about food allergies, and cutting buttermilk pancakes into bite sized pieces. But I knew that the breadwinner-fathers loved it when I reinforced their delusional narratives of paternal martyrdom.

It’s been almost two decades since I retired from restaurant work, but for years I made the same joke in just about every conversation I had during the week leading up to Father’s Day. This year, I won’t do it though. In June 2021, less and less of the traditional fatherhood identity narrative seems worthy of celebration. We’ve reached a crisis point for traditional masculinity.

The signs of an impending drop in the popular opinion of fatherhood have been clear for a while. The #MeToo movement broke the code of silence around powerful men committing everyday acts of sexual violence. Four years of Trump’s boastfulness was evidence that patriarchal arrogance is not a badge of strength, but rather a toxic symptom of narcissistic shame and insecurity. Stay-at-home orders amplified the gendered inequity of household work. By summer 2020, just a few months into the pandemic, 80% of mothers reported taking responsibility for most, if not all, the family’s childcare and Zoom school duties.

Women and mothers also took the biggest economic hit during the pandemic, a net loss of 5.4 million jobs in 2020 (compared with 4.4 million lost by men). This suggests that all the rhetoric around the 82-cents-on-the-dollar pay gap may have been distracting us from screaming about a much bigger problem: employment is still not equally distributed. Gender essentialist fallacies about women’s innate maternal instinct for nurturing and multitasking fortify the biases which direct a disproportionate number of working women toward low-wage care and service jobs. Meanwhile, men and fathers retain their privileged position in the professional, social, and cultural hierarchies.

Worse still, we’ve now seen how dangerous men’s current relationship to gender can be for the rest of us (and themselves). Men were much less likely to take basic pandemic precautions seriously. Many men viewed masks, in the words of journalist Emily Willingham, “as emasculating face condoms that must be rejected.” Today, men continue to be about 10% less likely than women to get vaccinated.

This year, plenty of families will still head out for breakfast on Father’s Day—waffles, eggs benedict, and bananas Foster sound like a delicious way to initiate a post-lockdown summer. But I suspect that nobody will gift neckties or golf balls with sincere gratitude. Mothers are fed up.

Dads are confused. According to a 2015 PEW report, 57% of fathers identify parenting as something “extremely important to their identity.” But cultural expectations and popular images of fatherhood identity are misaligned with their reality.

It’s time for us to acknowledge that our behaviors and habits of mind have unconsciously (and in many cases, consciously) reinforced systemic misogyny and homophobia.

Some dads respond to this new uncertainty with defensiveness. They blame women, mothers, critical theory, cancel culture, and the “identity politics” of elite liberal college professors like me. They don’t recognize that the real problem is their own failure to imagine something different. Without new role models or strong father figures that align with the current cultural ethos, dads struggle to feel confident and secure about their place in the world.

What I think dads really need this Father’s Day, is to “man up” to feminism. It’s time for us to acknowledge that our behaviors and habits of mind have unconsciously (and in many cases, consciously) reinforced systemic misogyny and homophobia. We need to adjust the ways we interact with our families — to pivot away from father-knows-best authoritarianism. Surely, that's not what we want to model for our children.

So where to start? You might try learning to make French toast. Wake up early, cook it for the whole family this Father’s Day, and show them that their Dad isn’t stale, bland, and dry at the center, either.

Jordan Shapiro is the author of the new book Father Figure: How to Be a Feminist Dad.