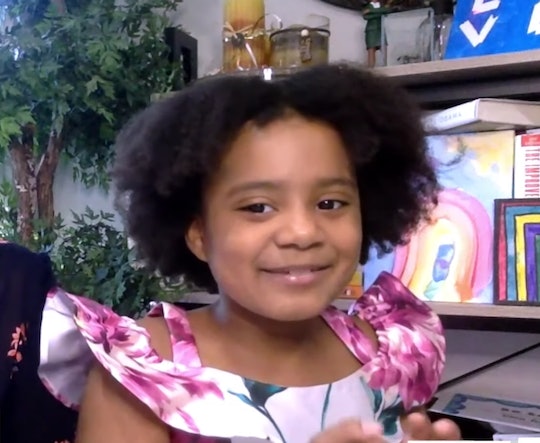 Morgan Bugg was disappointed to learn she couldn’t give her Freckle avatar hair like hers — until she reached out to the educational app.

Seven-year-old Morgan Bugg was disappointed to learn the educational app her first-grade class used as part of its learning curriculum didn’t have options for customizing her avatar in the app to look more like her, a Black girl with natural hair. It’s not that users can’t give their avatar different hairstyles, it’s that the app didn’t have options that resembled what Bugg describes as “Black-girl hair.” The app didn’t that is, until the first-grader convinced the makers to add more racially diverse avatar hairstyles.

Bugg told the Washington Post she’d worked hard to earn points on Freckle, an education app that uses game-based play to inspire learning. Her motivation? Trading in those points at Freckle’s online store to model her avatar after herself. But there was a problem. “There was no Black-girl hair,” the 7-year-old from Brentwood, Tennessee, told the paper. “I felt super sad.”

According to the Tennessean, Freckle’s online store only had one hair option for Black males but none for Black girls. Bugg’s disappointment was evident and spurred her teacher, Kelley Anne Joyner, to pull her aside for a chat. When Bugg told her she was upset the Freckle app didn’t have avatar options that looked like her, Joyner asked how the two could make the situation better and Bugg proposed writing to the company behind the educational app.

While Joyner typed up the pair’s message to Freckle, Bugg drew a few examples of Black girl hairstyles on a piece of green construction paper to send alongside it in case the app needed some ideas. According to the Washington Post, she drew styles she and her sisters are fond of wearing: braids, natural curls, and an afro.

Joyner told the Williamson Herald that at first, she received only an automated reply from Freckle. Weeks went by with no word from Freckle or Renaissance, the company behind the app. The silence was especially frustrating to Bugg, who, as Joyner told the Washington Post, kept asking if a response had come in.

Finally, Freckle wrote back. “We have some fantastic news for you and your students,” the Washington Post reported the company said in an email to Joyner. “Our product team recently added more hairstyles to the Piggy Store based directly on your feedback!”

The news earned a celebratory dance from Bugg, according to the Williamson Herald.

But the educational app didn’t stop at Black hairstyles. They also added a wheelchair, head coverings for students who don’t want to show their hair, and gave users the ability to change their avatar’s skin color. “Our mission at Renaissance is to accelerate learning for all children and adults of all ability levels and ethnic and social backgrounds, worldwide,” Renaissance told the Tennessean. “To that end, Renaissance is committed to producing content that is diverse, inclusive, and equitable for all learners.”

What’s more, the company applauded Bugg for being a changemaker and advocating not just for herself, but for other young Black girls.

“It’s your bravery and leadership that fuels us as an organization to drive our mission forward,” the Washington Post reported Ryan Blackwell, Renaissance’s chief revenue officer, told Bugg in a letter. “We are honored to amplify your voice across Freckle to help many girls like yourself and my 2 daughters identify themselves in the content we provide.”