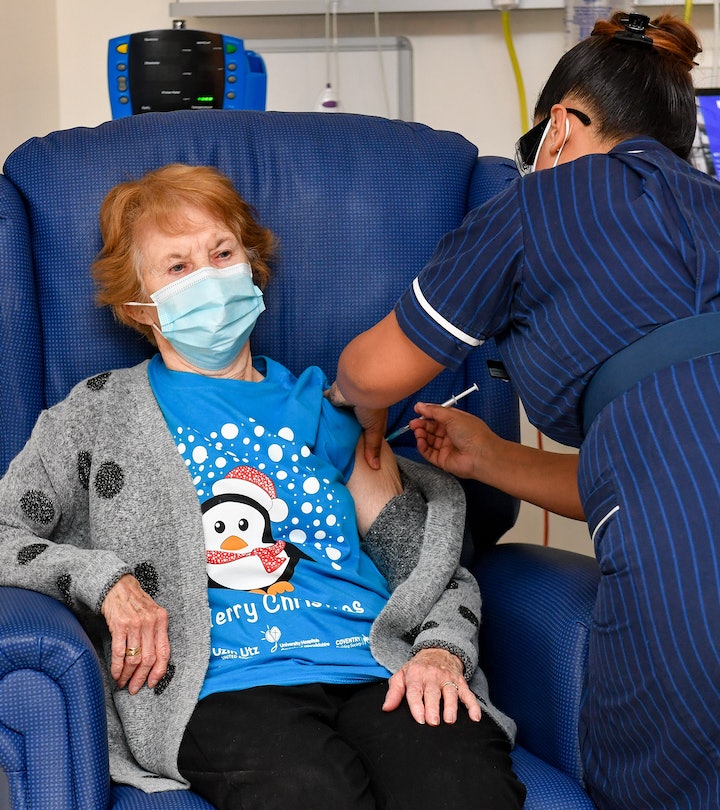 Margaret Keenan called the vaccine "the best early birthday present" she could have wished for.

With one jab administered roughly a week before her 91st birthday, Margaret Keenan of the United Kingdom became the first person to receive the Pfizer COVID-19 vaccine on Tuesday. After having spent much of the year alone, the 90-year-old grandmother told reporters she looked forward to finally being able to see her family and friends.

"I feel so privileged to be the first person vaccinated against COVID-19," The Telegraph reported Keenan said Tuesday after receiving the vaccination. "It's the best early birthday present I could wish for because it means I can finally look forward to spending time with my family and friends in the New Year after being on my own for most of the year." According to the publication, Keenan has two children and four grandchildren.

Keenan received a dose of the Pfizer-BioNTech vaccine at 6:31 a.m. local time from the staff at University Hospital Coventry, the Associated Press reported. But while she is believed to be the first person in the world to receive a COVID-19 vaccine, she certainly wasn't the last. Dozens of hospitals around the country are expected to administer the recently-approved vaccine as part of the national immunization campaign rolled out by the U.K.'s National Health Service (NHS) on Tuesday.

According to CNN, Keenan described the actual vaccination jab as "fine," saying she "wasn't nervous at all" to receive the vaccination, which was given emergency authorization by British regulators last week. "This is for a good cause so I'm so pleased I had it done," CNN reported Keenan said. "This is a terrible, terrible disease so we do want to be rid of it."

The 90-year-old grandmother advised anyone hesitant about obtaining the vaccine to go for it. "My advice to anyone offered the vaccine is to take it," The Telegraph reported she said. "If I can have it at 90 then you can have it too."

The second person to receive a COVID-19 vaccination was William Shakespere, an 81-year-old patient from the University Hospital Coventry's frailty ward, who, according to CNN, kept his grandchildren's artwork close at hand as he received his shot.

The United Kingdom has so far received 800,000 doses of the Pfizer-BioNTech vaccine, enough to vaccinate 400,000 people against the novel coronavirus, according to the Associated Press. Nursing home staff, those delivering the vaccine, and individuals over the age of 80 who are hospitalized or who have outpatient appointments already scheduled will be the first to receive the vaccination, the news outlet reported. As a result, British health authorities have warned the nation's immunization campaign would likely take a number of months to complete and require citizens to continue to adhere to public safety measures and restrictions on social gatherings.

"Help is on its way and the end is in sight, not just to this terrible pandemic but to the onerous restrictions that have made this year so hard for so many," British Health Secretary Matt Hancock told the BBC. "But even while we can now see the route out, there is still a long march ahead. Let's not blow it now."

Across the pond, the U.S. Food and Drug Administration (FDA) has yet to approve the Pfizer vaccine. The federal agency has, however, recently released a detailed analysis of the vaccine in which they noted there were "no specific safety concerns identified that would preclude issuance of an [emergency use authorization]." While the FDA reported serious reactions to the vaccine were rare, common side effects included headaches, fatigue and reactions at the site of the injection. The FDA is expected to hear from a group of independent experts on Thursday about whether or not the agency should authorize the vaccine for use in the United States.

More Like This
New Study Finds Brains Of Teens Who Lived Through The Pandemic Aged Faster
Is It Good For Babies To Be Exposed To Germs? It’s Complicated
Pelvic Pain During Pregnancy: What Causes It & How To Deal With It
This Year's White House Holiday Decor Features Wooden Cutouts Of The Biden Family's Pets