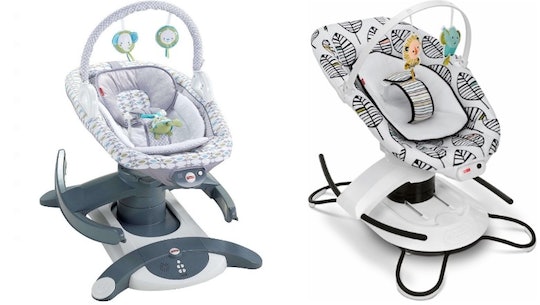 Two different soothing infant swings have been recalled due to risk of suffocation.

In the wake of at least four infant deaths, Fisher-Price has recalled two different baby soothing swings and urged any parent in possession of the swings to immediately stop using the product. Fisher-Price recalled its 4-in-1 Rock ‘n Glide Soothers as well as its 2-in-1 Soothe ‘n Play Gliders, noting infants placed unrestrained in the swings are at risk of suffocating.

According to a recall notice issued late last week by the U.S. Consumer Product Safety Commission, at least four infants have died between April 2019 and February 2020 while in Fisher-Price’s 4-in-1 Rock ‘n Glide Soother. These include a 2-year-old from Nevada, 4-month-old from Missouri, an 11-week old infant from Colorado, and a 2-month-old from Michigan. In every case, the infants were left lying unrestrained on their backs in the swing but later found on their stomachs. Infants in this position are at “risk of suffocation,” the recall notice read.

“These types of incidents are heart-breaking,” acting U.S. Consumer Product Safety Commission Chairman Robert Adler said in a statement released alongside the recall notice. “Loving parents put their babies in these products never expecting a tragedy. Inclined products, such as gliders, soothers, rockers, and swings are not safe for infant sleep, due to the risk of suffocation.”

“There is nothing more important to Fisher-Price than the safety of our products and the trust that families put in us,” Chuck Scothon, Fisher-Price’s general manager, said in a statement released alongside last week’s recall notice. “These incidents are indeed heart-breaking. We are committed to educating parents and caregivers on the safe use of all of our products, including the importance of following all warnings and instructions to ensure the health and safety of babies and children.”

According to the American Academy of Pediatrics, some 3,500 infants die every year from sleep related deaths in the United States alone. The organization recommends infants under the age of 1 be placed for sleep wholly on their backs and always on a firm sleep surface. Additionally, the American Academy of Pediatrics has explicitly advised parents against using infant swings such as the two recalled by Fisher-Price for sleeping babies.

Parents or caregivers who find they have one of the recalled swings are asked to immediately stop use of the swing and contact Fisher-Price online or by phone to obtain a refund.