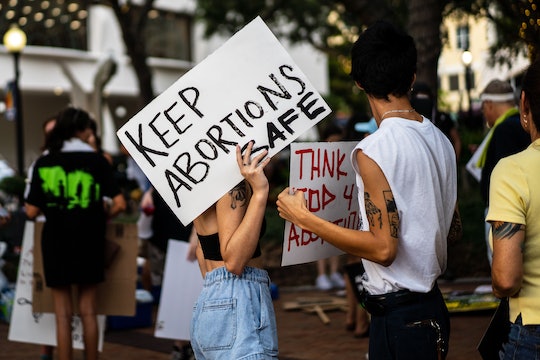 The ruling telling a 16-year-old, who is parentless, she wasn't "mature" enough to choose abortion came down through the Court of Appeal.

“Jane Doe 22-B” is 16 years old, pregnant, and parentless, and is seeking judicial bypass to obtain an abortion in the state of Florida. She is pursuing a GED via a program specifically designed to assist young women who have experienced trauma. She doesn’t have a job, and cannot depend on the father to assist her. She told a judge, according to court documents, that she is “not ready for the emotional, physical, or financial responsibility of raising a child” and “has valid concerns about her ability to raise a child.” Nevertheless, an appeals court in Florida recently upheld a ruling that Jane “had not established by clear and convincing evidence that she was sufficiently mature to decide whether to terminate her pregnancy.”

Jane’s initial request to get an abortion was first denied by Escambia County Circuit Judge Jessica Frydrychowicz and upheld by a three-judge appellate panel composed of Harvey Jay, Rachel Nordby, and Scott Makar, the last of whom dissented in part with the opinion even as he simultaneously partially concurred, and sheds some light on what he believes motivated Frydrychowicz’s ruling.

“The trial judge denied the petition but explicitly left open the availability of further proceedings,” Makar wrote. “Reading between the lines, it appears that the trial court wanted to give the minor, who was under extra stress due to a friend’s death, additional time to express a keener understanding of the consequences of terminating a pregnancy.”

He went on to stress that Jane, who was “inexplicably” not represented by a lawyer, has the right to further pursue her right to terminate her pregnancy, particularly in light of Jane’s report that her guardian supports her decision.

“Given the open-ended nature of the order reflecting the trial judge’s willingness to hear from the minor again — and the time pressures presented — I would remand the case to the trial court,” he wrote. “If the minor’s guardian consents to the minor’s termination of her pregnancy, all that is required is a written waiver from the guardian. ... Such a written waiver would be self-executing, meaning that the minor need not invoke the judicial bypass procedure at all.”

As of 2020, Florida is one of just six states that require minors obtain notarized parental notification and consent in order to have an abortion, though petitioning courts for “judicial bypass” is an option wherein a minor would not have to notify their parents/guardian. According to analysis from Politico, the vast majority of such judicial bypasses — approximately 91% — are granted. Jane lives with a relative, but has an appointed guardian from Florida’s child welfare authorities, whom Jane asserts supports her decision to terminate her pregnancy, but it would seem did not provide official written consent. (This is, quite possibly, the result of Jane’s guardian being of a more legal nature rather than someone she lives with and can go to easily for help.)

But even if Jane is able to pursue this course of action, time is of the essence. After 15 weeks, abortion is illegal in the state of Florida (though this law is currently being challenged in court), and surrounding states are even more inhospitable to abortion rights.

More Like This
Chrissy Teigen Says She’s Come To Understand She Had An Abortion To Save Her Life
GOP Sen. Lindsey Graham Wants To Create A Nationwide Abortion Ban At 15 Weeks
New Report Shows 80% Of Pregnancy-Related Deaths Are Preventable
Nebraska Judge Rules Two Mothers Cannot Appear On Their Sons' Birth Certificates