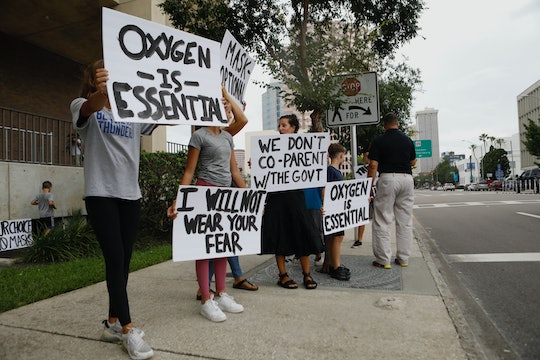 He’s been charged with child abuse without great bodily harm.

An anti-mask protest outside a Florida high school turned hostile on Wednesday when a father was arrested after allegedly getting physical with a student. Fort Lauderdale police said 50-year-old Dan Bauman was arrested in front of Fort Lauderdale High School and charged with child abuse without great bodily harm after reportedly pushing a student and twisting their arm “in aggressive manner.”

At the time of his arrest, Fort Lauderdale police said Bauman was accompanying his daughter, who has refused to wear a mask in adherence to school policy, as she attempted to enter Fort Lauderdale High School early Wednesday morning. But this wasn’t the first time Bauman had reportedly been on campus seeking to cause trouble.

In a probable cause affidavit obtained by Romper, a school resource officer assigned to Fort Lauderdale High noted Bauman was “known to cause disruption due to protesting the school board’s mask policy.” Additionally, CBS 4 Miami reported this was the fifth time Bauman and his daughter had attempted to enter the school, which requires all students, staff, and visitors to wear face coverings.

“Bauman accompanied his daughter as she attempted to enter the school gate without a mask,” Sgt. DeAnna Greenlaw told Romper in an email. “Bauman was videotaping other students with his phone and causing a disturbance at the gate. One of the students did not want to be videotaped.”

According to a probable cause affidavit filled out by one of the school’s resource officers, that masked student approached Bauman and told him, “I’ve had enough for four days” before attempting to grab the cellphone he was recording with. Bauman then “pushed the child by the shoulder and grabbed her hand and twist[ed] her arm in an aggressive manner,” the affidavit noted, adding security immediately intervened to pull Bauman off the student.

In a statement to Romper, Greenlaw said Bauman was immediately taken into custody, charged with one count of child abuse without great bodily harm, and transported to BSO Mail Jail.

While Broward County Public Schools, the district to which Fort Lauderdale High belongs, declined to comment on the incident that led to Bauman’s arrest, they stressed student safety was their number one priority in a statement shared by Local 10 News. “Safety is always our School District’s highest priority,” the statement read. “Regarding the issue of masks, the District’s focus remains on ensuring all students have a safe and healthy learning environment, especially now that they are back in the classrooms.”

Broward County Public Schools said officials at Fort Lauderdale High had “been attempting to work with” the Bauman family regarding the district’s mask mandate. The family was reportedly given information about allowed exceptions to the mandate as well as information on the Hope Scholarship, which allows students to transfer to another public school or an approved private school.

“The school and District want all students to be in class for face-to-face learning and to keep our schools open as Covid-19 positivity rates continue to climb,” Local 10 News reported Broward County Public Schools said. “They will continue to communicate with the family to resolve the issue.”