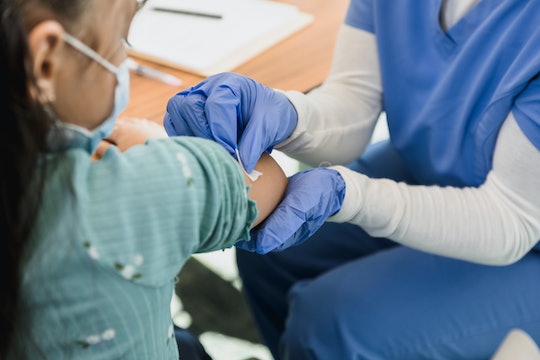 Florida Is Advising Parents To Not Vaccinate "Healthy Children" Against Covid

On March 7, Florida Gov. Ron DeSantis hosted a roundtable discussion of Covid-19 “failures.” Speakers were critical of Covid mitigation measures, including masking, lockdowns, and vaccines, some voicing common but unproven concerns about the safety of vaccines. Most of these arguments are nothing new, either to the discussion of the pandemic or to the politics of DeSantis, who has been critical of proactive Covid response from early in the pandemic. But it was Florida Surgeon General Joseph Ladapo’s announcement at the end of the roundtable that will perhaps have the most profound effect moving forward: “The Florida Department of Health is going to be the first state to officially recommend against the COVID-19 vaccines for healthy children.”

Though the official recommendation has not yet been made (Ladapo did not say when it would be), the move is contrary not only to the rest of the nation but guidelines issued by both the Centers for Disease Control and Prevention (CDC) and the American Academy of Pediatrics (AAP). This is not Ladapo’s first brush with controversy. His contrarian op-eds during the pandemic, as well as his past affiliation with the far-right political group “America’s Frontline Doctors” — an organization that promotes anti-vaccine conspiracy theories as well as the use of hydroxychloroquine, both of which Ladapo appears to endorse at least to some extent — caused concern among many when he was appointed by DeSantis last year. (He was sworn in Feb. 24 of this year.)

Dr. Lisa Gwynn, Florida chapter president of the AAP, said in a statement, “The COVID-19 vaccine is our best hope for ending the pandemic. The Surgeon General's comments today misrepresent the benefits of the vaccine, which has been proven to prevent serious illness, hospitalizations and long-term symptoms from COVID-19 in children and adolescents, including those who are otherwise healthy.”

“The evidence is clear,” she continued, “that when people are vaccinated, they are significantly less likely to get very sick and need hospital care. There is widespread consensus among medical and public health experts about the life-saving benefits of this vaccine.”

While children, relative to the general population, are less likely to suffer serious illness, hospitalization, or death as a result of Covid, nearly 1,000 children in the U.S. have died from the virus and over 115,000 have been hospitalized. A recent study from the CDC found that hospitalizations were four times higher during the omicron wave than delta, primarily among unvaccinated children (particularly in those too young to be vaccinated), highlighting the fact that a mutating virus can become riskier over time.

More Like This
It's Not Just Covid: Doctors On Why Everyone's Getting Sick Right Now
The FDA Has Approved A Covid Booster Shot For Children Ages 5 To 11
Spain Could Offer Up To 5 Days Of Menstrual Leave A Month & It'd Be A Game Changer
Two Young Children Have Been Hospitalized Because Their Formula Is Out Of Stock