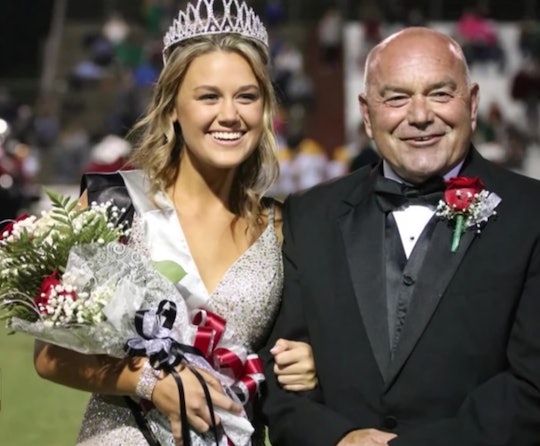 A Florida teen and her mother face multiple felony charges related to the alleged rigging of a homecoming queen election.

A Florida teen accused of rigging her high school’s homecoming queen election with the help of her mother will be charged as an adult and could see up to 16 years in prison if convicted. While Emily Rose Grover was 17 years old when she was arrested on multiple felony counts on March 15 alongside her mother Laura Rose Carroll, she turned 18 in April, enabling prosecutors to try her as an adult. Both Grover and Carroll have pleaded not guilty, according to their lawyer.

Grover was crowned Tate High School’s 2020 homecoming queen at a football game on Oct. 30. But within days of her crowning, school officials had reached out to the Florida Department of Law Enforcement after flagging hundreds of homecoming votes as suspicious, noting many originated from the same IP address.

In a press release issued at the time of Grover and Carroll’s arrest in March, the Florida Department of Law Enforcement said they’d been asked by the Escambia County School District to investigate reports of unauthorized access into hundreds of student accounts. That investigation found that both Grover and Carroll, who worked as an assistant principal at neighboring Bellview Elementary School, had used Carroll’s district credentials to access student accounts via an electronic student information system known as FOCUS.

“Agents uncovered evidence of unauthorized access to FOCUS linked to Carroll’s cell phone as well as computers associated with their residence, with a total of 246 votes cast for the Homecoming Court,” law enforcement officials said in their press release.

Investigators linked 122 votes to an IP address connected with Carroll and Grover’s home and another 124 votes to an IP address associated with Carroll’s cellphone. But the issue isn’t just that Grover and Carroll allegedly cast fraudulent votes, it’s that they accessed student accounts that contained personal information in order to cast those votes.

When confronted with the allegations by school board members, Carroll reportedly admitted that she had given Grover access to her FOCUS account in the past, the Washington Post reported an arrest warrant for the two said. In a written statement submitted to the school board, Grover claimed her mother had not known that she’d continued to access her FOCUS account, the newspaper reported.

According to Pensacola News Journal, Grover was expelled from Tate High School while Carroll was suspended from her role as assistant principal. Both have been charged with one count of offenses against users of computers, computer systems, computer networks, and electronic devices; one count unlawful use of a two-way communications device; one count criminal use of personally identifiable information; and one count conspiracy to commit these offenses, according to the Florida Department of Law Enforcement.

Randall Etheridge, Grover and Carroll’s attorney, told ABC News both women had pleaded not guilty. "These are good people,” Etheridge said. “They're not crazy as some people are trying to depict them. They're basically decent people."

If convicted Grover and Carroll could face a maximum of 16 years in prison.