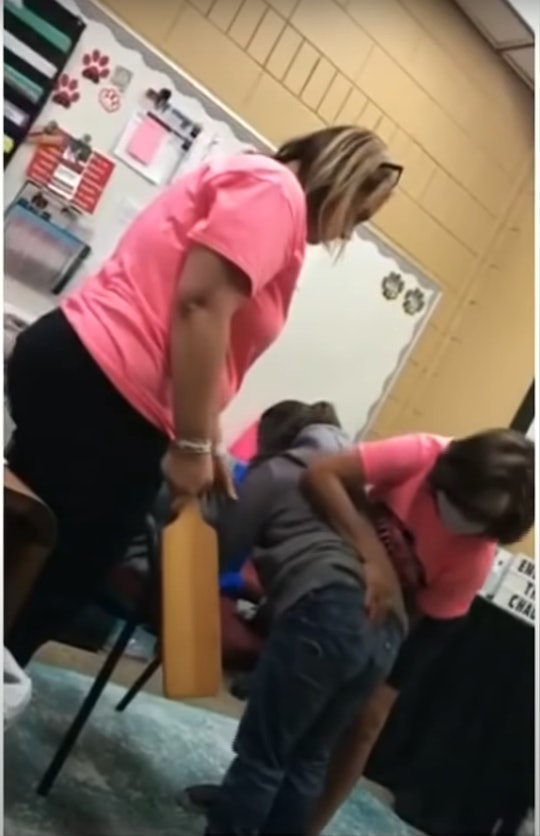 Police Are Investigating A Florida School Principal Who Paddled A Student

The child’s mother said the principal acted with “hatred” against her child, who was punished for damaging a computer.

After a 6-year-old girl in Florida allegedly scratched a computer screen at school, her mother was reportedly asked to come in to pay a fee for the damage. When she arrived, however, she was sent to the principal’s office, where Central Elementary School Principal Melissa Carter and school clerk Cecilia Shelf were were waiting with her daughter... and a paddle. Noticing a lack of security cameras, the mother took out her phone and began recording, sitting in “fear” and “shock,” as Clark struck her child with the paddle.

The disturbing video shows the crying girl standing up after the first swat. Carter commands her to put her hands back down on the desk as Shelf holds them in place before receiving two more blows. A longer version of the now-viral video, obtained by TMZ, shows a longer lecture following the physical punishment as the child hyperventilates.

As she leaves the room, Carter tells the mother, “Don’t let her keep acting like that, mom. You’re the mom.” The principal can then be heard laughing.

Additional footage obtained by TMZ, from apparently before the paddling, includes Carter calling the child a brat and saying, “You’d better be glad you’re not my daughter, because I’d spank your butt all the time for acting like that, and I’d wish you’d try to call the police on me.”

The mother reported that a language barrier prevented her from understanding what, exactly, was going before it happened, according to reporting from WINK News. Nevertheless, she knew she had to make other parents in the school aware of what was happening. “The hatred with which she hit my daughter, I mean it was a hatred,” she told Wink, her voice quavering with emotion. “I've never hit my daughter like she hit her. I have never hit her.” The child’s mother told WINK News that the girl suffered bruises and red marks as a result of the paddling, which were documented by a doctor.

Corporal punishment is legal in Florida, as well as 18 other states (despite the American Academy of Pediatrics urging its abolition). But the decision to allow or disallow spanking or paddling ultimately lies with individual county school districts. In Hendry County, where these events took place, corporal punishment is not allowed. But there is nothing in the Hendry County Student Handbook that addresses the issue, such as when paddling is to be used as punishment.

Speaking with CBS This Morning, Brent Probinsky, a lawyer working for the family, said that the principal, nor anyone at the school, was ever given permission to strike his client’s daughter. He added that the mother was caught off guard, confused, and “frozen with fear.” According to Probinsky, the child’s mother did not feel empowered to intervene because she and her husband are undocumented. “This is child abuse,” Probinsky CBS This Morning. “[Carter] should be charged with a crime and suffer those consequences.”

While no charges has been filed as of press time, the Clewinston Police Department has launched an investigation, as has the Florida Department of Children and Families, according to The New York Times. NBC News 2 has reported that Carter and Shelf have been placed on administrative leave from Central Elementary. Romper’s request for comment from local authorities was not immediately returned.

When asked if the school would like to comment, Hendry County Schools told Romper via email, “The situation is under investigation, at this time we have been advised to not give any statements.”