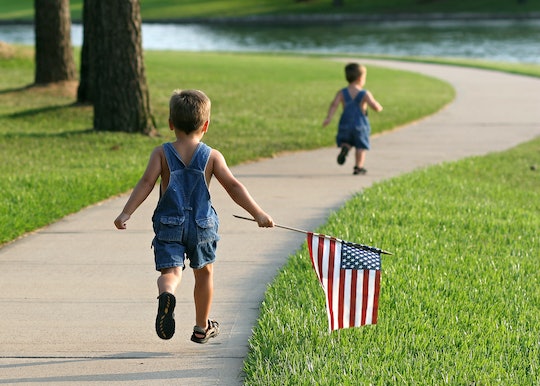 26 Perfectly Patriotic Quotes For The 4th Of July

Happy Birthday to the USA.

Get ready for picnics, cookouts, and loads of fireworks. These Fourth of July quotes will get you jazzed about celebrating this summertime holiday. Inspiring, insightful, and sometimes just funny, there’s no shortage of quotes relating to America’s Independence Day.

One of the best things about celebrating the Fourth of July is that there’s no incorrect way to mark the holiday. Want to take pics of the biggest fireworks celebration you can find to post on Insta later? Go ahead. Celebrating the fourth without fireworks is totally do-able, too, for those with small kids, skittish pets, or a totally understandable desire to avoid potential fire hazards at home. Feel like making adorable red, white, and blue desserts for your family? That’s amazing, because basically everyone loves a no-bake cheesecake loaded with berries. Whether you’re hosting a huge cookout party or hanging at home with some summery Netflix movies, there’s no wrong way to celebrate July Fourth. You have the freedom to celebrate (or even not celebrate) the holiday in any way you choose.

With that in mind, there are plenty of cool quotes to help you get into that red, white, and blue mood. Some are sweeping and patriotic, and others simply praise the joyful holiday filled with potato salad and explosions. Read on to see which quotes about the Fourth of July ring true with you.

Here’s a selection of quotes that celebrate the holiday itself, as well as the American spirit in general. Don’t miss the lyrics from Dolly Parton, AKA one of the best Americans ever.

It’s wonderful to live in a country that can laugh at itself. Here are some humorous takes on the uniquely American holiday.

Lastly, these stirring quotes celebrate the spirit of the Fourth of July and the country itself. (Hint: they’re perfect for posting as Insta captions, too.)

However you observe the holiday this year, the reading over some Fourth of July quotes are an inspiring way to celebrate the USA.