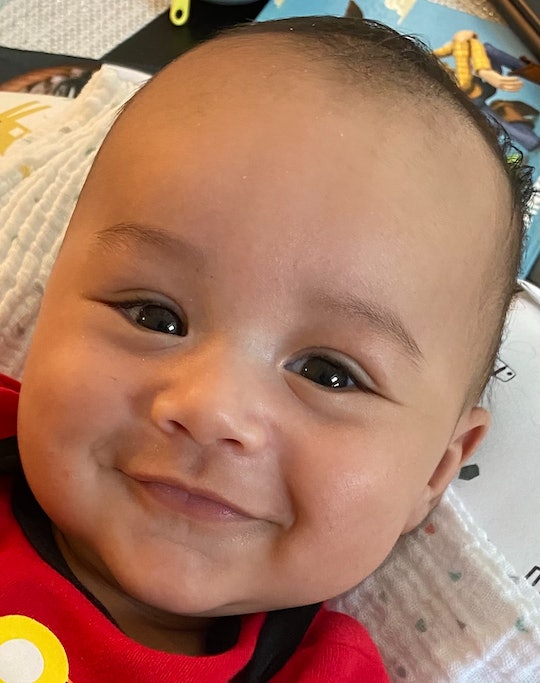 As Gerber’s new spokesbaby, Zane Kahin will star in the brand’s marketing campaigns and hold an honorary role on Gerber’s Executive Committee.

After sorting through numerous entries, Gerber has announced its 2021 spokesbaby and first-ever chief growing officer. Four-month-old Zane Kahin was selected as the new Gerber baby following the brand’s annual photo contest. As Gerber’s new spokesbaby, Zane will star in marketing campaigns and offer the brand guidance on what babies need to be strong, nourished, and thriving via an honorary role on Gerber’s Executive Committee.

“He’s in shock,” Erin joked of Zane, who appeared a bit confused by his parents’ celebratory cheers.

Gerber has hosted its annual search for a spokesbaby since 2010. This year, the brand sorted through more than 90,000 entries before selecting Zane, noting in a press release that Zane had “captivated the judging panel with his cheerful attitude, infectious giggles and playful smile that can light up any room.”

But it isn’t just Zane’s adorable looks and sunny personality that won Gerber’s judges over. According to Gerber, judges were also touched by the story of how Zane’s family came to be despite the potential challenges posed by a cancer diagnosis. “His family's story of perseverance and hope serves as a reminder of what unites all parents and drives everyone at Gerber: the promise to do anything for baby,” the brand said in its press release.

Zane’s mother Erin was diagnosed with breast cancer at 27 years old and underwent multiple treatments. “My doctors were unsure how the impact of chemotherapy, radiation, and a double mastectomy would impact my ability to have children,” Erin said in a statement shared by Gerber.

While Erin told TODAY she was prepared to undergo fertility treatments after meeting Michael and getting married, the couple was delighted to find they conceived naturally after a few months of trying. “We surprisingly conceived naturally and had a near-perfect pregnancy,” Erin said in a statement. “Our family continues to enjoy every moment and look at life with appreciation and a sense of humor."

Zane’s parents told TODAY they’d entered Gerber’s photo contest in an effort to answer every new parent’s most pressing question: Is my baby really cute? “When Zane was born, our nurse comes to us and tells us how cute he was, and then a couple of minutes later we heard her give the same response to another set of parents,” Michael said. “We were confused. We were like, ‘wait a minute, is Zane really cute or is the nurse giving a rehearsed response to all the parents?’ We had no idea. So, to settle this we entered him into the Gerber photo search.”

Turns out Zane truly is cute.