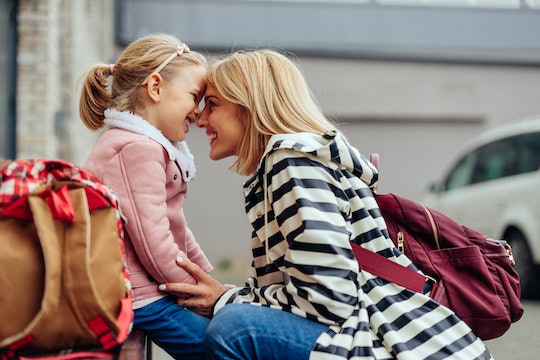 Good Moms Have Abortions — I’m One Of Them

When my daughter was 4 years old, I had an abortion. It was an act of love for all of us.

When my daughter was 4 years old, I had an abortion.

It was a wanted pregnancy. My husband and I both have siblings, and we wanted the same for Hannah. After my OB-GYN confirmed the pregnancy, I excitedly told my parents, sister, and closest friends. When I picked Hannah up from preschool that afternoon, I had to force myself not to tell her that she was going to be a big sister.

That night, my husband, Vince, and I began talking logistics: applying for a spot at Hannah’s old day care, how much paternity leave he’d have, when I should tell my freelance clients that I’d be taking time off. Then Vince mentioned that we’d need to get a new stroller, and my world collapsed.

“I can’t push a stroller,” I whispered, looking at my right wrist, which was atrophied and deformed after five operations to repair damaged cartilage and remove part of my ulnar bone. “It was hard enough when Hannah was a baby,” I said, beginning to shake as the enormity of what I had denied and what we had done hit me. “I love her so much but taking care of her, it’s made my pain so much worse,” I sobbed. “I don’t think — taking care of a baby, you have to use your hands so much... please don’t hate me — ”

“I don’t hate you,” Vince said, tears coming to his eyes, too. “I didn’t think about any of this, and I should have. I’m so sorry.” He hugged me and promised that we would figure out what to do.

Over the next few days, Vince and I met with my pain specialist and a high-risk pregnancy specialist. Both doctors agreed that the only way to manage the pain would be for me to take a low-dose oxycontin for at least the duration of my pregnancy, possibly longer. I couldn’t bear the harm that could do to a developing fetus, any more than I could accept the risk that I might develop an addiction. Eight days after that positive pregnancy test, I had an abortion.

Having an abortion was an act of love for all of us.

In the years before Hannah was born, I worked for an abortion rights organization and wrote a book about young reproductive justice advocates. I’ve talked to enough people about abortion in general and their abortions in particular to know how privileged my experience was. My family and friends supported me unconditionally, as did Vince. I had my abortion in Maryland, a liberal state that does not force providers to read patients a script containing falsities about abortion. My very good health insurance meant that I saw specialists quickly, although since that insurance was provided through Vince’s federal employer, it didn’t cover the cost of the procedure. But we could afford to pay out of pocket. I don’t have to fear personal or professional fallout for telling my story publicly and without using a pseudonym.

But for all the ways in which my particular story might not reflect the majority of women who seek abortion care (according to the Guttmacher Institute, 75% are “poor or low income” and 60% are in their 20s), there is one way in which I am squarely in the majority: 59% of women who have abortions already have a child. Yet some of the most pernicious stereotypes around abortion hold that women who terminate pregnancies don’t care about children, are selfish and only think of themselves, and somehow don’t grasp what being pregnant entails.

It's been five years since I had my abortion. My wrist has continued to deteriorate, but my daughter is thriving. The day news broke that the Supreme Court will almost certainly overturn Roe v. Wade, Vince and I talked to Hannah about abortion. We explained it as simply as possible, ready for the possibility that she would ask me if I’d ever had one. If she had asked, I would have said yes and told her my story. Instead, she was confused about why politicians would want to tell women they couldn’t make their own decisions about pregnancy. And that was the question I struggled to answer because I can’t explain that toxic mix of arrogance, entitlement, and complete lack of empathy to myself, let alone a fourth-grader.

I regret the circumstances that led to my abortion. I regret that Hannah won’t ever have a sibling. But I will never regret having an abortion.