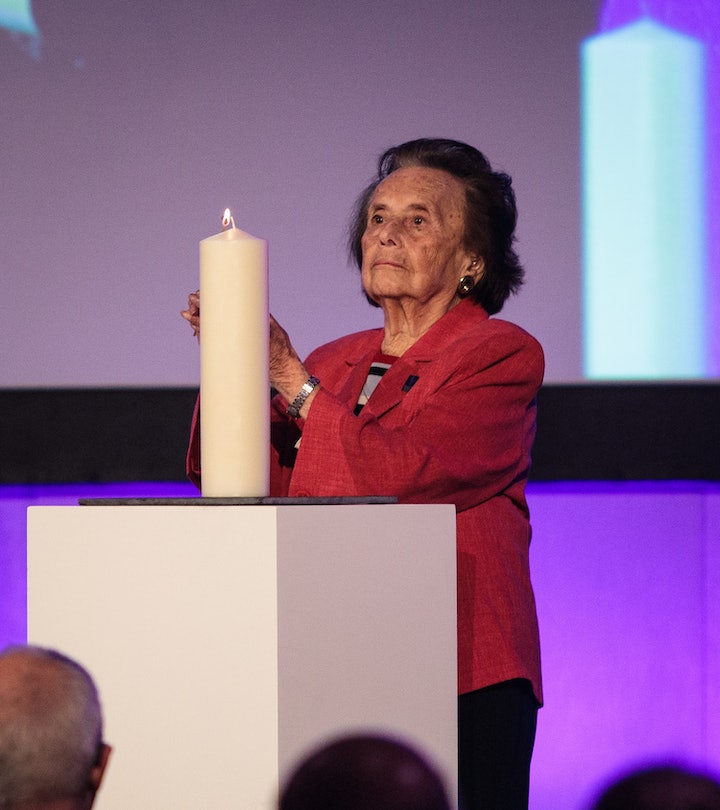 Grandma Who Survived The Holocaust & COVID Is A Symbol of Resilience

97-year-old Lily Ebert survived the horrors of Auschwitz as a young woman and is now recovering from COVID-19.

Dov Forman loves his great-grandma. He was happy to post a picture on his Twitter account on Jan. 21 of the 97-year-old smiling while on a walk near her London home. The image is particularly poignant in light of the fact that Ebert survived the Holocaust and now she's survived COVID-19.

More Like This
These Alternative Names For Stepmom Are Sweet & Meaningful
Ohioans Could Win $1 Million Or A College Scholarship If They Get Vaccinated
When Can Babysitters Get The COVID-19 Vaccine?
The Obamas’ New Family Rule? Get Vaccinated If You Want To Hang Out With Us

According to her biography via the Holocaust Memorial Day Trust, Ebert was only 14 years old when she was deported from her native Hungary to Auschwitz, the Nazi's most notorious death camp where more than a million people were murdered. Among the victims were Lily's mother Nina, brother Bela, and sister Berta. She and her two remaining sisters, Piri and Renee, spent about four months in Auschwitz before they were transported to an ammunition factory near Leipzig. They were liberated by American GIs in 1945. According to her bio, she moved to London with her husband and three children in the 1960s where she lives to this day.

In January 2021, according to NBC News, after having received her first dose of the COVID vaccine several weeks earlier, Ebert began to experience COVID symptoms. "I was very tired, very sleepy," she told the news outlet. "I really don't know what it is, but I felt very down. You could not do anything. It is terrible." But Ebert was able to recover at home (People reports that her family was concerned that she would have to go to the hospital) and on Jan. 21, 17-year-old Forman, joyfully shared a picture her first post-COVID walk.

"My 97-Year-old Great Grandma, Lily Ebert BEM - Auschwitz Survivor, has just recovered from Covid-19," Forman captioned the photo on Twitter. "Today she went on her first walk in a month after making a miraculous recovery. A fighter and survivor."

It's not the first time Forman made his great-grandma Twitter famous. In July 2020, according to People, he was instrumental in helping Ebert find the American soldier who gave her a little bit of hope at the end of the war by posting a picture of the soldier and the signed bank note he had given Ebert back in 1945.

"I joked with my great-grandma that I’d be able to find the soldier in 24 hours," he told Sky News last year. "And lo and behold, with the help of Twitter, we managed to find him in 24 hours, which is just amazing."

The soldier was Hyman Schulman, and while he himself unfortunately died in 2013 at the age of 91, according to The New York Times, Ebert has reportedly been in contact with his family, including five children.

Those who survived the Holocaust are all senior citizens now. In a recent op-ed for the New York Times, Toby Levy — a survivor and volunteer at the Museum of Jewish Hertiage–A Living Memorial to the Holocaust — wrote about the pain of having lost so much of her childhood to the Nazis and now a year of her old age to the coronavirus pandemic. "I lost my childhood, I never had my teenage years," she wrote. "And now, in my old age, this is shortening my life by a year. I don’t have that many years left. The way we have lived this year means I have lost many opportunities to lecture, to tell more people my story, to let them see me and know the Holocaust happened to a real person, who stands in front of them today. It’s important."

Many survivors and educators are concerned what will happen after the horrors of the camps are no longer within living memory. Indeed, a 2020 survey from the Conference of Jewish Material Claims Against Germany found that 49% of respondents said they had seen Holocaust denial or distortion content on social media.

Fortunately, survivors like Ebert have shared their story, determined to keep the memory of the Holocaust — and its victims — alive. And with the help of social-media savvy grandsons, those precious stories have the ability to reach more people than ever before.