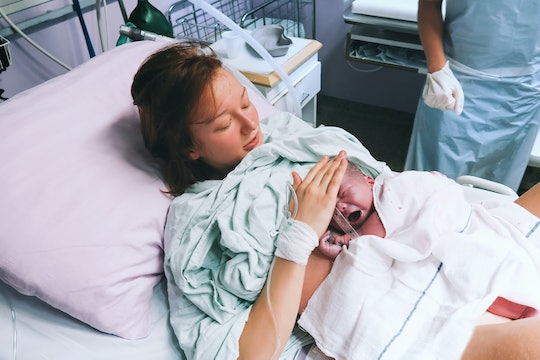 Here's How Long It Takes For Your Uterus To Go Back To Normal After Giving Birth, According To Experts

Most mothers have those occasional (or more frequent) thoughts about how long their body is going to take to get back to its pre-pregnancy self. Growing a baby is a big project for any body, and while it is miraculous and incredible, it also has to happen in your body, which can be a little uncomfortable (to say the least). But while most of us wonder when our pre-baby bodies are going to come back, what about the organs involved? How long does it take for your uterus to go back to normal after giving birth? Thankfully, as with almost everything parenting related, nothing lasts forever: including the size of the organ that houses your baby for 40 weeks (more or less).

While I've never been pregnant (I am, however, an adoptive mom to two incredible children) I've thought a lot about being pregnant and often wondered about what my body would look like after giving birth. Truth be told, though, I've never thought about what my uterus would do after playing such a big role in growing, housing, and expelling a baby. As it turns out, your uterus knows just what to do after giving birth (as does the rest of your organs) and gets right down to business, shrinking itself up as soon as you have a baby.

According to BabyCenter, "Within minutes of your baby's birth, contractions cause your uterus to shrink, its crisscrossed fibers tightening just like they did during labor. These contractions also help the placenta detach from the uterine wall." A week after giving birth, BabyCenter says your uterus will shrink to half the weight of what it was when you gave birth, down to about a pound in weight. Two weeks after giving birth, your uterus will have shrunk to about 11 ounces, and after four weeks it will be just about the same size it was before you gave birth. So, in the end, it will probably take a total of four weeks for your postpartum uterus to "get back to normal."

For reference, The Bump gives soon-to-be and/or new moms an idea as to just how large the uterus expands during pregnancy. Guys, it's incredible:

"It starts out about the size of your fist and hangs out deep in your pelvis. By about 18-20 weeks it will have grown out and up — reaching about as high as your belly button. From then on, it will measure about as many centimeters as the week you are in your pregnancy (so at 38 weeks, it will likely measure about 38 centimeters)."

So a woman's uterus shrinking back down to pre-pregnancy size is no small task, my friends. Just consider this example number 223,553,119 of how miraculous and badass the human body truly is.

Just like pregnancy, postpartum life is all about change, adjustment, and managing expectations. For the most part — and barring any complications — your body will know what to do in order to recover from pregnancy, labor, and delivery. Of course, if you ever have any lingering questions or odd feelings, it's best to contact your physician. After all, that's what they're there for.

More Like This
What To Know About Your C-Section Shelf
Pinterest Predicts Their Top 2023 Trends In Parenting, Beauty, Fashion, Home, & More
Yes, It’s Possible To Get Pregnant If You Have An IUD
14 Free, Printable Birth Plan Templates For Every Kind Of Delivery