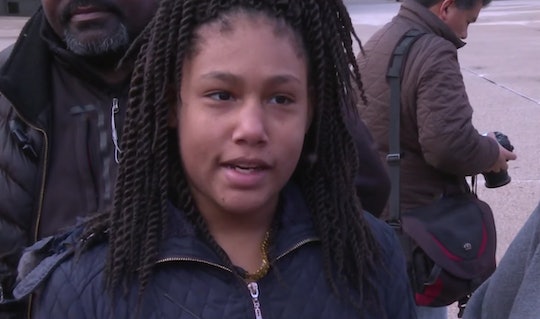 The Michigan girl, handcuffed by police when she was just 11, helped establish a policy regarding how law enforcement should interact with children.

Nearly three years after police handcuffed her outside her home, sparking national outrage over law enforcement's mistreatment of Black youth, Honestie Hodges died of COVID-19 complications, according to a statement released by her family. The 14-year-old girl passed away Sunday, roughly two weeks after being diagnosed with COVID-19.

"It is with an extremely heavy heart that I have to tell all of you that my beautiful, sassy, smart loving Granddaughter has gone home to be with Jesus," Alisa Niemeyer, Hodges' grandmother, wrote in an update to a GoFundMe Campaign originally set up to help the family cover the cost of Honestie's hospital bills.

According to Niemeyer, Honestie tested positive for COVID-19 on Nov. 9 and was rushed to Helen Devos Children’s Hospital in Grand Rapids, Michigan, that night. On Nov. 13, the teen was placed on a ventilator. She passed away roughly nine days later.

In the wake of Honestie's tragic death, leaders in the Black community have pleaded with those who expressed outrage over the young girl's mistreatment by police in 2017 to honor her memory now by taking the ongoing coronavirus pandemic seriously. “All of the folks who showed up and expressed interest when Honestie was held at gunpoint, this is an opportunity to really honor her life fully,” Greater Grand Rapids NAACP branch President Cle Jackson said Tuesday, as Michigan Live reported. "Honor her life by doing what is necessary, what is needed, and that is limit your movement, limit your movement. We have to.”

Honestie's name first became known nationwide in December 2017, when she was handcuffed by police at just 11 years old. According to The New York Times, bodycam footage from the incident showed police approach Honestie, her mother, and a third family member with their guns drawn as the trio stepped out of the back door of Honestie's home. Despite being told by her mother that she was only 11, police ordered Honestie to walk backward towards them with her hands up before grabbing her and handcuffing her.

In bodycam footage from the incident seen by USA Today, Honestie can be heard crying and pleading with police while an officer tells her, "You're fine. You're not going to jail or anything." Police told the news outlet Honestie was handcuffed for two minutes before being detained for an additional 10 minutes in a police car.

At the time, Michigan Live reported police had said they were looking for Honestie's 42-year-old aunt who was alleged to have some connection to a stabbing that took place earlier in the day. Honestie's mother, however, maintained officers had traumatized her daughter, who had trouble sleeping following the incident and required counseling.

While none of the officers involved in the incident ever faced disciplinary action — according to Michigan Radio, an internal investigation found they did not violate department policy in handcuffing a child — the incident sparked national debate about how police treat children of color and led the Grand Rapids Police Department to establish the "Honestie Policy," a series of rules regarding how they interact with children at potential crime scenes.