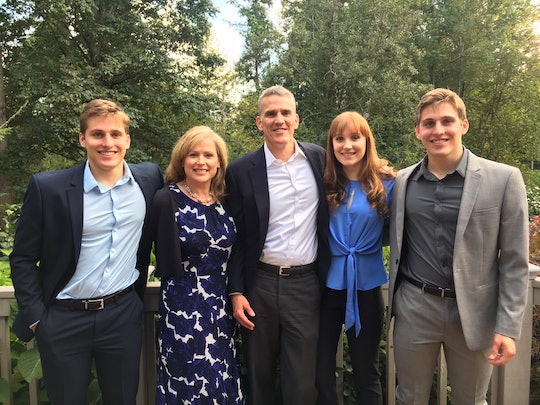 The Gregg family. Image courtesy of The Northwestern Mutual Foundation.

In December of 2014, Adam Gregg began to feel ill. The affliction — what he assumed was a stomach bug — would pain him periodically, going away and coming back in spurts. In June of 2015, five months after his initial symptoms, his doctors conducted an ultrasound, at the persistence of his mother Ardeth. Much to their dismay, the doctors found a mass, which they later diagnosed as Fibrolamellar Hepatocellular Carcinoma (FLC), an ultra-rare form of liver cancer.

The news of the diagnosis sent a jolt through Adam’s immediate family; Ardeth, his father Joe, his older sister Maria, and his twin brother Conrad all began to shoulder the burden.

“It's just like an anvil coming down on your life — everything changes in an instant,” Ardeth says of the experience. Living outside of Seattle, the family had prioritized exercise and education, often going on hikes through the mountains of Washington when not giving their all to their scholastic pursuits. Yet suddenly, their lives had a new focus.

“Your life is moving very fast, and you need to make decisions in a short amount of time, and they are major decisions,” Ardeth says. She would leave her job to take care of Adam and the family, and they stayed with their grandmother to ensure life could carry on as normally as possible for them while Adam underwent surgery at Seattle Children’s Hospital. At the hospital, Adam would be subjected to an intense surgery, where they removed a large tumor and more than half of his liver, although that was just the beginning of the treatment and continued surveillance needed for his recovery.

While Adam underwent extensive medical procedures, his family unit struggled to cope. “As a sibling, you want to be involved, and you're just as emotionally invested, but it's hard," Maria says. "You can't be in the room when things are happening and your parents don't stop being your parents, so they still tried to protect us and filter any information that got to us."

Yet even in times of great duress, Adam’s siblings stepped up when he needed them the most. “Conrad and Maria made the whole process of having scans and appointments during school so much easier,” Adam says. “Conrad would go to my classes to pick up stuff for me or ask teachers, ‘What did you do in class?' so he could summarize it for me. They just made it so much easier.” Thanks to his siblings, Adam never missed a single homework assignment or performed poorly on a test while undergoing treatment.

While this story is unique to the Greggs, the issues at hand are the same ones felt by any family who has a child affected by cancer. When cancer strikes a family, its reverberations are felt throughout each and every one of their lives. While the child who has cancer is dealing with the disease, their siblings are often subject to a more invisible type of affliction; enduring intense stress, worry, and a lack of concentration on the things that are happening in their own lives. Thankfully, those often unheralded heroes are now being recognized and rewarded, credit to The Northwestern Mutual Foundation.

In 2012, The Northwestern Mutual Foundation launched its Childhood Cancer Program to find cures, provide family and patient support, and aid those who struggle with the long-term effects of treatment. Thus far, the program has contributed more than $30 million with the help of its employees and financial advisors nationwide, funding more than 400,000 hours of research, helping children and families to move beyond the fears of cancer and find happiness.

The Northwestern Mutual Foundation also has a specific scholarship program to help children affected by cancer and their siblings to pursue their higher education, because they believe these students deserve every opportunity to continue their education and pursue their dreams. While many families are impacted by the costs of treatment and loss of income, college tuition can add yet another daunting monetary hurdle for those who may already be struggling financially. Northwestern Mutual’s scholarship program aims to help offset some of those costs and mitigate the financial impact of cancer, helping families of children affected by cancer during a difficult time. To date, Northwestern Mutual has supported 113 scholars and contributed more than $900,000 through its Childhood Cancer Scholarship Program.

With gratefulness and luck in their corner, Adam, Conrad , and Maria were all awarded Northwestern Mutual’s scholarship earlier this year.

For Joe, like many others, the scholarship meant not having to worry as much about the family's financial situation. “We're making small and large decisions about what to do with financial resources, what to buy or not buy, what sort of debt to go into,” Joe says. “The Northwestern Mutual scholarship is a very significant contribution, which at the very least reduces stress and also gives us some flexibility in other parts of our lives to make other decisions.”

Currently, Adam, Conrad, and Maria are all enrolled in college with support from The Northwestern Mutual Foundation. For Adam, the support of organizations like Northwestern Mutual provided him hope that there might someday be a cure. “It gives you some hope,” Adam says. “You have some sense of security that there are people working to provide treatments and cures for what you're experiencing, because cancer is just as much a mental battle as it is a physical battle.”

For Conrad and Maria, the scholarship program provided recognition for the often overlooked toll the disease can have on the whole family. "It was just such a validating experience even to know that they offered a sibling scholarship," Maria says. "It definitely helped us to keep wanting to stay on track and to continue to devote ourselves to our studies."

Conrad agrees that Northwestern Mutual's scholarship program – which is currently the only cancer-related scholarship program that honors the challenges that siblings of patients endure – gave him the support he needed to continue to strive academically during an extenuating circumstance. “It recognizes the struggle that everybody goes through,” Conrad says. “When someone outside your family recognizes your family for the struggle they went through, it's really uplifting, it's really motivating.”

In true twin fashion, Adam and Conrad are both currently studying history and economics in their sophomore year of college, with Maria finishing up a double major in political science and sociology (as well as a minor in history). While their high school memories might bring up a difficult period for their family, things have started to look up thanks to the impact of the scholarship program and their strong family bond.

“When you go through something like this together, it really strengthens that underlying understanding that we are all in this together,” Maria says, “and that we are a family and — although it sounds cliché — that we can do it and get through it.”

This article is sponsored by The Northwestern Mutual Foundation.

More Like This
The Covid Vaccine For Kids Under 5 Has Been Sent To The FDA For Review
Elmo Talks About Getting His Covid Vaccine In A Cute New Video
You Can Schedule Your Kid’s Covid Vaccine Appointment At Walmart
Should Parents Consider Delaying Covid Vaccines Until Closer To School Starting?

This article was originally published on November 30, 2020