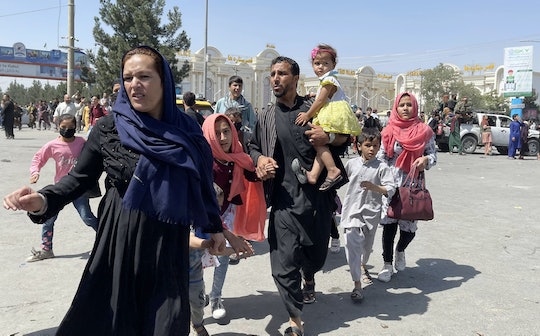 As thousands of Afghan families seek to escape Taliban rule following the insurgents’ takeover of Kabul, humanitarian aid organizations have ramped up efforts to secure support.

Humanitarian aid organizations around the world are scrambling to support Afghan women, children, and families following the Taliban’s quick seizure of Kabul — and they need help. Whether it’s through monetary donations, volunteer work, or even by gifting airline points, here’s how you can help Afghan families as they attempt to navigate the grim crisis currently unfolding in Afghanistan.

Since January, more than 500,000 Afghans have been internally displaced from their homes due to conflict within the country, according to the United Nations High Commissioner for Refugees (UNHCR). Until recently, the UNHCR believed only a few civilians had fled the country although more are expected to follow now that the Taliban has unofficially taken full control of the country. On Monday, thousands swarmed Kabul’s international airport in a desperate attempt to flee the country by boarding any of the few planes scheduled to fly out that day.

International humanitarian aid organizations are now focused on providing vital services, support, and protection to Afghans still trapped inside the country while various refugee resettlement agencies work to aid Afghan refugees abroad. Here’s how you can assist in those efforts right now.

Perhaps one of the easiest ways to aid Afghan families right now is through monetary donations to vetted organizations working to support Afghans, including those who have been internally displaced or are looking to seek refuge abroad.

As thousands of Afghans are now seeking to flee the country, many don’t have the financial means to purchase a plane ticket out. Organizations like Miles4Migrants, however, help refugees and asylum seekers afford flights to their resettlement country through generous donations of frequent flyer miles and airline points.

While Miles4Migrants accepts miles and points from almost all loyalty programs, the organization has noted that the most needed miles and points are often those from United Airlines, Alaska Airlines, Southwest Airlines, Flying Blue (or KLM and Air France), Air Canada, American Express Membership Reward Points, Chase Ultimate Rewards, and Capital One Rewards.

Airline Miles and points can be donated to Miles4Migrants through its website along with travel vouchers from certain airlines and cash donations.

Organizations that assist refugees or holders of Special Immigrant Visas resettle in the United States and Canada have issued urgent calls for volunteers and donations as they prepare to welcome those fleeing the Taliban.

In the Washington, D.C. area, Lutheran Social Service of the National Capital Area is providing support to the hundreds of Afghans already evacuated to or expected to be evacuated to Virginia and Maryland. They’re currently seeking monetary donations to cover transportation and temporary housing costs for Afghan refugees as well as assistance in providing temporary housing for newly arrived refugees and organized home setups. The organization also has multiple “wish lists” for incoming Afghan refugees, including one for expectant mothers, that list much-needed items and supplies you can donate.

Lutheran Immigration and Refugee Service has also issued a call for volunteers willing to assist Afghan refugee families being resettled in Seattle, Washington, and Houston and Fort Worth, Texas, with things like airport pickups, apartment setup, and meal assistance.

In California, Jewish Family and Community Services is gearing up to welcome six large Afghan families to the San Francisco Bay Area with plans to resettle more than 60 additional Afghan refugees by the end of the month. They’ve called for volunteers willing to assist with airport pickups and other resettlement assistance including helping families sign up for social services and register children for school. The organization also accepts donations of items purchased off its Amazon Wish List, which are given directly to resettled refugees and include things like diapers, basic cleaning supplies, and small kitchen appliances.

Humanitarian aid organizations have also urged those interested in aiding Afghan families to advocate for them at home. The International Rescue Committee has asked Americans to email the White House to demand President Joe Biden’s administration take immediate action to safely evacuate those in need of protection (such as Afghans who worked with or assisted U.S. personnel while also assisting the millions of Afghans in need of urgent humanitarian aid.

Voters can also lean on the White House to listen to the group of 46 bipartisan senators demanding Biden not only expand its U.S. Refugee Admissions Program to take on more Afghan refugees but also create a specific category for at-risk Afghan women such as government or political figures, journalists, activists, and security forces. Information on how to contact the White House can be found on its website.