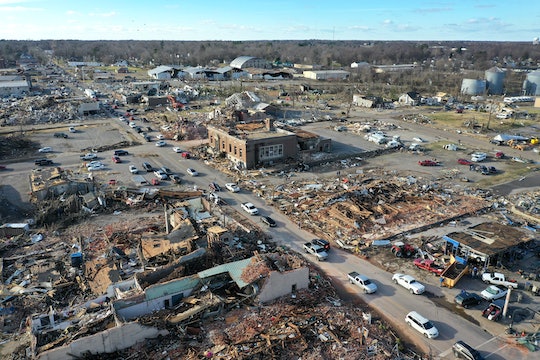 How To Help Families Who Lost Everything In Devastating Tornadoes

Real ways to help right now no matter where you live or how much you have to give.

A weekend of violent tornadoes has killed at least 90 people across more than six states and displaced thousands of families from their homes. Dozens of tornadoes are reported to have ripped through multiple Midwestern and Southern states late Friday and early Saturday, with at least one reportedly traveling more than 220 miles on the ground to flatten almost the entire town of Mayfield, Kentucky. Thankfully, there are a number of ways to help families in Kentucky and beyond who have been impacted by devastating tornadoes no matter where you are or how much you have to give.

Some 50 tornadoes ravaged Arkansas, Illinois, Indiana, Kentucky, Mississippi, Missouri, Ohio, and Tennessee over the weekend, CNN reported data from the Storm Prediction Center showed. At least 90 people have died as a result of the devastating and dangerous weather, The New York Times reported. At least 80 of those deaths occurred in Kentucky, where damage from the tornadoes was particularly devastating.

According to the Kentucky Division of Emergency Management one tornado, in particular, is believed to have originated in Arkansas but traveled 220 miles across Kentucky after making its landfall. If confirmed by the National Weather Service, it will establish a new record for the longest continuous distance a tornado has ever traveled on the ground, The Lexington Herald-Leader has reported.

As families in Kentucky and other affected states grapple with the devastating aftermath of the tornadoes’ destruction, individuals and organizations around the country have mobilized to aid relief efforts. Below are just some of the many ways you can help impacted families following this weekend’s tornado outbreak.

Kentucky Gov. Andy Beshear has established the Team Western Kentucky Tornado Relief Fund to help those impacted by Saturday’s severe weather event. Donations to the fund are tax-deductible and can be made either online or through a mailed check.

Donations to Mercy Chefs, an organization that serves meals in the aftermath of natural disasters, will help the faith-based nonprofit provide meals to Mayfield residents. The group will be distributing free, hot meals from His House Ministries in Mayfield twice daily, according to their Facebook page. Monetary donations can be made to Mercy Chefs to help cover the cost of groceries and other supplies via their website while those looking to volunteer their time with Mercy Chefs will also find information on their website about how to begin that process.

Aid A Former Mayfield Kid In Helping His Hometown

Wisconsin Badgers player Chris Vogt may be calling the Badger state home now, but this basketball star actually has close ties to the Bluegrass state. In fact, Vogt grew up in Mayfield, Kentucky, one of the towns most heavily impacted by Saturday’s tornadoes. To help his hometown recover, Vogt has launched a GoFundMe campaign for relief efforts in Mayfield.

“I was speechless when I saw the pictures and videos of the damage,” Vogt wrote about his fundraiser. “I want to be able to help those that were affected in any way possible. Every little bit you are able to donate helps.”

Global Empowerment Mission, a nonprofit disaster relief organization based in Miami, Florida, has partnered with Racing Louisville and the Louisville City Football Club to send trucks of needed supplies to Western Kentucky. The nonprofit has already dispatched one semi-truck stocked full of much-needed supplies to affected communities and plans to send at least two others with a minimum of $425,000 worth of supplies. Donations to Global Empowerment Mission’s Kentucky Tornadoes Fund will help stock trucks with supplies.

Support Students In Mayfield Who Lost Everything

The Kentucky Counseling Center is currently collecting donations for children and families in Mayfield. The network of mental health care professionals plans to distribute the donations to Graves County school counselors and social workers who will then put the money where it is needed most.

“We will work hard to provide timely updates on where and when donations are distributed,” The Kentucky Counseling Center has said. “We are not a non-profit organization, but we’re doing what we can to help this community as fast as possible. All donations, no matter how small are appreciated.”

Give To The American Red Cross

The American Red Cross and their partners have activated in Western Kentucky to help provide shelter, food, relief supplies, and emotional support to impacted residents throughout the region. At least eight emergency shelters have been opened in Kentucky with additional shelters opened in Tennessee. “Right now, the need is great,” Steve Cunanan, regional executive of the Kentucky Red Cross, said in a recent press release. “I’ve seen firsthand that there has been so much devastation. People lost loved ones, their homes, everything is just gone for them. We’re moving as quickly as we can to get much-needed disaster relief and blood products to area hospitals in these communities that are unrecognizable now.”

Those looking to help are encouraged to make a monetary donation to the American Red Cross’ Disaster Relief Fund and to give blood to ensure the nation’s blood supply is well stocked for those who may need it.

Aspire Appalachia, a volunteer-powered nonprofit group based in Eastern Kentucky, is working to help its neighbors to the west. Along with raising funds to aid tornado relief efforts centered around humans, the nonprofit is also raising money to help local animal shelters handle the influx of strays they traditionally receive following natural disasters like Saturday’s tornado outbreak. Donations to Aspire Appalachia’s Fundraiser for Animals Impacted in Western Kentucky can be made via Facebook.

The nonprofit CARE is working with local community-based partners in Louisville to quickly get food, water, and emergency cash vouchers to affected Kentucky families. “Food, water, and shelter are the most immediate needs for Kentucky families whose homes were destroyed and lived uprooted after deadly tornadoes this weekend,” the organization has said on its website.

According to CARE, a donation of $100 can provide food and water to families who need it while a $250 donation can provide a family with an emergency cash voucher. Donations to CARE’s Kentucky Tornado Response Fund can be made directly through the nonprofit’s website.

The New Madrid County Family Resource Center, which operates a diaper bank serving families in an area close to the Missouri-Kentucky border, is already hard at work providing diapers, wipes, and period or incontinence supplies to families in Western Kentucky. On Sunday, staff from the diaper bank rushed to transport supplies to Mayfield to ensure access to clean, dry diapers and other products. The diaper bank is currently looking to gather more supplies, including diapers of various sizes, wipes, diaper rash cream, and period and incontinence products — all of which can be purchased directly off their Amazon Wish List — to take to families impacted by recent tornadoes. Monetary donations can also be made to the New Madrid County Family Resource Center via PayPal using their username @nmcfrc.

Donate Directly To Those In Need In KY, TN, AR, IL, MO,

Of course, while parts of Kentucky same devastating amounts of damage, the Bluegrass state is not the only one to have been ravaged by tornadoes over the weekend. Tennessee, Arkansas, Illinois, Missouri, and Mississippi were also struck by violent tornadoes. A list of verified fundraisers launched for people affected by tornadoes in the Midwest and Southern states has been put together by GoFundMe. Many campaigns have been started by local residents in each state seeking help getting back on their feet following the weekend’s devastating weather.