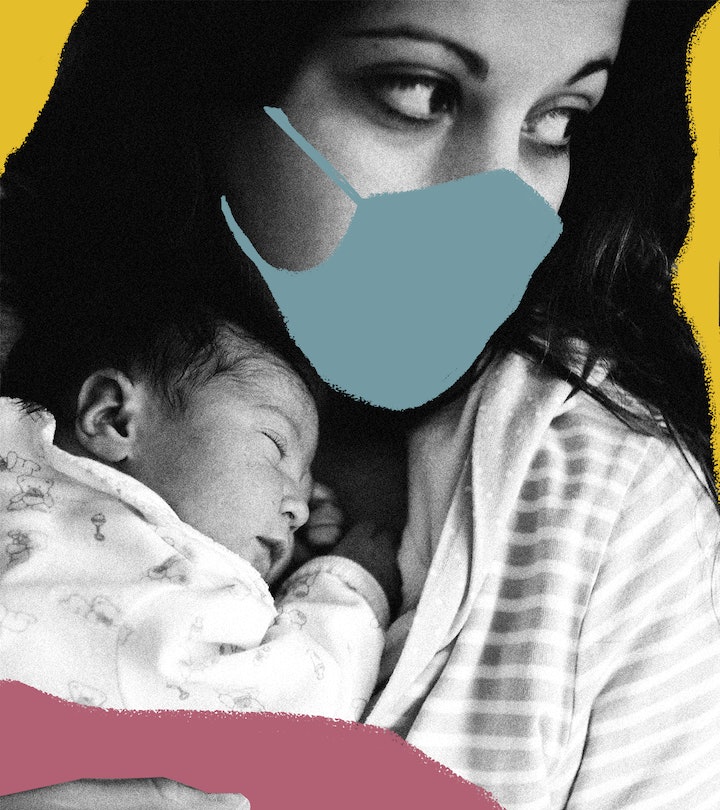 I Gave Birth In A Face Mask, Without My Family – Here’s How I Handled It

Cedasha Michelle delivered her first baby on May 4, when Michigan had full social distancing guidelines in place. At the time, her partner was not allowed in certain parts of the hospital and delivering mothers were required to wear face masks. After birth, their families were not able to meet or hold the baby. Still, in Cedasha’s telling, there were upsides to going through birth alone as a couple. She offers advice for mothers whose birth plans have been upended by the pandemic. As told to Romper.

Once I found the world was going to be shut down, I just kind of went into action mode and looked into what is available. Can I still do a hospital tour? No. OK. I can't do that. So let me talk to the coordinator and get my questions answered. What can I bring to the hospital? Can my partner come? What's available to me? What resources are available to me? So from that, I just think mainly when everything just started to unfold, it just made me think of plan B. What's my plan B for everything? For a Lamaze class, for maternity pictures, for a baby shower. I just had to think about what I can still do to have my moment. Make sure that you have everything together in your hospital bag. I ordered a lot of my own things, like my own gown. I brought my own towel and washcloths and just different things like that to make me feel more comfortable. I couldn't bring my own pillow. I couldn't bring my own blanket. If you can ask every question, ask it.

I was slightly nervous, but I knew that there was really nothing that I could do. Everything was not in my control, so I just said a prayer and went for it. I didn't have a birthing plan. I just went in saying, OK, it's going to be how it's going to be. As long as mom and baby are safe, that's really the only thing that I'm concerned about. But mentally it was definitely difficult knowing that our immediate families can't come and be a part of our moment.

It actually ended up not being so bad. I was due on May 17 to begin with, and I ended up having him two weeks early. Because my pregnancy was so tumultuous, I felt like he was coming early, I felt like he was ready also. On May 4, I woke up and I felt extremely different, something that I hadn't quite felt throughout the entire pregnancy. And I knew that today was the day. So around 3:50 a.m., I used the restroom and then I discovered the mucus plug and my contractions started to come in. I called my OB-GYN and she said, "Well, it sounds like you're going into labor. Let's just have you go to the hospital just in case. Even if it's a false alarm, it's better to be safe than sorry."

So we went into the hospital, checked in exactly around 6:30 a.m. into triage. It was silent in there. There was actually no one in [there] but us. They did take our temperature and then they asked us a series of questions, if we had any cold-like symptoms, if we traveled recently. And then from there went up to triage. Emotionally, it was really hard because my boyfriend had to go downstairs. He couldn't be in triage with me at all. So I had to go through triage by myself. I didn't know what they were going to do in triage until they started to explain it. And to just be there alone was tough. It was challenging because you're going through your contractions, you're already in pain, they're doing the tests, and then you have to do all these other things.

All of the nurses of course and doctors had on their masks and gloves. I was mainly listening to voices.

It was a ghost town in there. They did all their testing, they monitored my heartbeat, the baby's heartbeat, and did the cervical tests. And once they found out I was six centimeters, they said, "OK, we're going to keep you." [My partner] came upstairs and then they moved us to where I was going to deliver our son. I initially remember being wheeled into that room, I looked at the baby warmer and I said, "Wow, this is really happening. This is real." And then of course my nerves started to get me a little bit because not only was I in pain, but I'm nervous thinking about what's to come.

My nurses were fantastic. The doctors were fantastic. Everyone was really nice. Everyone was really accommodating and sweet. I think we were the second family on that floor delivering a baby. I couldn't get an epidural or any type of IV meds, because by the time I asked for it or by the time they ran tests to see if I could get it because I had nosebleeds during my pregnancy, it was time for me to deliver. So I had the baby naturally, unmedicated. And it definitely hurt, but it wasn't so bad because I had a burst of energy after I had him. I was up, I was excited.

I did have my mask and gloves on when I delivered him. It wasn't over my nose, but it was over my mouth. And all of the nurses of course and doctors had on their masks and gloves. I was mainly listening to voices. My eyes were closed quite a bit because my contractions were awful. I was grateful that my partner and OB-GYN were there because they were familiar to me.

I would have had my parents there, I would have had his parents there, and more than likely both of our sisters would have been there also. Even if they were just in the waiting room, we would have had a nice amount of our immediate family there. So that was challenging, but the blessing and the upside to that is even though they weren't there, we know they were there in spirit. But it was nice that we only focused on each other and our family. We didn't have any distractions.

I would tell the women [preparing to deliver] especially during this time, make sure you have everything you can do done before you have your baby.

Before Michigan listed their [change to distancing rules] — now they're allowing 10 or more people together, consciously, if you are comfortable with that. We're still kind of skeptical [about meeting with family] only because he's so young and we don't want anything to possibly harm him by any means. Somebody could be asymptomatic, so as of now they see him through the screen door. Or if they come in, they have on their mask and gloves and things along those lines. But it's just not the same as far as family being able to come over and [hold him]. That really breaks my mom's heart, because I know that if things were normal, she would've stayed with us at least for the first week, prepared all the meals and just do as much as possible. She's still doing everything that she possibly can do now. Both my mom and dad are, and they're fantastic. His parents are great too, bringing us food, cleaning, and gardening. They're doing as much as they physically can at a distance. It just sucks that we can't be closer together. None of us know when we will be able to, but I'm just looking forward to that day, to where we can hug each other again and be in close proximity.

As far as me and a postpartum check you get your first checkup at the hospital the two days that you're there. If you have a vaginal birth with no problems, they check you the first and the second day after birth. And then after that you have your physical followup in six weeks. The OB-GYN called around my third week just to make sure that everything's OK and the sixth week I go in for a checkup.

I would tell the women [preparing to deliver], especially during this time, make sure you have everything you can do done before you have your baby. You won't be able to have that help as long as you are following that order. If you could do something with your hair, make sure it's up and out of the way so you don't have to worry about it for a few weeks and make sure your house is clean. Clean to your fullest ability to where after you have your baby, you come home to a clean house. I would tell them also to just go with the flow as far as with your birthing plan. Try not to put so much pressure on that. Just allow things to go as they are, because it's already predestined how it's going to be and trying to put control over it, especially during a pandemic, is really hard.

As far as partners go, mine has been great. We had our [pregnancy] apps together and would read them and he would say, "Hey, read the 32nd week because you were just talking about that." And I said , "Oh, OK." And then I would read it and like, oh yeah, I am having this symptom or that symptom. He cleans, is a great listener, and helps me in any way he can. I really got lucky.

[Motherhood] has been fantastic. I love all facets of it. The good, the bad, and the ugly. I love it. I really do. I’m so in love! I'm breastfeeding now, trying to get through that whole lactation thing. I love the bond and the health benefits he gains from breastmilk. I hope to do it for as long as possible. But motherhood has been so rewarding, way more rewarding than I ever envisioned it would be. I'm just so enamored with my little nugget, I call him.

This interview has been edited for clarity and length.