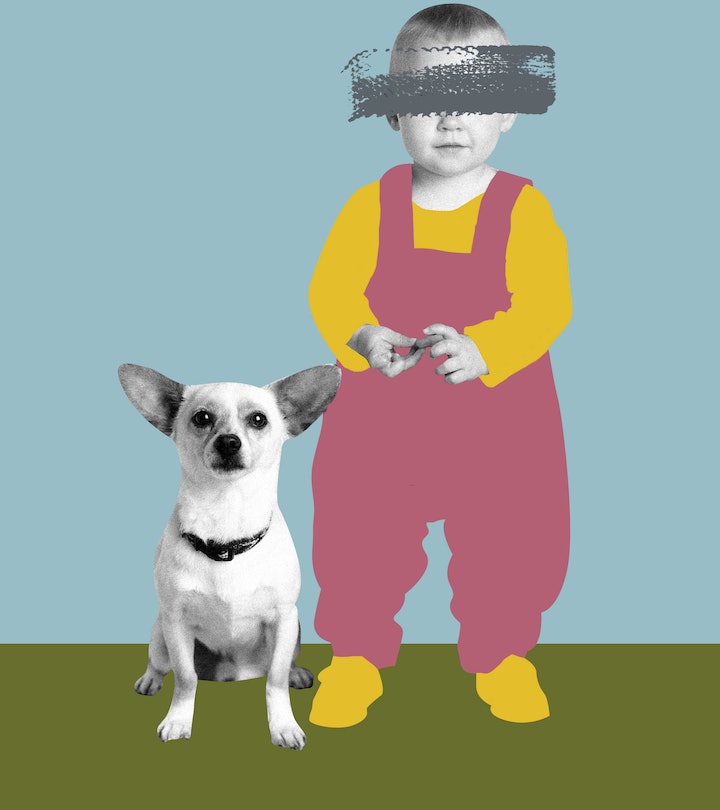 I Thought I Loved My Dog Unconditionally, And Then I Had A Baby

I was insulted and flabbergasted at the suggestion that the boundless love I felt for Nano would ever be paltry compared to a human baby. And then I had one.

My father predicted this. “That dog is ridiculous,” he’d say, shaking his head. “That dog wishes it was a dog.”

It was hard to argue with him. Eleven pounds and more fox than canine, Nano was terrified of doorways and strong breezes when we brought him home from the ASPCA 14 years ago, and he’s made only minimal headway towards being a normal dog since then. He shapes his little body into a comma of anxiety, with his tail under his legs and his chin near his knees, anytime a stranger approaches with the good intention of petting him.

My father liked real dogs like German Shepherds or Labrador Retrievers. Tiny chihuahua mixes of unknown pedigree were functionally useless. One late summer day in Nano’s first year, we were standing in my parents’ backyard in Rhode Island, my dad tending to the grill while I watched Nano, squealing about his cuteness. My father flipped a steak, narrowed his eyes thoughtfully and said, “You just watch, one day you’ll have a kid and then you’ll understand what it means to love a small helpless creature unconditionally, and this” — here he waved his hand at the dog — “isn’t that.”

I was insulted and flabbergasted at the suggestion that the boundless love I felt for Nano would ever be paltry compared to a human child. How very dare he! Nervous though he was, Nano returned our affection with an intense singularity; my husband and I were the sum total of his world. He yelped with delight when he heard my voice in the stairwell. He slept under the covers at night, curled up between my ankles. He sat on Stuart’s lap while we watched television in the evenings, our tiny vulpine prince.

Then, in the early winter of 2018 I gave birth to a different kind of small helpless creature. Though my father had died in 2009, the rich irony of his prediction began to unfurl. At first, my love for Alex was primal and shapeless, nothing like love I’d experienced before but rather a desperate attachment I didn’t understand, like a sweater I had pulled on but couldn’t get my arms either into or out of. I would have told you in the wildest, most disjointed moments of my matrescence, in the formless day/night mishmash of his first two months, that I didn’t know if I loved him but I would walk on coals to make him happy, so perhaps this was just a very different version of love; more disorienting than exhilarating, deeply unsettling.

And there was Nano, quivering at the foot of the bed, bounding down the sidewalk on walks.

With time, as Alex woke up to the world and experimented with those first gummy smiles, that destabilizing vortex began to ebb. He was becoming a person, I was becoming the mother I wanted to be, and we were a family; I felt overcome with love.

And there was Nano, quivering at the foot of the bed, bounding down the sidewalk on walks. Everything had changed, but, at least at first, Nano seemed the same. He was clearly delighted that Stuart and I were home all the time during our parental leave, in bed for half of the day, exactly where he wanted us. The baby was basically a burrito, an elaborate throw pillow we insisted on carrying around. If Nano didn’t look too closely, I’m guessing, he didn’t even notice Alex.

But then we both went back to work, and our nanny entered the picture. She was a gem, walking in every day with smiles and songs for Alex and indulgent patience for Nano’s antics, but I could see how it played in Nano's stupid little birdbrain, this dog who has never warmed to anyone but me and Stuart. Every day now, this new person was here, singing to the burrito, carrying the burrito, opening and closing the apartment door at will. Nano's affection waned, he startled more easily. He often sulked out of the room rather than cuddle with us, our sullen canine teenager. He started shrieking when we put on his harness for walks, flexing his nervous capacity to set the rest of us on edge, too.

It all began to truly unravel when Alex started crawling. Nano couldn’t be in the same room with Alex, and yet he couldn’t not be in the same room as me, and this quickly became an impossible rubix cube of space and needs and anxiety. I would arrive home and Alex would be unabashedly delighted to see me, clambering all over my lap, babbling with joy. Nano’s delight in my homecoming was more complicated. He would follow me from the living room to the nursery and then pace back to the living room, the whole vibe amounting to just ditch the kid, okay? It was as though every day I walked in the door, he needed me to be walking back in time, to our lives before Alex.

Then he started peeing on the rug.

I was at first perversely hopeful that there was something wrong with his bladder, or his kidneys, or his prostate — anything that would explain this, and give us something we could treat. But after two months of pursuing increasingly unlikely diagnostics with his vet, I had to admit to myself that Nano only ever peed when I was at home with him, when I was tending to Alex — often right in front of me, with a mixture of unhinged determination and apology in his slightly bugged-out eyes. There was nothing physically wrong with him and yet everything, to him, was wrong. This was his flag hoisted above the parapet, his last desperate resort.

And then I realized it so suddenly, with such clarity, that I was shocked I hadn’t seen it before. My father was right. I love the dog but not unreservedly. This love, it turns out, is finite.

Of course I was frustrated — nobody wants their dog peeing on the rug — but what surprised me was my anger, my sense of injustice. Every time he did it, I would outwardly do the right thing: scoop him up, snap on the leash and take him out for a walk, sometimes with Alex dangling from my other arm. But inwardly I would feel this wild rage, this desire to truly communicate to him in a way I had never needed to before, to say, I love you but stop this; or, I love you but you are making my life so complicated or, worst of all: I might not love you as much if you keep doing this.

And then I realized it so suddenly, with such clarity, that I was shocked I hadn’t seen it before. My father was right. I love the dog but not unreservedly. This love, it turns out, is finite. It has a beautiful garden wall built around it demarcating the area past which he cannot ask my love to thrive: I love you, Nano, but only if you do not complicate my life.

This isn’t to say that we just let the dog pee on the rug. Our vet prescribed Prozac to help with his anxiety, and a behaviorist who helped us establish new routines. And to greater and lesser degrees, all of the above has worked in harmony so that an uneasy peace prevails.

But when I permit myself to get a little woo-woo about the psychic wavelength between me and the dog, I know our relationship has been permanently altered even as the specific tension has passed (I even bought a new rug). My love for Nano felt — was!— infinite until I experienced another kind of love, the humbling and life-altering experience of knowing I will love Alex until my very last breath, will love him no matter what happens to him, or me, or us; and suddenly in comparison my love for Nano became earthbound and transactional. It’s as though the fine print had been there all along: be the creature we agreed you would be when we entered into this. Do not test the garden walls. I can’t promise I will love you the same way if you jump that fence.