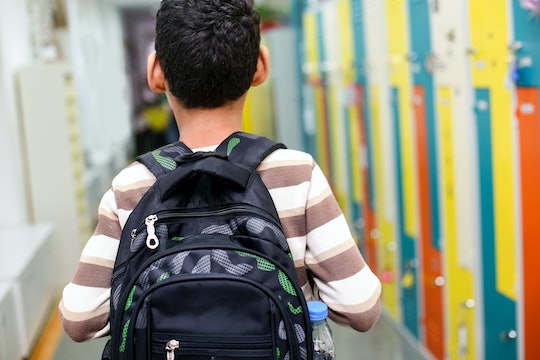 But parents aren’t too happy about the new policy.

A school district in Idaho has moved to ban all backpacks from its middle and high school campuses after two students brought guns to school in separate incidents that occurred less than six months apart. While the ban has forced students at Jefferson School District 251 to find creative ways to haul their books and supplies from class to class (such as laundry hampers, ice chests, and shopping carts), district officials have said it’s meant to serve as a precautionary measure against future gun-related incidents.

“Effective immediately, backpacks will no longer be allowed at Rigby Middle School, Farnsworth Middle School, and both Rigby and Jefferson High Schools,” Jefferson School District 251 Superintendent Chad Martin wrote in a message to parents dated Sept. 23. “We ask that you partner with us in keeping all of our students safe.”

Last week’s incident at Rigby Middle School comes less than six months after a 6th-grade student at the same school shot two students and a custodian before being taken into custody. In May, Jefferson County Sheriff Steve Anderson told reporters a student had fired multiple shots inside and outside the school before being disarmed and detained by a teacher. None of the people shot sustained life-threatening injuries, according to East Idaho News.

However, the district’s new policy has not been well received by all parents. “How can my student get work materials home without a backpack?” one parent questioned after the district announced the policy in a Facebook post. “Also, no backpacks should mean more time between classes. My student cannot be the only one who can’t get from class, to a locker, and back to another class, in 3 minutes.”

A number of parents decreed the ban as a “bandaid solution” and urged the district to rethink its approach. “Screening of bags at the door would make more sense than trying to remove them from the students,” one parent suggested.

“The first and most obvious problem with the no backpack plan is that kids who want to get a gun or weapon in the school can still conceal it on their body,” another added. “Metal detectors and searches would be more effective.”

Others questioned how officials expected students who participated in athletics, music, dance, or other extracurriculars to haul around everything they might need for a day of classes and practice. “This knee-jerk reaction of banning backpacks is completely impractical and asinine,” one parent wrote on Facebook. “What is the proposed way for the kids to carry books, notebooks, supplies (such as pens, pencils, calculators), lunches, instruments, and whatever else is needed for school if they can't use a backpack? Ridiculous. I'm sorry that we had another incident in this district but why are we punishing everyone?”

A video shared on TikTok by a Rigby High School student showed the creative ways students have found to get their stuff from class to class. In it, at least one student was seen using a red Radio Flyer wagon to transport their belongings. Another student was seen carrying an aquarium full of books down a school hallway, while another dragged an ice chest and another rolled a three-tiered cart. Other students were seen pushing strollers full of school supplies, dragging a sled, or lugging around baskets and wooden crates.

But Jefferson School District 251 isn't the first district to ban students from using backpacks. Earlier this year, KPIX reported high schools in Texas, Illinois, and Ohio had banned backpacks for various reasons. In Texas, Dalhart Intermediate school instituted the ban at the start of the school year after a student brought a large knife onto campus. In Illinois, Rock Island High School kicked off the year with a no backpacks policy due to concerns they took up too much space in classrooms.

Following this year’s gun-related incidents, Jefferson School District 251 has also asked parents to ensure any firearms they may own are kept locked and away from where students may gain access to them. “Please keep your firearms safe and inaccessible to students,” Martin wrote. “If you notice changes in your student’s behavior, attire, or personality notify us so we can help your student.”