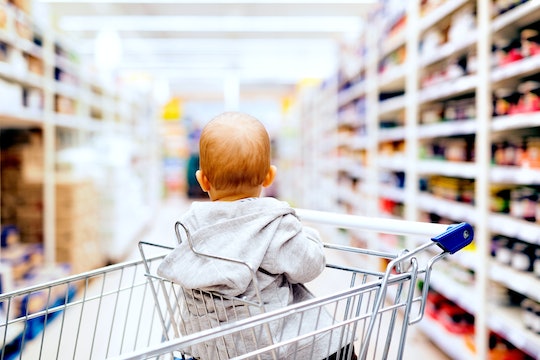 If You’re Feeling Somehow Guilty For Being Broke, You’re Not Alone

At the time that I gave birth, I was the poorest I have been in my adult life. I don’t use “poor” as hyperbole here, but as an accurate descriptor of a financial state. While I’ve spent a lot of my adulthood below the federal poverty line, or dancing somewhere near it, during that month in 2015 I reported no income, and my spouse had just started working again after about two months out of work. I had wanted to be a parent more than anything in the universe, and I was excited about meeting our baby and starting the weird and wonderful journey of taking care of him. But I also felt scared and guilty about what I had to offer him. We as a society love to repeat cliches like “love is more important than money,” and “money can’t buy happiness” but the reality is that you need stuff to live, and stuff costs money, and having less money makes everything harder. If you’re a parent feeling guilty about being broke, trust me, you aren’t alone.

Before having a child of my own, I had filled my head with stories of poor parents who were “doing it right.” I wanted to believe that, sure, having money would be nice, but the really important things about being a parent weren’t dependent on that. When I was planning to get pregnant, people asked about the money issues, and I always repeated the same thing: having children is not a luxury good only for the middle class and above, many poor and struggling people have kids and those kids are perfectly fine. Internally, I held up both real and imaginary parents overcoming adversity.

In the first year of my child’s life, we were so broke we moved three times.

Most of my inspirational parents were women, they were mothers, mothers in adverse situations who managed to make things work. There was a good friend’s mother, a woman who was on public assistance and often couldn’t afford to keep a phone, but managed to put her daughter through private school on her own, because she believed that giving her the best education possible was the most important thing she could do.

There was also Lorelai Gilmore, a character who perhaps only managed to survive with as much flair as she did by not being real, but nonetheless had an inspiring story. She worked as a maid and lived in a literal cottage while her daughter was a baby, but eventually managed to “work her way up” to managing the whole hotel she used to clean. And then there was Molly Weasley, perhaps the ultimate poverty inspiration, a mother of seven who somehow manages to keep everything afloat in the picturesque burrow despite living in constant fear that this is the year the family won’t be able to afford spell books. With these images and more filling my head, I went into parenthood with a “we’ll make it work” kind of confidence.

And then I had a baby, an actual, living, breathing, baby. And let’s be real for a minute, none of those stories prepare you for the reality of what raising a child without enough money is actually like. In the first year of my child’s life, we were so broke we moved three times. We were so broke we at one point had to stay with friends for a month and a half. When we did get an apartment, we lied about how many cats we had, because it was that or get rid of our cats. One day we misjudged when our next check was going to come through, and ended up with 20 bucks for groceries for the whole week (I’m not even going to tell you how many beans we ate that week). And I felt guilty for all of it.

Our lives have improved a lot since then, but it has been slow going, and has sometimes required a herculean amount of effort. We are still broke. These days we live in a house that we love in a neighborhood that we love, but we can barely afford our bills. The trade-off for the relative security of our living arrangement (as opposed to being squeezed into a tiny apartment in a building full of bugs and domestic violence) is that my spouse and I are just always working. I have to tell my 3-year-old to occupy himself while I finish up writing assignments, or email editors looking to drum up more work. We still cannot afford a car or car insurance, which means we have to say no to a lot of fun things we wish we could say yes to. Every time I buy groceries, it is a budgeting feat of epic proportions.

Throughout my child’s three years on this planet, I have spent a lot of time feeling torturously guilty about my lack of funds. Some of the things are small; he may ask for a certain toy and I have to say no. Other things feel larger and more complex: we don’t live in a great school district, and there’s a private school I would love to send him to, but I don’t know if we would be able to afford it, even with substantial financial aid.

Parenting lends itself to guilt and worry almost by definition, certainly American parents are masters of the worry/guilt cycle. But in a capitalist society, being broke feels like a moral failing.

And there are more overarching themes, as well. I’ve read about the effects that poverty can have on a child while growing up, and it isn’t pretty. Sometimes I lay awake at night thinking about it. All of it makes me feel like a really sh*tty parent, and none of it looks like the image I had in my head of what parenting as a poor person would be like. I've learned, again and again, that it is difficult to prioritize when there isn't enough money to go around, and also that I'm a human being and sometimes I just want nice things. Rather than spending our days holding hands singing “Even Though We Ain’t Got Money,” I spend most of my time scheming on how I can get just a little more work in, make just a little more money, cut just one more corner, in the hopes that one day it’ll be a little easier.

Parenting lends itself to guilt and worry almost by definition, certainly American parents are masters of the worry/guilt cycle. But in a capitalist society, being broke feels like a moral failing, even if you logically know it isn’t. Being a broke parent then, leads to some truly next level guilt. Am I screwing my kid up for life? Am I some kind of monster?

I think a lot about my own mother, who raised two kids without a lot of money — my parents obtained a middle class income sometime in my teens. She was a master budgeter, a deal shopper, and she spent hours every Sunday slipping coupons and strategizing her grocery shopping. She also never really let on when things were bad, we never felt a sense of worry or economic dread around us. When I was 5 years old, we moved from a city where we had lots of friends and relatives to a rural area where we knew almost no one, for my dad’s job. As a kid, I was annoyed by the move, and blamed my parents for choosing this option for our family. It was only after I became a parent myself that I got the full story out of my mother. It wasn’t a choice — if my dad didn’t take the transfer, he was going to lose his job, and at the time he was our only income. So we moved four hours away from almost everyone we knew, and to avoid running up a huge long distance bill (those were the days) in her loneliness, my mother had the money saving idea of “let’s just not get a phone.”

Being a broke parent is full of impossible decisions like that.

You don’t see them in retrospect, in the stories we tell about families without a lot of money. My hope is that, when my own child is an adult, telling stories about his childhood, they won’t be stories about how awful it was not to have everything he wanted. With any luck, I’ll be able to pull this off so that my kid’s story is “we didn’t have much money, but we had a roof over our head and we were happy. If I can pull this off, if I can keep him insulated from the stress and worry of poverty, he won’t understand the struggles we’ve gone through together, will remember the fun things we did together than the eight thousand times I had to say no. And that, as far as I can tell, is the only antidote to the guilt.

I am trying to turn my life into one of those fictionalized stories about families in poverty, but I’m not doing it for me, I’m doing it for my kid.