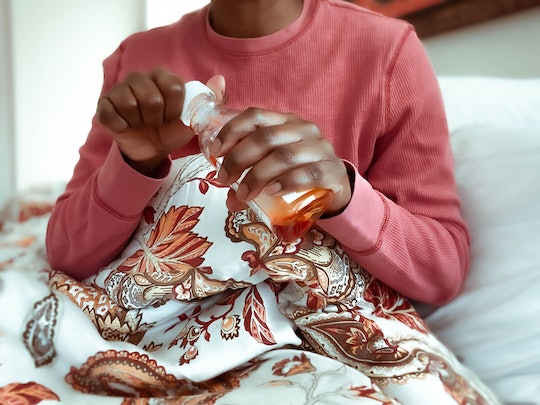 Experts Weigh In On Chugging Mucinex To Help You Get Pregnant

If you’re on TikTok and trying to conceive, you’ve probably seen the video about the “COVID Secret” of fertility. In the video, the young woman said that the Mucinex she took while suffering from COVID increased her fertile signs. But does that really work? And is it safe to take Mucinex to help you get pregnant, or is this one TikTok trying-to-get-pregnant myth you need to forget?

Anecdotal evidence has shown that the active ingredient in Mucinex, guaifenesin, may have benefits for women with fertility problems as a result of a cervical failure, according to the Journal of the American Board of Family Medicine. However, this study was very small, and not longitudinal. There is also a very small cohort of researchers that think that it might also benefit men with sperm motility issues.

But how does it work? OB-GYN Sherry A. Ross tells Romper, “During ovulation, there is an ‘egg white’ vaginal discharge that is thought to help propel viable sperm to meet the awaiting egg in the fallopian tube to be fertilized if you are lucky that month.” That’s what TikTokker Julia Schuller was referring to as a “fertile sign.”

“Healthy and loosened mucus is helpful in this process," Ross says. "Mucinex, with its active ingredient guaifenesine, is used to help loosen up mucus in the lungs in patients with congestion, and it also helps loosen up cervical mucus inadvertently. Men also claim the ejaculate which contains the sperm is also loosened up, which helps in the fertilization process.”

Unexplained Infertility noted that guaifenesin makes the cervical mucus less viscous and more fluid, allowing the sperm to travel faster through the cervix to get to the egg. When a woman has little or thick mucus, the cervix becomes a hostile environment, unable to facilitate the movement of the sperm to the egg. The same rule applies to sperm — men with poor motility often have more viscous semen. Think of it in terms of maple syrup versus molasses. If you pour molasses over a slanted plate, it doesn't just race down the surface to get to the bottom, but maple syrup, on the other hand, has a quicker progression down the plate and onto the table. Guaifenesin makes the sperm go from molasses to maple syrup, speeding its journey through the cervix.

But the evidence is purely anecdotal at this point, as there are no major studies that conclude that this is an effective means of promoting fertility, Ross says. However, she notes that many couples trying to conceive swear by it. (Myself included.) She also reports that it is technically safe, as long as you’re not continuing to use it after you get pregnant, and as long as your doctor knows you’re doing it.

I also spoke with Kathryn Wright, MD with Facey Medical Group to determine the absolute safety, and she tells Romper that because there is no actual, peer-reviewed evidence of the efficacy of the treatment, and because it's thinning the mucus everywhere in your body, not just in your cervix, she thinks it's likely to be detrimental to trying to conceive instead of helpful. She notes that it's best for women to avoid taking Mucinex and it's best to rely on the normal, mid-cycle changes that occur naturally in most women.

Dr. Allison Hill, OB-GYN, agrees to a point. She argues that while it may not be harmful to take while trying to conceive, it most likely won't help. Hill tells Romper, "Yes, Mucinex is safe to take, but there is no scientific evidence that it improves fertility. The active ingredient guaifenesin is usually taken to thin the mucus in the lungs. It also can thin the cervical mucus, however there is no evidence that this helps people get pregnant."

All this evidence lines up with the International Journal of Clinical Medicine that concluded it's considered safe for men to take the recommended dosage of guaifenesin for the duration of trying to conceive. For women, it's a bit more complicated. While guaifenesin is generally considered safe for pregnancy, there are always risks. The study printed in Unexplained Infertility noted that women only took the drug for the week of their expected ovulation, minimizing the risks of exposure to the developing tissue.

If you're having trouble trying to get pregnant, see a reproductive endocrinologist. I did, and I am forever grateful to my doctor for helping me bring my babies into the world. Old wives' tales, even modern ones, can often bring more issues than they do corrections. Chugging cough syrup, like Mucinex, when you aren't even sick, probably isn't the best way to try and get pregnant, even if it might work. If you actually want to help your cervical mucus, talk to your OB-GYN about what you can do.

Sherry A. Ross, MD, OB-GYN and women’s health expert in Santa Monica, CA and author of She-ology and She-ology, the She-quel

Dr. Allison Hill, MD, OB-GYN and author of Your Pregnancy, Your Way,

This article was originally published on Sep. 12, 2017