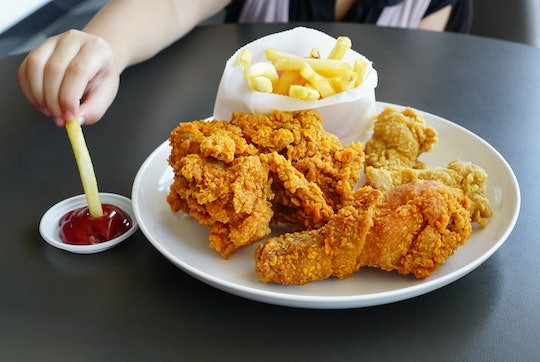 “Like almost all goods right now, supplies [of chicken tenders] are somewhat tight.”

Parents of picky eaters may be in for a rough winter of mealtime negotiations as industry insiders warn of a potential shortage of chicken tenders. Labor issues and supply chain disruptions brought on by the coronavirus pandemic have reportedly already made chicken tenders more expensive and harder to find. Now, even some popular nationwide restaurants are strategizing on how to handle a potential drop in chicken tender supply.

What Exactly Is Going On With Chicken Tenders?

High demand for heavily processed chicken tenders may be putting a strain on the nation’s chicken suppliers, who’ve already seen their supply impacted by severe weather and labor shortages. According to the Today Show, each American is expected to eat 100 pounds of chicken this year alone, many of which will come in the form of chicken tenders. However, some consumers have recently reported having trouble finding tenders in stores or being shocked at their recent rise in price.

Tyson Foods, one of the world’s largest chicken suppliers, warned of an unexpected drop in poultry supply in September, citing issues like the pandemic and weather. “Multiple, unprecedented market shocks, including a global pandemic and severe weather conditions, led to an unexpected and drastic drop in meat processors’ abilities to operate at full capacity,” USA Today reported the company said in a news release. “Labor shortages are also affecting the nation’s pork and poultry supply.”

Part of the issue is that it takes more work to get chicken tenders onto store shelves than it does other, simpler chicken products. “Tenders require more processing to package and sell, which industry experts say is part of the reason why they can be harder to find and now more costly when you get them in your local market,” NBC News’ Kerry Sanders told Today.

This Isn’t The First Time Chicken Supply Has Been Threatened

It’s no secret that chicken tenders are a universally loved food. But because demand for chicken tenders is consistently high, it’s easy for the sources supplying that demand to get stressed when faced with unforeseen challenges such as those brought on by the pandemic or severe weather. In fact, National Chicken Council spokesman Tom Super first warned that chicken tenders were in “very tight supply” in May after severe winter storms affected supply, according to USA Today.

“Supply is somewhat tight,” Super told the news outlet. “Chicken producers are doing everything they can to overcome the devastating impact of Mother Nature when she inflicted the once-in-a-lifetime winter storm on Texas and nearby states — major chicken producing regions.”

Data from the U.S. Department of Agriculture has shown the number of chickens raised for meat was down 4% in the first quarter of 2021 with the number of pounds produced down 3%, USA Today reported.

Separately, Tyson, one of the world’s largest chicken processors, blamed their reduced chicken supply on the new roosters they’d brought in to improve chicken meat quality. “Quite frankly, we made a bad decision,” Tyson’s chief operating officer and group president of poultry Donnie King told the New York Post in May, adding the company estimated that roughly 50% of its supply shortage could be traced to the underperforming roosters.

Even Restaurants Are Impacted

According to Bloomberg, even restaurants are feeling the impact of a stressed chicken tender supply. Earlier in the fall, KFC opted to stop showing chicken tenders in advertisements due to concerns the fast-food chain would not be able to secure enough tenders to meet increased demand. “On chicken tenders, we have enough to supply demand, but we would love to have more to be able to aggressively promote it on TV,” KFC President Kevin Hochman told Bloomberg. “In terms of advertising and promotion, we're going to focus on things we have abundant quantities of.”

Of course, chicken tenders aren’t the only kid-friendly food reported to have been impacted by the pandemic. Earlier this year, parents across the country reported struggling to find Lunchables and Uncrustables at their local grocery stores. As Romper has previously reported, Kraft Heinz reported seeing “all-time high demand” for Lunchables in September with sales of the pre-packaged kits growing by double digits for the first time in five years. Later that same month, The J.M. Smucker Co., which produces the pre-made crustless sandwiches, blamed a shortage of Uncrustables on an earlier decision to reduce the production of certain items, including peanut-butter varieties of Uncrustables, in order to prioritize replenishing supplies of other higher-demand products.

But despite the drop in production seen earlier this year, chicken production has since increased and industry insiders like Super are hopeful that suppliers can avoid a full shortage.

“Like almost all goods right now, supplies [of chicken tenders] are somewhat tight, but I would say it falls short of any ‘shortage,’” Super recently told USA Today. “Like almost anything right now, some products might take longer than usual to get to where they need to be, but in most cases they get there.”

While it’s not yet clear how bad a scarcity might be, one thing is for sure, a chicken tender shortage could seriously disrupt family dinners — unless you know how to make your own.