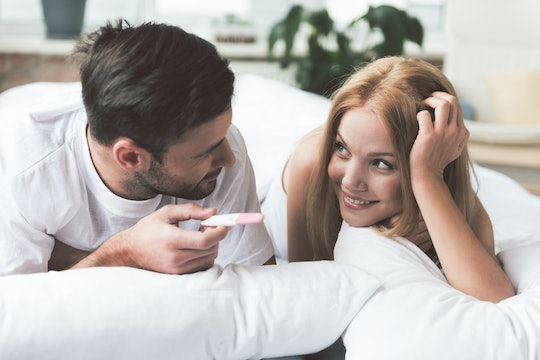 Turns Out, Valentine's Day May Not Be The Most Popular Night To Conceive

Though many people will swear up and down that Valentine's Day is all about telling their significant other that they love them and doing something nice for that person, there's often a subtext to it all — will they be having sex that night? Which is totally cool. There's nothing wrong with planning a perfect date night and having it culminate in bed. But what about the baby making? If theoretically there's more sex happening it makes you wonder: is Valentine's Day a popular day to conceive?

Given that the birth rate in November is ranked ninth among the other months, according to Statistic Brain, Valentine's Day, is probably not a popular day to conceive. Babies conceived on February 14 are likely to be born sometime in mid-November, so if there isn't a burst of births at that time, it doesn't sound like there's a lot of baby making going on during Valentine's Day. However, there is a lot of sex. A study conducted by SKYN condoms and a digital marketing and advertising agency called AMP Agency surveyed 5117 millennial men and women. They were asked all sorts of questions about sexual behavior and preferences, including what days are marked with the most sex. Birthdays were the most popular, but in second place was Valentine's Day. The most surprising thing was that Valentine's Day sex was more frequently reported than wedding night sex.

So if Valentine's Day is chock full of sexual activity, why isn't there a flurry of births 40 weeks later? It could be because having sex after (or before!) Valentine's Day dinner is so predictable, it's the one night of the year you are definitely going to be on your birth control A game. Durex, the condom company, reported condom sales were 20-30% higher around Valentine's Day than the rest of the year. The American Social Health Association has declared February 14th National Condom Day, in the United States, in case you weren't thinking ahead and needed a reminder to keep a few condoms around that night, "just in case." The United Kingdom takes a more pessimistic, glass-half-empty approach on Valentine's Day and celebrates National Impotence Day, while Australia has the more general National Sexual and Reproductive Health Day.

The lower rate in Valentine's Day conceptions actually works out pretty well from a biological standpoint. Biological anthropologist Helen Fisher told Splinter News that November births were not adaptive. She said, "being born in November meant being a helpless newborn heading into the coldest part of the year (in some regions), when food was scarce and parents weren't getting as much exercise." Maybe human bodies reflect nature's cycles more than anyone realizes.

If you are looking to get pregnant and you like the idea of a Valentine's Day conception, there are things you can do to increase the likelihood of getting pregnant. Of course, you need to be lucky enough to have your cycle synced to be ovulating on February 13-16, as eggs live 12-24 hours after ovulation and sperm can live up to 48 hours in the uterus and still fertilize the egg. Using an ovulation kit or tracking your cervical mucous can help you figure out if you might be ovulating in the magic window.

Whether or not conception on Valentine's Day is your goal, it's great to go into the day planning an evening for you both to celebrate your love. It doesn't have to be elaborate for it to be amazing. It doesn't even need to contain fancy gifts. And for some couples, especially when Valentine's Day falls midweek, the celebration needs to be postponed or modified. Whatever you decide to do, try to make it something you both feel good about and enjoy. And if that means having a little unprotected sex, well, then your November baby will not be crowded out of the nursery when they are born because comparatively, it's a pretty mellow time of year to give birth.

More Like This
22 Valentine's Day Pregnancy Announcement Ideas Sweeter Than Candy
5 Superstitions About Babies Born On Valentine’s Day
Fun, Sexy Maternity Lingerie, For When The Mood Strikes
The New Dad In Your Life Will Love These 20 Sweet Valentine's Day Gifts
What Parents Are Talking About — Delivered Straight To Your Inbox