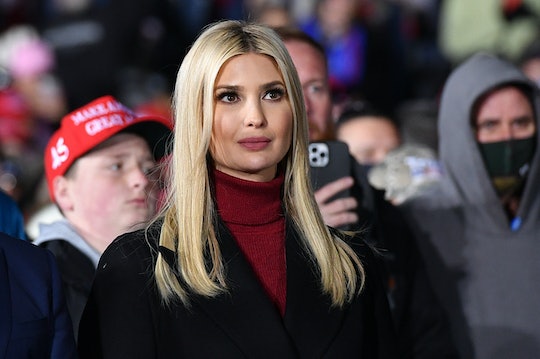 The president's daughter later clarified that only peaceful protests were "patriotic."

As supporters of President Donald Trump clashed with police and violently stormed the Capitol building on Wednesday, Ivanka Trump called pro-Trump rioters "patriots" in a tweet she later deleted. The president's eldest daughter later returned to Twitter to clarify that only peaceful protests were patriotic and violence was unacceptable.

"American Patriots — any security breach or disrespect to our law enforcement is unacceptable," Ivanka wrote in a tweet that has since been deleted. Before Ivanka could delete her tweet, however, it was captured and shared via screenshot by multiple Twitter users.

Ivanka initially posted her tweet as a pro-Trump protest being held outside the Capitol building morphed into a riot when protesters violently stormed the building and attempted to force their way into the House and Senate chambers. At the time of the riot, members of Congress were meeting to count Electoral College votes and certify President-elect Joe Biden's recent win. According to NPR, at least one person had been shot as police clashed with rioters and transported to a local hospital for treatment.

On Wednesday, CNN correspondent Kate Bennett asked Ivanka to clarify her tweet, specifically asking if she was calling those who had stormed the Capitol building "patriots."

"No. Peaceful protest is patriotic," Ivanka tweeted in response. "Violence is unacceptable and must be condemned in the strongest terms."

In a video message directed to his supporters at the Capitol, Trump doubled down on his claim the election had been "stolen" from him and his supporters. "I know your pain. I know your hurt," Trump said Wednesday. "We had an election that was stolen from us. It was a landslide election and everyone knows it, especially the other side. But you have to go home now. We have to have peace. We have to have law and order."

"Go home," Trump continued. "We love you. You're very special."

Earlier in the day, Trump took to Twitter to ask his supporters to "remain peaceful" while gathered outside the Capitol. "No violence! Remember, WE are the Party of Law & Order," Trump tweeted. "Respect the Law and our great men and women in Blue."