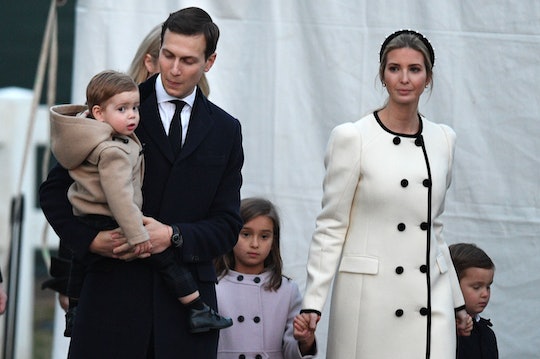 Everybody has to follow the rules or nobody is safe.

Parents at the private school Jared Kushner and Ivanka Trump's children have attended since the family moved to Washington D.C. recently told both CNN and the Jewish Telegraphic Agency that they'd had it with the couple's public disregard for COVID-19 protocols. Shortly after the president was confirmed to have the virus, school officials confronted the duo. But rather than change their ways and follow the school's COVID-19 protocols, Ivanka and Jared reportedly withdrew their kids from school.

At least three parents told CNN and the Jewish Telegraphic Agency that they and a number of other parents at the school had raised concerns with administrators after repeatedly seeing Trump and Kushner refuse to comply with recommended COVID-19 guidelines. (In an effort to protect the privacy of the Trump-Kushner children, Romper has elected not to name either their former school or their new one.)

While members of the first family have sometimes been seen wearing face masks in public, their use of the cloth face coverings is inconsistent at best, according to Reuters. In late September, for example, Trump and other members of her family reportedly refused a Cleveland Clinic doctor's request to wear a face mask indoors at the first presidential debate. Days after the debate, both the president and First Lady Melania Trump would reveal they had tested positive for COVID-19.

"There was no secret about their behaviors because everyone could see them," one parent told CNN. "What [they] did was just not OK."

But in refusing to wear masks while attending a large indoor event, Trump reportedly wasn't just violating public health recommendations. According to the Jewish Telegraphic Agency, her children attended a school that specifically asked students' families to avoid large events or gatherings, practice social distancing, and wear masks outside of school to limit the risk of an outbreak among students and staff.

“Students and families are expected to adhere to any and all social distancing guidelines and mask requirements while not on campus to minimize the risk of contracting COVID-19 as well as reducing the risk of exposing employees and/or... students to COVID-19,” guidance from the school read, according to the Jewish Telegraphic Agency. “To help reduce the risk of COVID-19 exposure at the School, the School asks all families to limit their attendance at large public or private gatherings, events, and other activities to those where social distancing can be maintained and guidance regarding masks is followed. Families and students should avoid hosting or attending large gatherings where proper social distancing measures are not feasible.”

Due to the public nature of their jobs — both Kushner and Trump serve as advisors to the president — fellow parents at the school were well aware of when the Trump family opted to disregard public health guidelines. “There was concern for the safety of children because it was very clear the Kushner parents were violating public health recommendations,” a parent told the Jewish Telegraphic Agency.

In a statement to the Jewish Telegraphic Agency, school officials confirmed that Trump and Kushner had withdrawn their children but declined to provide additional details such as the reason behind the withdrawal. An unnamed source reported to be close to the couple told the paper the two wanted to enroll their children in a school that offered more in-person classes as a show of support for schools reopening.

In a statement to CNN, White House spokesperson Carolina Hurley slammed reports regarding the family's reason for enrolling their three children in a different school. "Unnamed sources attacking a family's decision about what is best for their kids in the middle of a pandemic is shameful," Hurley said, per the cable news outlet. "As is true for all families, schooling choices and education are deeply personal decisions and they owe no one, especially idle gossips seeking press attention, an explanation."