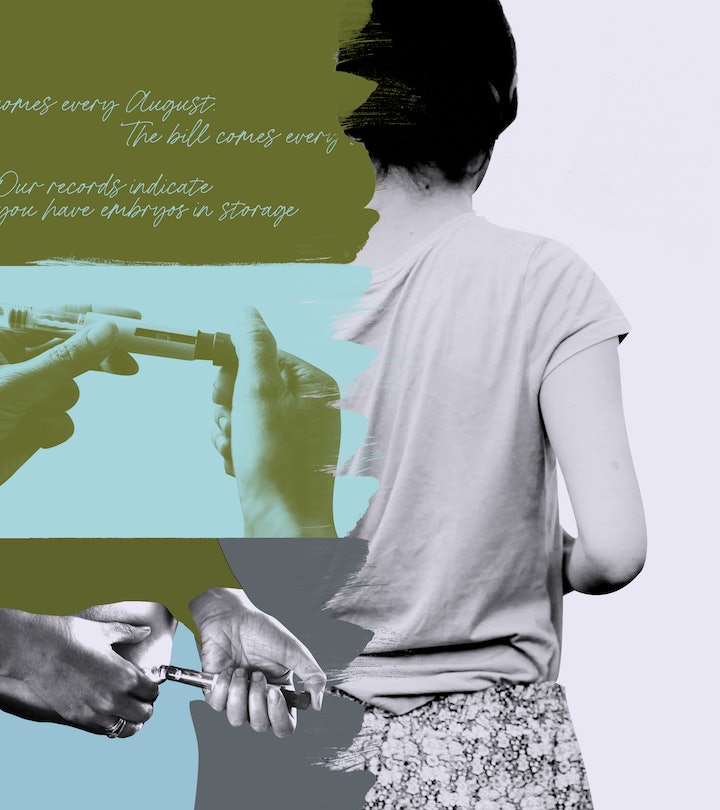 Saying Goodbye To Our IVF Embryos, And The Lingering Possibility Of 1 More Baby

We have five IVF embryos in storage, and every August their rent is due.

The bill comes every August. Our records indicate you have embryos in storage at The Reproductive Medicine Laboratory. We have five of them and their rent is due. Every year the bill pokes at the same question, some version of the same conversation we have every few months anyway: Should we have another baby? Four options are presented in the letter: continue storage, donate to scientific research, donate for embryo adoption, or discard them. The latter three are by far the most complicated options and never ones we’re ready to seriously consider. To avoid those deliberations for now, we write the check and buy ourselves another year of contemplation.

The problem with this past August is that I am 39 years old. My husband will say with certainty that he is done. I will say you can’t know or feel anything with certainty. I keep the door ajar to this hope because closing it completely feels too final, an ill-advised tempting of fate. The conversation is circular and virtually the same every time we have it. I ask him to list for me the reasons we couldn’t or shouldn’t have another baby. Every answer is methodic, solid, calm, and rational, if a little lacking in pizazz. My reasoning is much more ethereal, flimsier: “I wanna” or “just because.”

“Tell me again why we can’t have another baby,” I say.

“We can’t afford it. We have too much debt.”

It’s a numbers game and I want another crack at it. We lost our son, Paul, in 2012. He is what’s considered a full-term stillbirth — a phrase that makes me chafe because it reduces his whole being to a clinical term, a statistic. But it’s the only leg I have to stand on. And it’s a shortcut explanation while I make my way through the world. One of the cruel things about child loss is that you walk around with this ghost baby in your roll call. I look like the mother of two daughters. And I am, but it’s not the whole story. So forever and ever, we will be behind. We can have two (three) kids or three (four) kids or four (five) kids. I know he’s there; the rest of the world doesn’t.

I want something at the intersection of a whim and intuition, a magical timing.

We decided to do IVF in 2014. After we lost Paul, I had two miscarriages. My body was steadily revealing itself as a liability. IVF was an expensive last call. An SOS for our marriage, a way to give each other a break and eagerly hand over the reins to an expert. We were exhausted, hopeless, and endlessly irritated with each other. And our daughter was almost 5 by this point and I longed for her to have a sibling. With tremendous relief, we handed the problem over to the fertility professionals and delighted in being bossed around and told what to do.

But now, that definitive authority that I craved all those years ago works against me. This decision is not as easy as having sex and seeing what happens, though sometimes I wish it was. I crave whatever the embryo transfer-equivalent of that would be. I want something at the intersection of a whim, an intuition, a magical timing. Instead, this decision (or the absence of one) is the feeling of being haunted by these five little clusters that are ours and being housed across town.

A while ago, for my husband’s 40th birthday, we went out to dinner and got a hotel room downtown. I looked out our hotel room window and there was the shiny, new fertility clinic in its new location. There they were, right across the street. “Hi guys!” I waved like a goofball. “Maybe it’s a sign,” I said.

“Yes, it’s a sign the office moved,” he replied.

The bill arrives just before school starts. A milestone that is always bittersweet anyway; an elbow to the ribs reminding me how temporary this all is. Time marches on and the kids, if we’re lucky, continue to age. It cracks open an old standby daydream: pregnancy and newborns and nursing and napping. But in some ways, even I can admit to myself another baby feels greedy. It feels like an unnecessary season of television, a bloated remake. So to talk myself out of the daydream, I go dark. I think about all the possible things that could go wrong; all the ways another tragedy would affect our girls’ lives. I don’t know if our marriage has the reserves left in this department for any number of complications.

Every so often, I take an informal poll. I ask my 11-year-old, “Do you think we should have another baby?”

“This is all we can handle.” (Her father’s daughter.)

Everyone is a buzzkill in this family.

Maybe I think I want another baby, but what I really want is a time machine. I want my second-grade son bookended by his fifth-grade and 5-year-old sisters. I want to trick myself into thinking then I would know. Then I would have closure — a word I despise.

I want him to tell me that it’s OK to be done. That I will always be one behind. That I can’t keep having more babies to overcorrect or undo his loss.

Sometimes I want to ask Paul what to do. I don’t know where he is right now. But increasingly I feel like the child to his parent. I want him to tell me that it’s OK to be done. That I will always be one behind. That I can’t keep having more babies to overcorrect or undo his loss. His birth and death will always be there. It can’t be erased.

Last summer, I was lying on the couch and said to my husband (as if it had just dawned on me!), “I think I want to have another baby!” Sometimes I think I can spring it on him like a totally new idea. As if he’s had a fertility lobotomy and will be bowled over by the novel concept.

“So one of us is going to win and one will lose? That’s it? One of us will just have to make this big compromise?”

“But what about erring on the side of bigger, more? How can our kids only have one sibling? Isn’t this like an investment we make now that pays off later? Big, loud family dinners et cetera, et cetera.”

Last fall there was a hot 48-hour period or so when we were both on the same page. We both got excited about the possibility, talked ourselves into all the ways a new baby could "complete our family." (I don’t even know what this phrase means but it carries a certain persuasive connotation.) And so, in December — the month before I turned 40 — we had an appointment with our fertility doctor. Over Zoom, we caught up and got to introduce her to my youngest daughter, the embryo who’s now in kindergarten. We asked after our remaining five she’s been passively babysitting. They each have a grade or rating, a sex, a time stamp based on what day of development they were flash-frozen. I wrote all this information down to stare at later; to be able to feel into them in any way I can possibly know them. She laid out a plan for how quickly we could act and what the next steps would be. But as the hour came to a close, I realized these were not the instructions we required. What I needed to hear and couldn’t articulate was the secret fifth option. I wanted the answer to the question I eventually choked out: “But what do people do? How does this end if we don’t ‘use’ them?”

And she gifted us a response that made me cry because I realized it was why we scheduled this appointment. She shared that parents request to be buried with them at their time of death. Or they request them for ritual; to put in the ground beneath a tree or in a garden, or to pour into the ocean. At a time of our choosing, the clinic will release them to us in tiny test-tubes the size of toothpicks. They can sit with their brother’s ashes on what we affectionately call “Paul’s table.” It was a reframe I had been wrestling with for years: that maybe this is not between me and my husband. Maybe I’m asking the wrong questions.

What if it’s not, Do we have another baby? Or, How do you know when you’re done? Maybe it sounds more like, How do I parent these embryos the way I parent Paul? What does it look like to have these mini ghosts in my life? Maybe I need to get right with the five of them. I need to thank them for being willing, for pulling us out of a bleak no man’s land and bringing us back to a lighter place, for being ready to step in if they are called. Maybe it’s the four of us — me, my husband, our girls — living on one side of some flimsy line and Paul and them on the other. And maybe someday we can all meet up and I can say, “Thanks, Paul, for taking care of them until I got here.”