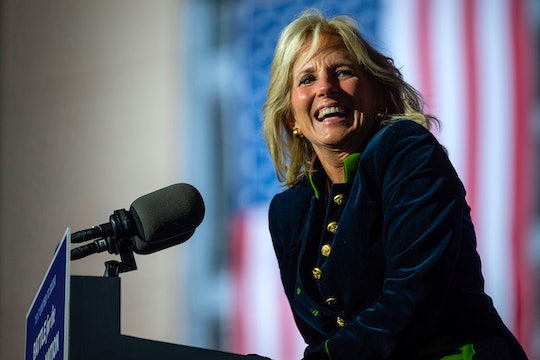 As First Lady, Jill Biden Will Make History With Her Teaching Job

“Teaching isn’t just what she does: it’s who she is."

Dr. Jill Biden made history in 2009 when she became the first Second Lady to hold a salaried job as a community college professor. And it she doesn’t intend to give up her passion once she moves into the White House. In fact, Jill Biden will continue teaching as she assumes the mantle of First Lady, marking the first time in 231 years that a presidential spouse will have an outside career.

Before receiving a Doctor of Education (Ed.D) in educational leadership from the University of Delaware in 2007, Dr. Biden held a Masters of Education and a Master of Arts in English. During her decades-long career as an educator, she has taught in a psychiatric hospital and public high schools, but has spent the majority of her professional life in community colleges, lauding such institutions as “one of America’s best-kept secrets.” Since 2009, she has taught English at North Virginia Community College including during the eight years she was Second Lady.

While she did take a sabbatical to join President-elect Biden on the campaign trail this year, she intends to go back to teaching, though she has not yet specified when. In an August interview with CBS Sunday Morning, Dr. Biden said that she thought doing so was important. "If we get to the White House, I'm going to continue to teach. I want people to value teachers and know their contributions and lift up the profession,” she explained.

But this move does more than change how the American public thinks about teachers: it calls into question what, exactly, is the role of First Lady. And the truth is we’ve never had a great — or at least not official — answer. Even the title is somewhat unofficial. While Martha Washington is roundly considered to be the first First Lady, the term itself wasn’t regularly used until about 100 years after her tenure. Different women in the role called it different things: Washington, for example, went by “Lady Washington.” Julia Tyler coined the entirely brilliant “Mrs. Presidentress.” And while Lucy Hayes (wife of President Rutherford B. Hayes) was not the first woman to be called “First Lady,” it was after she was referred to as such in the New York Independent that it finally really stuck, serving as an appellation for the de-facto White House hostesses ever since.

The role is generally filled by the president’s wife but has also been held by presidential nieces, sisters, daughters, and daughter-in-laws. And while 20th century First Ladies have enjoyed an office staff to support them in their duties, none of those duties have ever been made clear, leaving it up to individual First Ladies to decide for themselves how they would interpret this ill-defined, unpaid, but highly visible position.

For Dr. Biden, that apparently means breaking with the tradition of not having a job outside of that of First Lady. And yet this break is not one of protocol, but custom. Moving forward, perhaps future First Ladies (and Gentlemen) will enjoy the careers they’ve built for themselves rather than commit themselves wholly to their husband’s. It’s a prospect President-Elect Joe Biden seems not only to support, but appreciate. In his victory speech on Saturday night, Biden praised his wife’s commitment to education. “Teaching isn’t just what she does: it’s who she is,” he said. “For American educators, this is a great day for y’all; you’re going to have one of your own in the White House.”