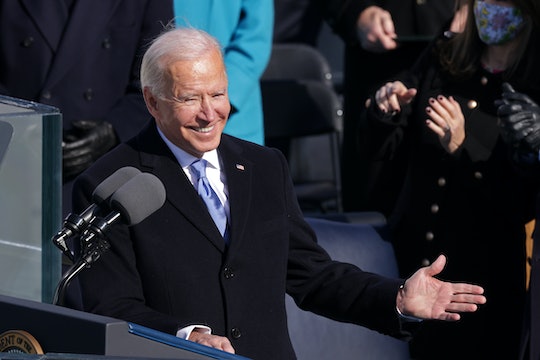 As President, there's always someone trying to get Joe Biden's attention. Some of those people, however, are a lot more important than others... like his granddaughter Naomi, who played Mario Kart with Biden at Camp David over the weekend. (You'll never believe who won.)

Biden made his first visit as 46th President of the United States to Camp David this weekend, MSN reported, where he made a point of getting in a little gamer-style relaxation.

"Secret Service made an exception and let him drive himself!" Naomi, 27, captioned a shot of the pair competing at the arcade game on Instagram, adding, "A little rusty but he still won (barely)."

Presumably President Biden has some previous Mario Kart driving experience, since Naomi called him "rusty" (and still, he won). There certainly is something to be said for having a leader who has experience bonding and having fun with his family. Who knows, maybe President Biden was quite the gamer at some point. At any rate, he's still somehow beating his grandkids at video games. That's nothing but impressive.

Naomi also posted two shots of President Biden wearing a new jacket and hat, noting that they bought his some "swag" since "it's President's Day weekend and he's 'literally' President."

Somehow it seems unlikely the job title will "go to his head" (unless we're talking about the title of Mario Kart champion).