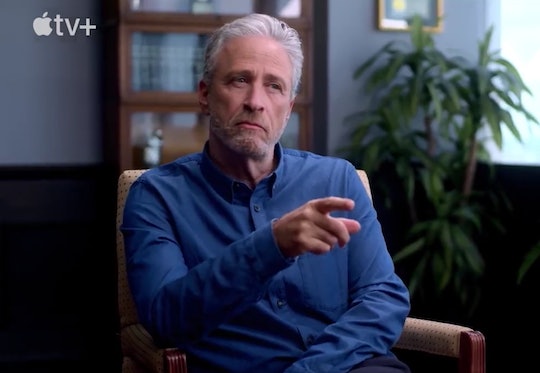 “What are your qualifications to step in and say ‘No, keeping you from that care is protecting you.’”

For decades, comedian Jon Stewart has been known for his ability to ask thoughtful, incisive questions of those in power, whether as the host of The Daily Show, through his advocacy work on behalf of 9/11 first responders and veterans, and even Late Night guest spots alongside his one-time colleague Stephen Colbert. In his latest episode of AppleTV+’s The Problem with Jon Stewart, he’s taking his trademark style of comedy journalism in a polite but relentless interview with Arkansas Attorney General Leslie Rutledge regarding the state’s ban on providing gender affirming care for trans youth.

In 2021, Arkansas lawmakers passed House Bill 1570, even after a veto from Republican Gov. Asa Hutchinson, who declared the bill a “vast government overreach.” The bill, which was titled “Save Adolescents From Experimentation” or “SAVE,” was unequivocally rejected by both civil rights advocates and the American Academy of Pediatrics (AAP). While the bill is currently being challenged in courts, with another trial scheduled for this month, HB1570 (also known as Act 626) would ban gender affirming care — including ongoing and reversible care such as puberty blockers and hormones from minors — and make doing so a felony.

In the now viral interview, Stewart sat down with Republican Attorney General Leslie Rutledge, whose stance asserts that the law has been designed to protect children from “irreversible” medical treatments. Highlighting the fact that the legislation flies in the face of major governing medical bodies — including the American Medical Association, the AAP, and the Endocrine Society — Stewart pressed Rutledge on why the state of Arkansas would override those guidelines.

“For every single one of [those experts],” she asserts, “there’s an expert that says we don’t need to allow children to be able to take those medications.”

“Right,” Stewart replies, “but you know that’s not true.” When pressed, Rutledge could not name “off the top of her head” the name of the medical organizations that supported her claim, but went on to say that “98% of the young people who have gender dysphoria ... are able to move past that once they have the help they need.”

“Wow,” Stewart deadpans. “That’s an incredibly made up figure.” (The statistic appears to come from the Society for Evidence Based Gender Medicine, which the Yale School of Medicine described as making “medical claims [that] are not grounded in reputable science and are full of errors of omission and inclusion” and claimed the organization was “without apparent ties to mainstream scientific of professional organizations.”)

At one point in the interview, Stewart asked Rutledge whose guidelines she would follow for a child who had pediatric cancer. She admitted she would seek the counsel of her doctor, but added that if the doctor said something she didn’t agree with that she would seek a second opinion. “And that’s what I believe [parents of transgender children] need to make sure they’re encouraged to get numerous opinions.”

“But you’re not letting them,” Stewart interjected calmly. “The state’s not saying ‘get another opinion’; what they’re saying is ‘you can’t.’”

Stewart went on to press his pediatric cancer analogy in regard to standards of care, which Rutledge decried as not being “at all in line” with the issue of gender affirming care for trans youth, bringing up parents who have lost children to pediatric cancer.

“I’ve got some bad news for you,” Stewart says. “Parents with children who have gender dysphoria have lost children to suicide and depression, because it’s acute.”

You can watch a clip of the interview below or on YouTube. The full episode, including the entire interview between Stewart and Rutledge, can be seen for free on AppleTV+.

Stewart interviews Rutledge for his latest episode of The Problem with Jon Stewart.

While some on social media have denounced Stewart as a “groomer” (in some cases via very thinly-veiled anti-Jewish bigotry), and others have dismissed the interview as “the bare minimum” level of respect and allyship for trans people, many more have praised Stewart’s straight-forward, respectful-but-not deferential interview style. Veteran reporter Dan Rather referred to it as a “master class in the art of a news making interview.”

“I grew up watching The Daily Show and had so much respect for Jon Stewart,” Alejandra Caraballo, a Clinical Instructor at Harvard Law School's Cyberlaw Clinic tweeted. “After this year of allies staying quiet, it's been such an amazing feeling watching Jon handle this with grace and compassion while being such a great ally.”

Chase Strangio, the Deputy Director for Transgender Justice with the ACLU's LGBT & HIV Project, praised not only Stewart’s interview but his team’s preparation to cover the story. “In addition to departing from the media norm of letting lying politicians go unchallenged, Jon Stewart’s team decided to actually learn a lot going into this episode so they understood the lies and also the reflexive biases we all carry. Let this be a model to everyone else.”

More Like This
Hero Who Tackled Colorado Gunman Was At Nightclub With Family To See Drag Show
Here’s How To Watch 'A Charlie Brown Christmas' This Holiday Season
"Corn Kid" Handed Out Over 40,000 Cans Of Corn At A Food Bank Ahead Of Thanksgiving
This Year's White House Holiday Decor Features Wooden Cutouts Of The Biden Family's Pets