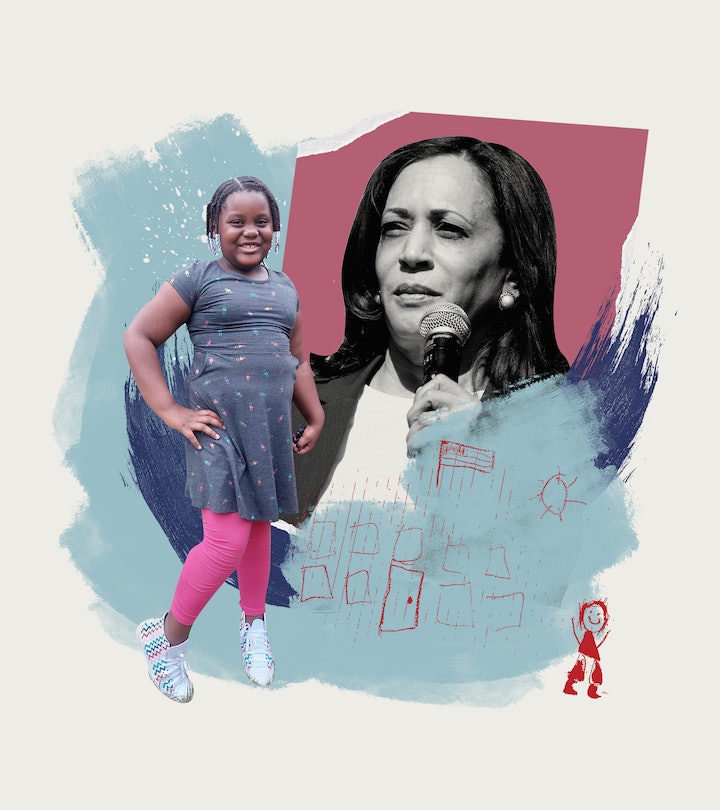 "Before Kamala came, there weren’t any Black girls that were president or vice president. That made me so sad."

When Naomi, age 7, heard the results of the 2020 presidential election, she had big thoughts about how monumental this event was for women and girls of color across the world, and wanted to tell others about it. Naomi wanted to make sure she mentioned how she is perceived as a Black girl, the allies in her life, and her hopes and dreams for the future as this glass ceiling was shattered.

As told to her mom, Meg St-Esprit.

My parents let me stay up late to hear Kamala Harris speak when her and Joe Biden won the election. His real name is Joseph R. Biden Jr., by the way. Out of all the votes in the whole country, when they counted all the votes, it was my city of Pittsburgh that made the news say who won. We had enough votes here to make it happen. Almost all our neighbors have Biden Harris signs and Black Lives Matter Signs. All our neighbors were clapping and screaming on their porches. We were so excited. Even our neighbors who don’t have Black people in their families say Black Lives Matter. Me and my best friend Henrietta say loud, “BLACK LIVES MATTER!” It makes me feel very, very good in my heart that she thinks that.

I stayed up until 10 p.m. to hear the speech. She said I am the first Black woman to be vice president. But is she going to be the last one? NOPE! And then at the end Joe Biden talked and all his family hugged and kissed him because he loves his family. His wife is a doctor which is really cool too. First ladies have jobs, like Michelle worked on healthy foods and Mrs. Trump works on bullying. Me and Kamala have the same sneakers — they are called Converse. Mine have rainbows though and hers are black and white. Since she said she is not the last Black vice president, that means I could be Vice President someday, obviously. Or even president. With my sneakers.

Before Kamala came, there weren’t any Black girls that were president or vice president. That made me so sad. They were all boys, and all of them were white boys except Barack Obama. I wish he was still our president and I am not really sure why he is not anymore. But we learned about how you can’t be president forever, and how George Washington taught us to not be president forever. He was for eight years, and now everyone does the same as him with two chances for four years. (Except one guy when there was a war.) When George Washington was president he said we should treat the next president good and welcome him into the White House. I am worried that President Trump hasn’t done that yet but I hope he will. We listened to a song by George Washington from Hamilton where he teaches us to say goodbye to a president when we get a new one. (I love Hamilton most when all the sisters sing, though.)

Before people like Martin Luther King Jr. and Kamala Harris did hard work for people, we couldn’t all be friends.

Sometimes the world doesn’t treat Black girls good which makes me feel badly. It makes me angry and frustrated because Black girls are awesome and we are as smart as any boy can be. A long, long time ago, people were so mean to Black people and kicked and hit them and made them slaves. We weren’t free to be people. Then more people worked hard to make them free and do more and more things. Before, you couldn’t share toys or water fountains or even schools. Our school has so many people that are white, Black and brown, and who talk other languages and come from other countries. My friend Mahamad’s dad speaks Somali. My friend Yoselin speaks Spanish. We are all friends, though. Before people like Martin Luther King Jr. and Kamala Harris did hard work for people, we couldn’t all be friends.

If I could talk to Kamala Harris, I would tell her I love you because you are a good woman and a vice president and I am very happy. I would tell her I got a Democracy for Daisies merit badge in Girl Scouts this weekend for drawing a picture of her at the White House in her sneakers. I wish for when she is vice president that she would work on helping people be very kind to the people who are being mean to Black people. If we are very kind to the mean people, maybe they will be kind to us back. But if they aren’t kind and don’t change, then she needs to tell the mean people to stop and make laws for them to stop so we can keep all people safe.

I love you and thank you, Vice President Kamala. We are going to skip our zoom school on the day you get into office and have a party.