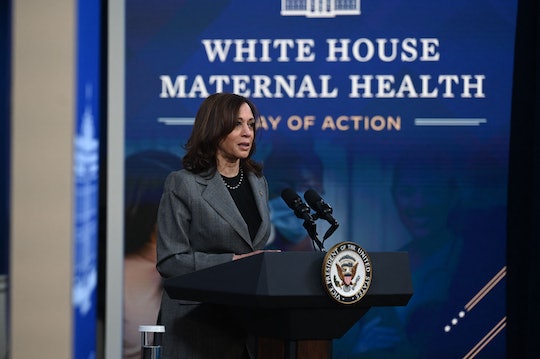 This will be the first hospital quality designation from the Department of Health and Human Services to specifically focus on maternity care.

Vice President Kamala Harris unveiled plans to improve maternal health outcomes in the United States on Tuesday as the White House marked its first-ever Maternal Health Day of Action. Along with plans to encourage states to extend Medicaid postpartum coverage and push Congress to approve a $3 billion investment in maternal health, Harris also announced the creation of a government-issued hospital quality designation focused specifically on maternal health. Under the plan, the Department of Health and Human Services (HHS) will establish a “Birthing-Friendly” designation for hospitals, effectively letting patients know who has implemented practices that improve maternal health outcomes.

“This challenge is urgent, and it is important and it will take all of us,” Harris said Tuesday. “So, let us all say unequivocally, maternal mortality and morbidity is a serious crisis, and one that endangers both public health and economic growth, which means everyone is impacted by it. Because just think about it. Mothers are the backbone of our economy, and their children are the future of our economy.”

To help improve the nation’s maternal mortality rate, HHS will partner with the Centers for Medicare and Medicaid Services (CMS) to designate birthing-friendly hospitals. “This is a brand-new designation and the first designation that rates a hospital based on the quality of its maternal healthcare,” Harris said.

According to the White House, the designation is intended to award hospitals that opt to participate in a collaborative program aimed at improving maternal health outcomes through the implementation of patient safety practices and other best practices. The designation will be added to CMS’ “Care Compare” website to give patients the ability to choose a hospital that has prioritized improving maternal health.

Harris has also said the White House will push states to extend their Medicaid postpartum coverage to a full 12 months. Currently, states are only required to provide coverage for the first 60 days of the postpartum period despite research showing many maternal deaths occur beyond that time frame. The White House is also encouraging members of the Senate to pass President Joe Biden’s Build Back Better Act, which includes maternal health provisions such as a $3 billion investment in growing and diversifying the nation’s perinatal workforce, improving risk monitoring, data collection, and research, and addressing social factors that contribute to poor maternal health outcomes.