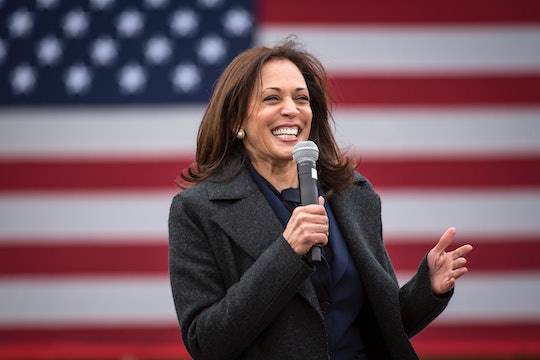 Ilana Glazer explains how Kamala Harris went from a young girl in Oakland to the White House on the Good Night Stories for Rebel Girls podcast.

As an entertainment media company driven by a mission to inspire and empower young girls, it's no surprise that Rebel Girls has turned its attention toward the first woman to ever be elected vice president. The Good Night Stories for Rebel Girls podcast features Kamala Harris' story on the eve of her swearing-in.

More Like This
High School Valedictorian’s Speech Taking Aim At Texas’ Restrictive Abortion Law Goes Viral
What Can We Expect When The Bidens Meet With The Queen?
China Hopes New Three-Child Policy Will Boost Declining Birthrates
The Avengers Campus Is Open At Disneyland: Everything You Need To Know

"Once there was a girl who would represent a lot of firsts and would rise to become one of the most powerful people in the world," actress, writer, and comedian Ilana Glazer, who narrates this episode of the Good Night Stories For Rebel Girls podcast, said in its opening. "Her name is Kamala."

To tell Harris' story, Glazer takes listeners back to before the soon-to-be vice president was even born, detailing how her parents — both students at the University of California, Berkeley — met for the first time during a protest. Shyamala Gopalan, an immigrant from India, and Donald Harris, an immigrant from Jamaica, would go on to fall in love, get married, and welcome two daughters: Harris and her sister, Maya.

While Harris' parents would later divorce when she was 7, her mother was determined to see Harris and Maya grow up with a comprehensive understanding of both their Indian heritage and Black identity. According to Glazer, she ushered them from studies at the Hindu temple to an African American church and a Black cultural center.

The podcast then delves into one of Harris' first organizing efforts, which happened when Harris was just 12 years old. At the time, Harris was living in Montreal, Canada, after her mother accepted a research and teaching position at a nearby university hospital. But the apartment building the family had moved into had one rule Harris could not abide by: that children couldn't play on the building's front lawn. As Glazer tells it, Harris and her sister organized a protest among the children living in the building which ultimately moved the building's owner to do away with his "no playing on the lawn" rule.

After graduating high school, Harris moved back to the United States to attend Howard University, a historically Black university. There she double majored in political science and economics and joined Alpha Kappa Alpha, the first Black sorority to be founded in the U.S. Harris would later go on to obtain a law degree from the University of California, Hastings, before passing the State Bar of California to become a prosecutor in 1990.

Glazer briefly explains how Harris moved from a job in the Alameda County District Attorney's office to a position running the San Francisco District Attorney's Career Criminal Division before opting to run for district attorney herself. Her election victory made Harris San Francisco's first female district attorney and projected her into a political career that eventually led to jobs as California's attorney general, a U.S. senator, and finally, vice president.

You can share Harris' story with your child tonight, on the eve of her swearing-in as the nation's first female vice president and first person of color to serve in the role, by tuning in to the Good Night Stories for Rebel Girls podcast.