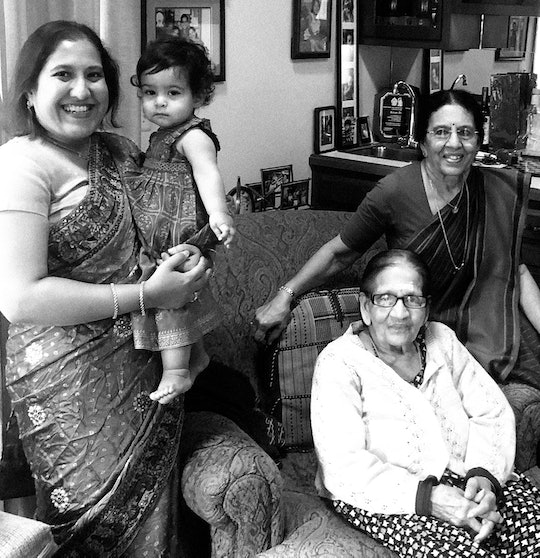 I Hope The Meaning Of My Daughter’s Name Will Guide Her Life, As Mine Ultimately Did

From mothers to daughters, our names tie us to our culture.

Both my Mother’s Days have been during the pandemic. In this time of turmoil and uncertainty, I’m grateful to have been able to spend them with my grandmother, mother, and daughter, marking the significance of motherhood across four generations of women and girls in my family. I’ve been reflecting on how we each arrive at who we are and particularly, how we come into our names.

Little is known about how my 96-year-old patti, or grandmother, got her name, Seethalakshmi other than the fact that her name evokes the Hindu goddess, Lakshmi, who confers wealth and prosperity from her perch atop a lotus flower. When Patti gave birth to her first child, my mother, she continued the tradition by naming her Kamala, which means lotus, a reference to Goddess Lakshmi. She named her second daughter, my beloved late aunt, Vanaja, another name for lotus.

The lotus seems emblematic of my mother’s journey as an Indian American immigrant.

The lotus seems emblematic of my mother’s journey as an Indian American immigrant. She remains strongly rooted to her homeland and culture, yet has pushed through the surface of her adopted country of the United States, soaking up and reflecting back all that she has become as an Indian American physician who has delivered hundreds of babies over her lifetime.

When, in the lead- up to the contentious 2020 election I first learned of Kamala Harris’ candidacy, I let a brand new sensation sink in: What it might be like to have a Black Indian woman named Kamala as our president. And then I called my mother.

“How will you feel if Kamala Harris becomes president?”

“Great, I won’t have to explain how to say Kamala anymore,” she joked. But then, more somberly: “I never thought this could be possible.”

My mother, who is quite traditional in many ways, broke the tradition of naming her daughters after Goddess Lakshmi. She named my elder sister Sangeeta, which means music, passing her love of music onto my siblings and me. We grew up learning to sing South Indian Carnatic music and play classical violin. My name came out of an obvious and frequent sing-song pairing: if a family has a daughter named Sangeeta, often their other daughter is named Kavita, meaning poetry.

Growing up, I was aware of how my name seemed different from my friends’ and often envied them. I searched in vain for pastel beaded necklaces bearing my name — Karen, Katie, no Kavita. As an adult, I came to appreciate my unique name, no longer viewing it as a burden or an outlier, but since I wasn’t an avid reader of poetry or prose, I didn’t relate to it on a personal level.

Eight years ago, however, my life unexpectedly shifted in ways that began to reflect my identity as Kavita. I left my fifteen-year career in social change to write the life story of Lakshmi Shankar, a Grammy-nominated singer who helped bring Indian music to the West in the 1960s. I’ve spent the last several years writing the stories of Shankar and other women of color. And last year, months into the pandemic, I took my first poetry class, falling in love with the way poetry offers both balm and antidote for my hyper rational mind.

The names of the women and baby girl pictured here reference the Goddess Lakshmi, lotus, poetry, tenderness.
Kavita with her patti Seethalakshmi, her mother Kamala, and her daughter Daya.
1/2

In 2019, I lost my first ever fur baby Gavin, my rescue dog who taught me so much about mothering, experienced the release of my Lakshmi Shankar biography, and was expecting the birth of my baby girl. As my husband and I poured through countless Indian baby names from both Hindu and Muslim traditions, many of them sounded beautiful to our ears, but either held lofty meanings having to do with ambition or victory, or were extremely gendered, focusing only on looks and beauty.

As I awaited finally becoming a mother at age 45, I realized despite the worship of strength in both my cultures, it is vulnerability and tenderness that helps us heal and renew our strength. So, I decided on the name Dayanita, or Daya for short, which means tenderness or compassion. My greatest wish for my now 18-month-old daughter is that through life's ups and downs, she keeps the tenderness I now see in her every day, from the way she kisses our boo boos when we get hurt, to the joy she exudes feeding treats to her canine sister, Harper.

As an Indian American and a child of immigrants, the naming of my child felt like not just a personal choice but a meaningful way to pass on my culture to my child. While I understand why fellow Indian American parents might decide to give their children Anglicized names or ones that are easier to pronounce for Western tongues, I was determined not to let those considerations dictate my choice of name and instead, like my mother, name my daughter after something meaningful I hope guides her life.

I hope that in the America in which Daya grows up, where her vice president and her grandmother share a name, she will never feel like her own name is a burden but rather is like the stem of a lotus, grounding her while allowing her to break through, rise, and bloom.

More Like This
How Do I Rediscover My Sexuality When I’m Completely Touched Out?
OB-GYNs On How The End Of Roe Changes How They Can Care For Us
How To Ask Your Partner For Support When You Need It
Jenny Slate Played Our Parenting Edition Of Never Have I Ever & Here’s What We Learned