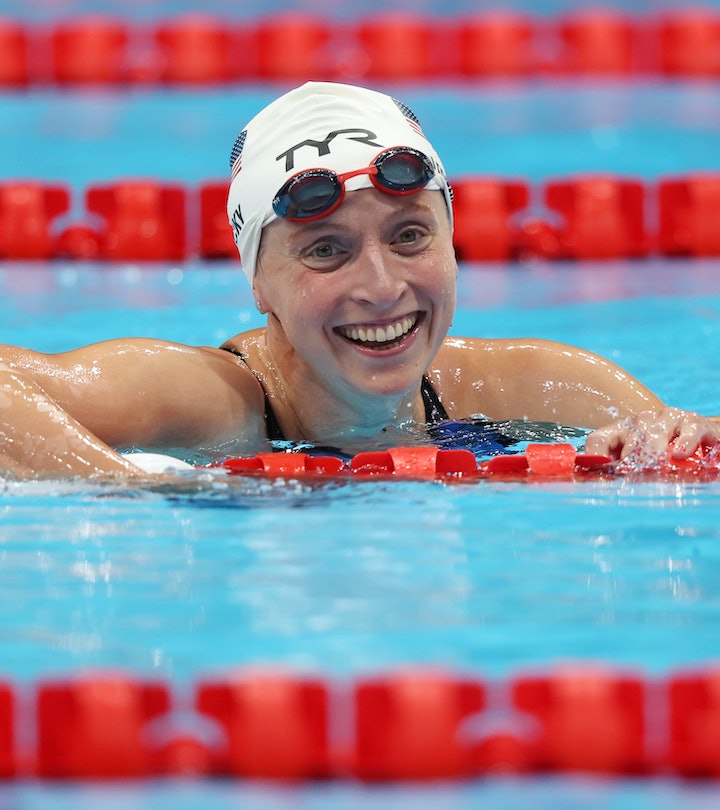 Katie Ledecky Isn’t The Only Athlete In Her Family

While the Olympian is certainly one of the world’s best swimmers, it seems she’s not the only one who likes taking a dip in the pool.

After swimming her way to five Olympic medals (four gold and one silver) and breaking her own world record in 2016, Katie Ledecky is well on her way to adding to her collection at the 2021 Tokyo Games. After suffering two losses to Australia’s Ariarne Titmus, Ledecky rebounded to win gold in the women’s 1500-meter freestyle race. And while Ledecky has most of the United States cheering her on, her biggest supporters remain those who know her best: her family. But it turns out Ledecky isn’t the only swimmer in her family, although it’s safe to say she’s definitely the fastest.

Widely regarded as one of — if not the — best female swimmers in history, 24-year-old Ledecky holds eight Olympic medals, 15 world championship titles, and a number of world records. It’s an impressive resume, one that was built on years of support from her family. From her parents who drove her to countless early morning practices and training sessions to her brother whom she grew up swimming beside in the pool, Ledecky’s family may not be chasing Olympic gold, but they’re not exactly strangers to the pool either.

In an interview with ESPN, Ledecky’s mother, Mary Gen (short for Mary Geneviere), revealed she’d been taught to swim along with the rest of her six siblings after an older sister fell off a dock and nearly drowned at the age of 4. Eventually, Mary Gen moved from swim lessons to competitive swimming, earning a spot on the University of New Mexico’s swim team.

According to the Albuquerque Journal, Mary Gen qualified for nationals three separate times and was ranked among the top 20 swimmers in the 200-meter freestyle. “Everyone loved Mary Gen,” University of New Mexico President Robert Frank, who was an assistant swim coach at the university during at least part of Mary Gen’s time there, told the newspaper. “She was always very positive, got out of the pool and cheered for her teammates, and she was a really good swimmer, too. We all thought she was great until we saw Katie.”

While Mary Gen may not have swum near as fast as her daughter, her former coach Rick Klatt told Sports Illustrated he thought the two women shared the same willingness to work hard and give every lap everything they had. “Every set she did in practice, every race Mary Gen swam, she was as tired as anyone could get,” Klatt, who coached Mary Gen at the University of New Mexico, said. “Katie’s at a different level, but her mom was that kind of worker. I can remember her heaving for air after races. There was never any lack of effort in any workout or any meet. She was going after it as hard as she could.”

Mary Gen now lives in Bethesda, Maryland, where she serves on the Board of Directors for Children’s National Children’s Hospital.

Ledecky’s dad, David, doesn’t appear to have ever swum competitively. Instead, he studied at Harvard and Yale before going on to work as an attorney. Of course, that doesn’t mean he ever shied away at driving a younger Ledecky to 5 a.m. practices.

Interestingly, Ledecky has credited her older brother Michael with helping her get her start in swimming. In an interview with WBUR, Ledecky said it was 9-year-old Michael who wanted to join a summer league pool and swim team, and because then-6-year-old Ledecky always wanted to do everything her brother did, she joined too.

“I swam with my brother throughout that and always followed him to the pool and wanted to be in the same group as him in everything,” Ledecky told WBUR. “I just always enjoyed swimming with him and I think that's how I really found my love of the sport. I think if I didn't have my brother swimming with me, I don't know if I would have loved it as much as I did and still do.”

Of course, it wasn’t too long before Ledecky was easily beating Michael’s best times in the pool, despite their three-year age difference. In fact, Michael told Sports Illustrated that when Ledecky was just 13, the times she clocked in her 1,500-meter freestyle splits beat all of the best times he’d managed in significantly shorter events like the 200-meter, 400-meter, and 800-meter events.

To his credit, Michael doesn’t appear to have harbored any ill feelings toward his sister. Rather, he’s often seen cheering Ledecky on from the stands. He graduated from Harvard in 2016 and is now pursuing a Master of Business Administration.

Ledecky’s uncle is also no stranger to water, although he may be more familiar with it in a different form: ice. Jon Ledecky is a co-owner of the New York Islanders, an NHL team that made it to the Stanley Cup semifinals earlier this summer before being pushed out 3-4 by the Tampa Bay Lightning.

According to Sports Illustrated, the Ledecky family is a close one — even when the concerns and precautions related to the coronavirus pandemic dictated they remain physically distanced. While locked down for training in Palo Alto, California, Ledecky FaceTimed her parents daily and joined her brother and cousins for game nights hosted over Zoom, the magazine reported.