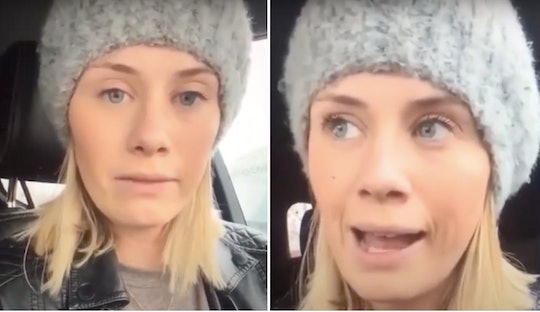 Katie Sorensen's story about strangers allegedly trying to kidnap her children outside a craft store was debunked shortly after it went viral in December 2020. No charges had been filed against her, until now.

When mother and social-media influencer Katie Sorensen shared frightening allegations of an attempted kidnapping in December of 2020, her story quickly went viral, sparking renewed conversations about child trafficking. Within days, however, Petaluma police announced the allegation was without merit. Months later, on April 29, Sonoma County prosecutors announced Sorensen will face two misdemeanor charges, including giving false information to the police, and may face up to a year in jail.

The charges stem from an event Sorensen claimed happened at a Michael’s store on Dec. 7. “My children were the targets of attempted kidnap,” Sorensen said in a now-deleted video uploaded to her @motherhoodessentials Instagram account (which has also been deleted). “I want to share that story with you in an effort to raise awareness.” Sorensen claimed a man and woman, later identified as Sadie and Eddie Martinez, parents of five, followed her into the store after observing her loading her 4-year-old son and 1-year-old daughter into their stroller in the parking lot. Sorensen told local Fox affiliate KTVU she heard the couple commenting on her children's physical features while she shopped, but ultimately didn't confront them or say anything about their behavior as she was "paralyzed with fear."

Sorensen alleged that the couple followed them out of the store and into the parking lot, where the man reached out toward Sorensen "as if to grab the stroller," KTVU reported. That's when Sorensen said she yelled for help, causing the couple to take off in a car.

In a press release put out at the time, the Petaluma Police Department confirmed Sorensen came to them to report "suspicious behavior exhibited by two adults" but said her Instagram videos contained "information" and "inconsistencies" Sorensen had not disclosed to them. Later, local law enforcement said they found “no evidence or witnesses” to corroborate her allegations.

Public backlash was swift, with many, including the couple in question, accusing the influencer of racial profiling (the Martinezes are Latinx). Police also noted that Sorensen had told them she "did not want anyone arrested" and instead merely wanted "to draw attention to the concerning behavior."

But according to reporting from the Argus Courier, the Martinezes have campaigned for months for Sorensen to face consequences for her false and very public accusations against them. Sadie, who was appointed to Petaluma’s citizen-led advisory committee on policing and race relations in the wake of the charges, told the Courier, “We’re very happy with the news. It’s a nice step toward justice. It gives you hope.”

Sorensen has been charged with two misdemeanor counts of making a false report of a crime and her arraignment is scheduled for May 13. According to KSRO, each charge has a “maximum penalty of six months in prison.”

Stories of alleged attempted kidnapping are alarming for any parent to hear, and it's not altogether surprising that Sorensen's videos garnered millions of views before she made them private. But just how frequently do kidnappings like the one she described occur? Statistics show that such abductions are quite rare.

An abduction attempt like the one Sorensen described, in which strangers make an effort to take a child, is classified as a non-family abduction or stereotypical abduction. According to the National Center for Missing and Exploited Children (NCMEC), non-family abductions are the rarest type of missing children cases, making up just 1% of the missing children cases reported to the organization.

Data from the FBI has also shown the rarity of non-family abductions. In 2019, the FBI told Reuters that fewer than 350 people age 21 or younger had been abducted by strangers per year since 2010. In fact, the FBI reported that abduction by a stranger accounted for just 0.1% of juvenile disappearances in cases where the circumstances of the disappearances are recorded.

A Majority Of Missing Children Are Not Abducted

More than 95% of missing juvenile cases end up being a situation where the person in question ran away on their own, the FBI told Reuters. This statistic is consistent with data from the Polly Klaas Foundation, a nonprofit formed in 1993 to assist in the recovery of missing children and the prevention of crimes against children.

According to the Polly Klass Foundation, roughly 90% of missing-child cases stem from situations in which children have run away, gotten lost, misunderstood directions, or failed to properly communicate their plans to adults. In contrast, the Polly Klass Foundation has reported that approximately 100 children — representing only a fraction of 1% — are kidnapped by strangers each year.

Children Are More Likely To Be Kidnapped By A Family Member

Data from both the Polly Klass Foundation and NCMEC show that children are significantly more likely to be abducted by a family member or someone they know. This is also true in cases of child sex trafficking, according to Polaris Project, a nonprofit dedicated to combating human trafficking.

Of course, while rare, non-family child abduction do happen, meaning it's important for parents and caregivers to know where children may be most at risk. According to an analysis of 10 years of attempted abductions NCMEC conducted, most attempted child abductions occurred while a child was going to or from school or other school-related activities. Subsequently, the analysis also found that the majority of abduction attempts occurred on the street.

More Like This
Over 10,000 Sippy Cups & Bottles For Toddlers Recalled Due To Lead Poisoning Hazard
Viral Reddit Post Asks If A Toddler Can Watch Cartoons Without Headphones On A Plane
Here Are Parents' Top Trending Searches In 2022, Because Google Really Is Our BFF
"Corn Kid" Handed Out Over 40,000 Cans Of Corn At A Food Bank Ahead Of Thanksgiving

This article was originally published on Dec. 17, 2020