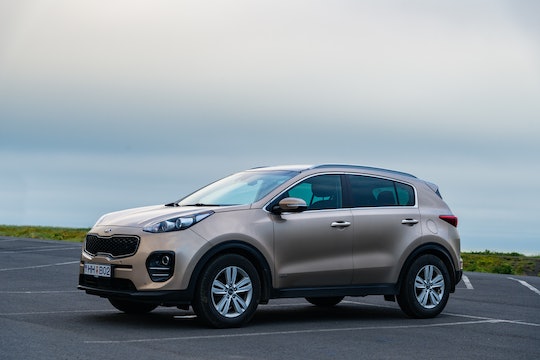 Kia Is Recalling Over 372,000 SUVs & Wants Owners To Park Away From Their Homes

Kia recalled nearly 380,000 Sportage and Cadenza models over concern fires could break out in the engine compartment.

A South Korean automotive manufacturer is warning some owners to park their vehicles outside and well away from their homes following a recall spurred by a potential fire hazard. Kia has recalled nearly 380,000 cars and SUVs over concerns an electrical component could short circuit and cause a fire in the engine compartment.

Some 379,931 Sportage and Cadenza vehicles not equipped with Kia’s Smart Cruise Control were recalled Tuesday, according to an alert from the National Highway Traffic Safety Administration (NHTSA). The bulk of the recall includes select Sportage 2017-2021 models manufactured from the end of 2015 through October 2020. At least 372,250 Sportage vehicles are expected to need updating as part of the recall, according to NHTSA’s official recall report. Another 7,680 2017-2019 model year Kia Cadenza vehicles manufactured from June 2016 to June 2019 are also included in the recall.

NHTSA has cautioned owners of Kia’s recalled vehicles who may traditionally park in a garage or driveway to relocate their vehicle, noting the “safest place” to park was outside. “Owners of select Model Year 2017-2021 Kia Sportage and Cadenza vehicles should park their cars outside and away from homes until their vehicles have been repaired, due to a new recall for the risk of fire,” NHTSA said.

According to NHTSA, Kia issued the recall over concerns an electrical circuit within the vehicles’ hydraulic electronic control unit could short circuit, resulting in an excessive current that could ultimately lead to a fire in the engine compartment. Drivers may see various warning lights come up on their dashboard, including the tire pressure warning light, the ABS warning light, and the MIL warning light. Additionally, drivers may begin to notice a burning smell or melting odor and see smoke coming from their vehicle’s engine compartment.

Kia owners can check if their vehicle is included in the manufacturer’s latest recall — as well as any other recalls — by entering their 17-digit vehicle identification number at either the Kia Owner Portal or NHTSA’s recall website.

While the issue behind Kia’s latest recall is certainly concerning, it is apparently correctable. According to The New York Times, Kia has said dealers can replace certain fuses in Sportage models and update hydraulic electronic control unit software to correct current fire hazard risks. Similarly, dealers can install a new fuse kit in Cadenza models.

Owners of affected vehicles should call their nearest Kia dealership as soon as possible to have the recall issue fixed at no cost to them.