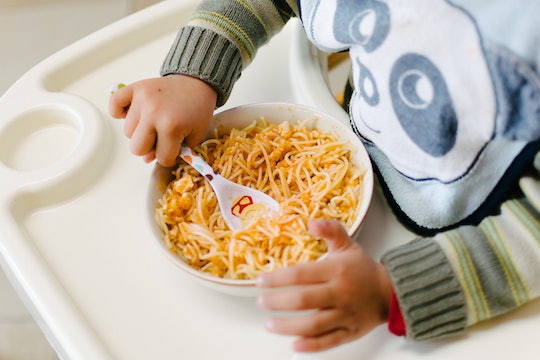 The Pandemic Has Already Had A Serious Impact On Kids' Development

According to new research, many are forgetting basic skills like potty training.

At the beginning of the coronavirus pandemic, parents, educators, and child experts feared school and daycare closures could have a devastating impact on children. Now, a new report from an education and children's services watchdog in the United Kingdom has concluded that the COVID-19 pandemic has negatively impacted children's learning and development. According to the report, a large majority of U.K. nursery schools and early year providers have reported seeing a regression of children's independent skills, such as potty training, dressing, and the use of silverware.

To better understand what impact the COVID-19 pandemic may have had on children's development and education, the United Kingdom's Office for Standards in Education, Children’s Services and Skills, which is more commonly known as Ofsted, interviewed nearly 1,000 education and social care providers between September and October. Among nursery schools and early years providers who care for children ranging in age from birth to 5 years old, Ofsted found a concerning trend.

"Almost all providers said that the pandemic had significantly impacted the learning and development of children who had left and subsequently returned," Ofsted's report read. "They were particularly concerned about children’s personal, social, and emotional development. Some children had returned less confident and more anxious. In some cases, children had also become less independent, for example returning to their setting using dummies [or pacifiers] or back in nappies having previously been toilet trained."

When discussing the pandemic's impact on children, researchers grouped children into one of three groups: those who'd been able to continue receiving care with providers through lockdown, those who'd been removed from care but had been "well supported" at home by a parent or caregiver with ample time, and those who'd been removed from care but did not have a parent or caregiver at home able to spend much time with them. In the end, providers said the children who thrived or continued to make progress as expected were those who'd either continued attending their normal care provider or who had parents at home free to spend significant time with them.

"However, providers recognized that many parents experienced pressures, making it difficult for them to do this," Ofsted's report read. "This prevented some children from developing their language and communication and their physical skills. For example, some children had become more sedentary and others had become more reserved and withdrawn."

A tweet from Ofsted details how some children have regressed in basic skills as a result of the COVID-19 pandemic.

A total of 53% of providers surveyed told Ofsted they felt children's learning and development had "fallen behind" when it came to areas of personal, social, and emotional development. In fact, while four in five providers said children's math and literacy skills had not progressed as expected, personal, social, and emotional development was the area providers felt children had declined the most in following the U.K.'s national lockdown in March.

"One provider summed this up by saying that their children were ‘understandably disorientated’ after the first period of national restrictions," Ofstead's report read. "Many children were more anxious and had struggled when they first returned to the setting, finding it difficult to separate from their parents. Some children were less confident with others and slower to join in. Others returned using nappies, comforters, and dummies [pacifiers] at an older age than providers would usually expect."

Unfortunately, this regression isn't altogether surprising. Experts have previously told Romper that regressive behavior is not uncommon in children experiencing stress or frustration. "Regression is an unconscious defense mechanism caused by stress, frustration, and/or a traumatic event," Linda Snell, a therapist at New Method Wellness, told Romper in April. "Children usually manifest regressive behavior to communicate their distress, especially if they are unable to articulate what they are feeling because they do not understand what is happening or because they are experiencing uncertainty. Regression is a way for children to express that they are feeling insecure, angry, or scared, but lack the communication skills to share and/or understand these feelings."

But while a common side effect of stress, the regression of key skills can have long-term consequences for children and are therefore well worth paying attention to, especially as the United Kingdom settles into its second national lockdown. However, unlike the country's first lockdown, nurseries, schools, and universities are expected to remain open throughout the U.K.'s second national lockdown, according to the BBC.

"We have now entered a second national lockdown. This time, at least, schools, colleges and nurseries are to remain open," Her Majesty’s Chief Inspector Amanda Spielman said in a statement released alongside Ofstead's report. "That is very good news indeed. The impact of school closures in the summer will be felt for some time to come – and not just in terms of education, but in all the ways they impact on the lives of young people. As it was in the first lockdown, the work of teachers, social workers and carers, with the support of parents, will again be critical to the future success and happiness of our children."

More Like This
The Covid Vaccine For Kids Under 5 Has Been Sent To The FDA For Review
Should Parents Consider Delaying Covid Vaccines Until Closer To School Starting?
Elmo Talks About Getting His Covid Vaccine In A Cute New Video
You Can Schedule Your Kid’s Covid Vaccine Appointment At Walmart