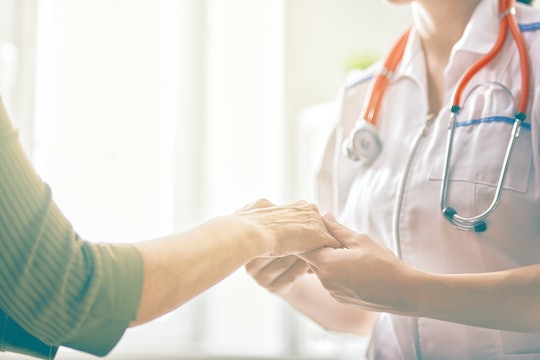 How Are Late-Term Abortions Performed? It's A Straightforward Medical Procedure

There’s a lot of misinformation out there.

When an unmarried woman known as "Jane Roe" filed a lawsuit in 1970 to challenge Texas laws criminalizing abortion, she likely didn't anticipate the long-term repercussions her court battle would have on America. It's been 43 years since Roe v. Wade, but the controversy over a woman's right to terminate her pregnancy has never faded from public consciousness. In the ensuing decades, the nation's highest court would repeatedly be asked to review cases related to abortion restrictions, with many opponents of the procedure working to get Roe v. Wade overturned completely. The issue becomes especially heated during presidential elections, since presidents are tasked with nominating new Supreme Court justices and a conservative or liberal majority on the court has the potential to significantly impact future rulings on abortion rights.

Further complicating the abortion debate is that many aspects of the procedure are often distorted, from what happens during an abortion — especially during the later stages of pregnancy — to how common late-term abortions really are. Late-term abortion methods are also misunderstood.

How Common Are Late Term Abortions?

Though they are commonly invoked by the anti-abortion movement, late-term abortions (those performed after the 20th week of pregnancy are incredible rare and third-trimester abortions are actually illegal in most states. According to the Guttmacher Institute, just 1.3% of abortions occur at the 21st week or later. The vast majority of abortions (more than 98%) are performed within the first 12 weeks of pregnancy, a.k.a. the first trimester. No abortions are performed in the ninth month of pregnancy; options for intervention at that point include an emergency C-section or induced labor, which happens in cases where the fetus might be in distress or the mother's life could be threatened if she carries the child to term.

What Are Late-Term Abortion Methods?

Late-term abortion procedures are performed in one of two ways, says OB/GYN Dr. Alan Lindemann, M.D. “With dilatation and evacuation (D&E), the cervix is softened with seaweed (laminaria) and partially dilated before the patient is anesthetized. Then, under anesthesia, the seaweed is removed, the cervix further dilated, and the fetus removed in pieces. This procedure is usually used at 15 to 19 weeks,” he says. “From 19 to 25 weeks, the cervix is softened and labor induced with prostaglandins.”

I think that the public perceives, first of all, that late abortion could be completely eliminated if people would only get their act together and have their abortions earlier, which is completely untrue. I also think that people assume that women do this casually  —  that they’ve known they were pregnant for 30 weeks and then were on their way down to the hair salon and they saw the abortion clinic and they decided to just walk in to avoid the inconveniences of motherhood. That also is completely untrue. No matter how available birth control and first-trimester and second-trimester abortion is, you are always going to have the need for later abortions. A woman would never do this casually. The procedure lasts three or four days, and is fairly disagreeable.

This article was originally published on Oct. 25, 2016